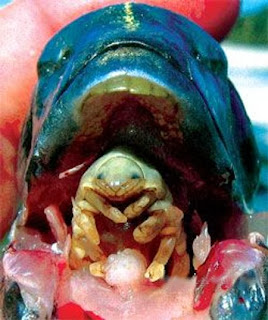 Every type of spell has a demon associated with it.  When the magic mouth spell goes awry, sometimes it creates a Voroglossus, commonly known as a tongue demon.

In its mobile form, a voroglossus is about the size and shape of an inside-out german shepherd.  It's rear legs and tail are fused in a sort of "skirt" of annular horns and muscular tissue.  Like all demons, it is a creature of whimsy, cruelty, and ignorance.  It has the unique--and feared--ability to shrink itself so that it can replace a person's tongue.  Then it sets itself up in the poor victim's mouth as a sort of oral tyrant.

Stealthy: A voroglossus has a 3-in-6 chance to surprise alert creatures.

Replacement: The voroglossus can only perform this operation on helpless or sleeping creatures.  In the blink of an eye, the voroglossus devours and replaces a tongue, after shrinking itself and attaching to the ragged stump.  It leaves behind a greasy husk of skin, usually folded beside the victim.  The demon uses an anesthetic, and so victims may not feel anything until they wake up to find a faint taste of blood in their mouth and a lack of sensation in their tongue.

Tongue demons imitate tongues with near perfection, and they can read intentions from the remaining nerve roots.  They may choose to keep their presence quiet, and allow their host to speak and eat normally.  Eventually, they make their demands known, but only when they are certain they can coerce their victim. 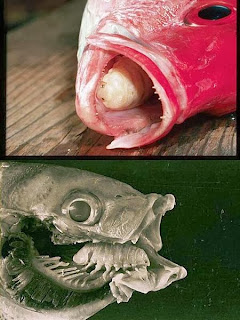 What do tongue demons want?  Delicious food, wine, sloppy make-outs, to lick interesting/magical objects, to give speeches, and to learn languages.  If the host is a spell-caster, they will be especially desirous to cast more magic mouth spells, which is a syrupy, carnal pleasure for their physiognomies, and which may put them into a temporary stupor.

They usually demand open-mouthed breathing so that they can see past the teeth.

Additionally, if a voroglossus suspects that its host is plotting to eliminate it, it may revert to its full-size form and escape, or more likely, kill their treacherous host.  They may even use subtler means, such as shouting blasphemies in the temple, insulting the judge during the trial, and then escaping once the host has been executed.  Abandoned hosts often miss their super-tongue.  They also miss being able to talk.

Is there an upside to this?  Well, yes, if you stay on its good side.  The tongue demon can argue very persuasively on your behalf (Cha 12+1d6, maybe give it some skills if you use 'em) and can speak 1d4 languages (which the host may not understand). 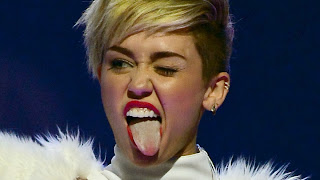