I Killed All The Humans

I killed all the humans today.  At least in one of my settings.  Maybe I was a little bit inspired by Pars Fortuna.  Maybe I wanted to force my PCs to wear more interesting hats.

I've decided to replace them with almost-people.  Races that are close enough to good ol' homosapiens that the old tropes still apply, but that are weird enough that you'll never forget you aren't playing a human. 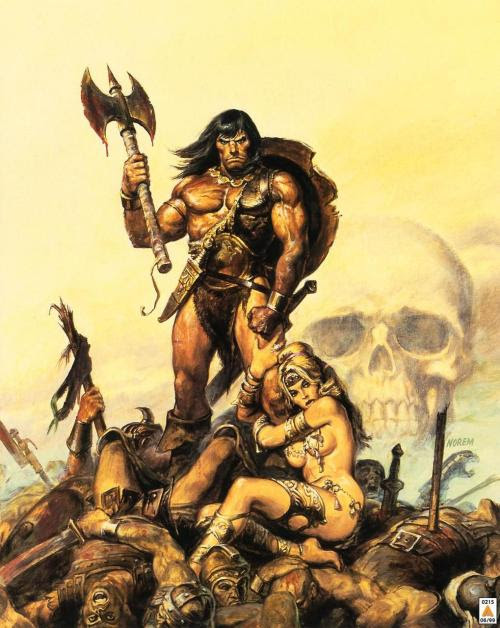 I started with the most generic ideas.  The next batch will be weirder.

I've including some alternate names for each race, ranked in order of least to most insulting.  I've also included some setting information where it thought it was interesting.

The Afner are the dog-riders, the merchants, and the river-people of the middle lands.  Their skin and hair comes in all possible shades of brown.  They lack body hair, and the hair on their head never grows longer than a few inches.  They have dangerous childbirths (big baby, small people), and pregnancy is a time of both joy and fear.  They rarely grow any taller than 4’.

Perhaps as a reaction to those who would rob, rape, or otherwise take advantage of their small size, many of them follow a brand of machismo called rontay. This attitude is most visible when interacting with people larger than them.  At its best, rontay means accepting responsibility for your actions, taking care of your women and your family, and a willingness to sacrifice.  At its worst, rontay means being dismissive of women, quick to anger, and quicker to violence.

Don’t fuck with Afners.  Nine of them will come to your house and murder you in your sleep.

Afner have a reputation for being family minded.  They often send letters and souvenirs back home, and single Afner are famous for aggressively spouse-hunting.  Male Afner have a reputation for being prickly, angry, and stubborn—although they can be very affectionate and reasonable among friends and family.  Most have a story or two about some brave thing that they’ve done.  They’re also known for travelling with an animal (dog, wolverine, giant cat, guard rooster), being excellent cooks, eating a lot of fruit, and abhorring slavery.

Bashani are keen and tempestuous.  Unless they are tanned a healthy bronze, they turn a vegetable yellow color.  Their blood is bright orange and glows in the dark (unless they are sick).  They live on the Red Continent, separated from the other known lands by the Valdine Sea.  They are small of stature, with women rarely growing taller than 5’ and men rarely reaching 5’6”.  Their eyes are brilliant blues and greens, while their hair is dark.  Uniquely, many of them have horns—from stubs to full gore-spikes.

In the nation of Basharna, buildings are painted all the colors of the rainbows, and prayer wheel-windmills fan their vibrant message over the skyline.  Heaving jungles choke the cities in humidity, and tropical birds infest the streets, where they defecate on fruit vendors.  People walk around in all manner of dress (and undress), but the colors are always vibrant.  Celestialist “princesses” perform sexual exorcisms, while Celestialist “princes” water trees with rum in order to produce enchanted woods.  The crossroads are studded with totem poles and everyone wears eyeshadow made from lead sulfite (kohl).  They are famous for bland food (yaga tubers, puddings, cheeses, breads) and salted fish.  Horns are seen as prestigious, or at least attractive, and Bashani with horns decorate them with all sorts of shit: paint, beads, little flags, jewelry, etc.

Gileans are the most populous race, and can be found all over the east.  Their skin is as white as chalk (although it turns coal black when submerged in water).  They are of average height and build.  Their hair is always pure black, but their eyes are often of any color.  Their lips and insides of their mouths (and other stuff, like inside their eyelids) are a very pale pink, almost as pale as their skin.

Gileans (and especially in Gafferdy and Noth) are reviled as eating some of the worst food in the world.  Blood puddings, rotten eggs, fermented fish, poisonous snakes, and pickled anything.  Seriously, they pickle everything in Gafferdy and Noth.  Even apples and mice.

Gileans are stereotyped as being introverted, melancholy, considerate, cautious, artistic, moody, sensitive, and insensitive.  Men are not ashamed to cry in Gilean culture, and it happens in public all the time.  Men wear beards.  Nobility shave one side of their head.   Both genders wear blush (to put some color in their cheeks).  Upon assuming the full responsibilities of a profession, many Gileans get tattoos (often on their face) to represent their chosen profession.  Most houses have a secret room, although small houses merely have a secret compartment.  Nearly all are trained in a martial art.

Noth is the biggest country on the Great Continent.  It has recently made several acquisitions around the world, and is entertaining ambitions of empire.  Riding their recent successes, the country feels optimistic.  They think they’re destined for greatness.  Their neighbors feel nervous.  The capitol is Teradar, a city of rain, draconian laws, and black iron fences.  Hyenas are common pets there, and nobles grow vanity cats that spend their entire lives in jars no larger than they are.

Found all over the East, but especially in Kaskala.  Their skin is a dusty red.  Their hair, fingernails, teeth, and bones all appear to be made from golden-red copper.  You can see your reflection in their fingernail.  Many are vain of their resplendent hair and fingernails, and dress to show them off.  They are of medium height but tend to be broad shouldered and barrel-chested.  Their blood is also poisonous to plants.  Nothing will grow on ground where their blood has been spilled.  At least for a generation or so.

Lassics have a reputation for being proud, stuffy, sluggish, fat, balding, calm, rational, curious, afraid of change, lovers of comfort, lovers of food, accepting, open-minded, lazy, observant, and possessing a good memory.   Whenever there’s a Lassic in a joke, he’s always the one who tricks someone else into doing his work for him.

The second-most prolific race of man, Medurans are common in all of the temperate regions west of the Elterspine Mountains.  Their skin ranges from red-brown to wine-red to almost purple.  They tend to be tall and lithe.  They eat noodles, chickens, and (vast amounts of) spices.  Their hair and eyes are dark.  Their fingernails grow slowly, but are as hard as rocks and naturally sharp.  They have sharp teeth as well, having one fewer incisor and one extra canine in their mouths.  They have a strong bite, and sometimes impress foreigners by biting sticks in half.

The predominant religion of the continent is called Hesaya, which holds snakes sacred (along with the color blue and the number nine).  Medurans have long claimed to be blessed by the goddess Iasu, since they can become immune to its poison.  It's not uncommon to see Asrian (Meduran) monks travelling the countryside with tiny blue vipers coiled up on their shaven heads like a skullcap.

Medurans have a reputation for dreaming, arguing over hypotheticals, noodles, horseradish, spicy food, long braided hair (both genders), generosity, leadership, non-lethal duels, drunkenness, drug use, petty thievery.  In some places, minor thievery is so common that it’s barely considered a crime.  Young adults to run away from home—women to avoid suitors and men to get rich.  Women sometimes run away even though they don’t have suitors, and men sometimes search for treasure in foreign brothels. . . but hey, that’s culture.

The Nikal are live in the cold south, around the Alcyon Ocean.  Their skin and hair are black.  They are known for being tall and broad-shouldered.  Most of them have golden-brown eyes.  They often wear leathers and furs, and almost universally—boots.  Magicians are rare among them.  They lack pinky fingers and find it hilarious when other people have them.  They sleep standing up, and so their houses often lack beds.  If they saw a bed, they might only recognize it as "a fucking couch".  Many of them sleep with their eyes open, as well.  This is at least partially cultural, and Nikal that live in foreign countries long enough eventually abandon the weird sleeping habits.

In the region of Fangol, the Nikal ride bull-horses (godons) and huge, predatory birds (rhakenkas) across the snowy prairies.  Fangol was once a great empire, before it collapsed into barbarism.  In Talamasca, Scribes record the world’s history alongside giant caterpillars. Gangs of children rule the shaded streets.  No woman is as beautiful as a fat one.  They have an awkward currency: painted plates, the least of which is worth a horse. Fangolians fear—or at least respect—the terrible spirit known as the Dog King.

Along the Broken Coast, the Nikal live in warring city-states, who war with one another so that they might unite, and together fight off the sentient clouds who live in the hollow mountain called Revanoak, where they emit warping magics and servile hordes.  Needless to say, the people of the Broken Coast have earned a reputation for being some of the biggest badasses around.  They also drink a lot.

In the city of Ba Dwai La, the Nikal tend to strange, pink forests in the frozen tundra.  Their mystics imibibe effulgent liquors that they might dream for days.  The city has a twin, called Man Chiur  La, which is located on the moon, and a marketplace in the middle of each links the two.


If you want to create a half-breed (because all of the above races can interbreed), just grab a random bullet-point from each race.  Or pick one from each.

The personality traits are just suggestions.  Though, you might want to glance at the list to aid in character creation.

I've tried to make all of the racial bonuses mostly defensive or utilitarian, to discourage power-gaming.

I've tried to interpret Charisma as a stat of how concentrated your identity is, both personally and racially.  A goblin with high Charisma is more goblinish than his peers.  All of these six races get something for having good Charisma, and I think that's a cool application of the stat.

I was looking for a picture to go with the title, and I've learned that you should never google "pile of corpses" unless you want to feel sad.  That's why you're getting Conan today.
Posted by Arnold K at 12:25 AM