Mondaloa is the god of Peace and Death.  He is rarity among gods--one who has been allowed to remain in his place of origin, rather than being brought to heel in the Holy City of Coramont.

Peace needs some coaxing to occur, and in this he is always opposed by Avenglass, the god of war.  But it is Death that requires most of his attention.  Undead rise from their crypts, and must be put back in, and the proper honor must be given to them.  Tombs are continually defaced by loot-seekers and vandals, denying the dead their rest.  Restless ghosts must be appeased, and reconciled with their living families so they can rest. 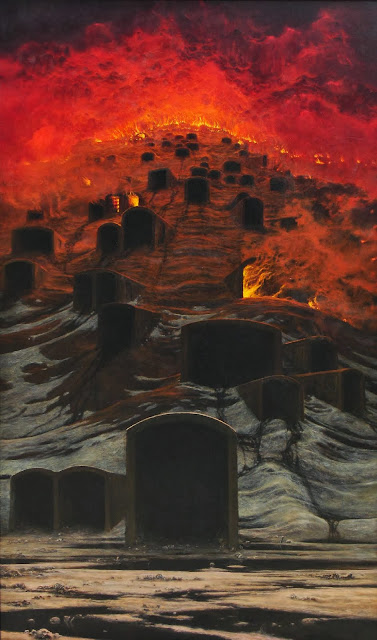 The City of Mondaloa is auspiciously placed: beneath it lies over a thousand miles of crypts--proof of centuries spent honoring the dead.  Mondaloa, the god, believes that since crypts will be our homes for eternity, they should be monuments of beauty and peace.  For this reason, the crypts resemble a palace, while the city above is as dirty and grey as any other city in the world.

These crypts are sacred, and only the most desperate of men (or the most experienced of thieves) traverse them.  The living have no place in the crypts, and where they trespass, the dead may rise and slay the intruder in righteous, just wrath.  And beneath the crypts of Mondaloa is another city--the fallen city of Kesh, conquered by the forces of Mondaloa half a millennia ago.  It was a great victory, until certain forces stirred in the conquered city.  These dark forces torment the sacred dead buried beneath Mondaloa, painfully rousing them from their sweet slumber.  And now hordes of anguished dead slouch up from the alabaster halls of the crypts.  They shamble up from subterranean galleries and through sweet-scented gardens of delicately carved stone flowers.  They crawl from the white halls into the grey, smokey streets of Mondaloa, where they seek to destroy the living in their blind rage.


After years of peace, the various knighthoods have had to reform and expand to deal with this threat.  There are many brotherhoods, and most are civic- and not martial-focused.  Paladins of the abacus.  But the martial orders concern us the most, for the purposes of this discussion.  Some seek to destroy witches.  Others demons.  Others heretics.  Others police the other knighthoods.  Others delve into the lost city of Kesh, seeking an end to this stirring that they may end what is anathema to Mondaloa.

When a ghoul rises howling in the street, the faithful fight together to destroy it.  Once destroyed, they hold hands around the corpse, and sing hymns.  A tear may roll down a cheek.  This was their ancestor.  What darkness could drive him against his own people?  After the corpse has been reconsecrated and bound in holy chains (stamped with the name of Mondaloa, so that he may sleep peacefully once again) it is brought back down into the catacombs, hopefully to the very tomb where it was first laid to rest (after it has been identified), and more prayers are said.

Larger attacks are rarer, but they can become much, much more gruesome.  Afterwards, these areas resemble a war zone.  But even after tragedies such as this, the proper respect is shown for the dead--both the ancient and those that are still warm.

Some knights descend into the crypts to fortify the dead with holy scripture, that they may not be disturbed again.  Most return.  Fools talk of moving the crypts.  But the wise know the truth: that the city of Mondaloa was built for the dead, not the living.  Those below ground outnumber the ones above it by twenty to one. 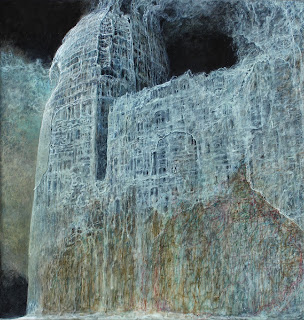 This post sucks but I'm not going to rewrite it.

Email ThisBlogThis!Share to TwitterShare to FacebookShare to Pinterest
Labels: duscuro