Born From a Museum Drawer 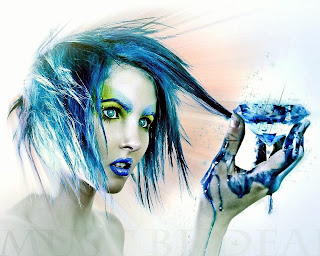 The sage Manchino jokingly describes them as, "a race without precedent." It's not a very funny joke, but then he usually talks about how the the wizard Seryl created the Serylite race, and that's a lot more interesting..

The Museum of Marvelous Things in Meltheria is a huge building that sits on the north end of Sesquipidalian Square.  It's not open to the public, but rather is used by the owners to showcase their collections to each other, and to discuss them in a prestigious forum. Its white granite walls display all sorts of wonders, but most of the collections aren't shown.  There simply isn't enough room.  Most of the museum's vast collections are simply shelved.

The patrons are both indiscriminate and rapacious in their collecting. Sometimes this leads to bad relations with the rest of the world.  (For example, the Fangolians from the City of the Dead who have been petitioning for years to have their ancestors returned. The museums response was, "Of course not--mummies are for studying." The museum maintained their stance even after one of their curators was kidnapped, killed, mummified, and shipped back to the museum.) But more often it simply leads to thousands of "possibly magical" items gathering dust in back rooms, most of which aren't described, and many that aren't even labeled. External historians and wizards are sometimes allowed to pick over the collections.

One such person who was allowed to pick over the collections was both a wizard and a historian.  Her name was Hespaji Seryl.

She was very interested in the scepter, because no other artifacts made of oraclite had been recovered from the Tromfers expedition, or indeed, anywhere near Djaffa. Although the rod bore many ideograms for "life" and "sorcery" among other symbols she couldn't interpret, the rod seemed to be non-magical by all classical assays. Idly, she channeled into it, attempting to activate it.

She examined many other artifacts that day, most of which were more interesting.  So it is no surprise that she didn't connect the "scepter, oraclite" with her pregnancy, when it was discovered. Nine months later, she gave birth to a grey-skinned baby girl, which did nothing to alleviate her confusion. 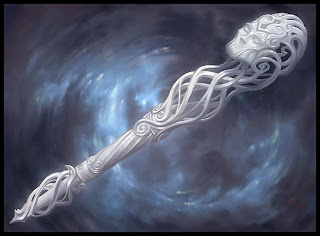 If she had never continued to investigate her daughter, the story would end here. Weird shit happens to wizards all the time, and no one seems to question it much. At least, not among the wizards.

Maybe it was the skepticism of other wizards.  Maybe it was the trust lost between her and her lover.  Maybe she just wanted to find out who the hell fucked her. But she ended up quitting her other pursuits and dedicated herself to solving this mystery.

One big clue was her daughter, Lhasadet.  The girl was seven years old, and Seryl had already determined that she had no spell-casting ability.  However, the girl had a strange affinity for magical items that perplexed her mother. Thinking about magical items and looking at the calendar of her pregnancy, she returned to the museum.

Suspecting the scepter and knowing the fastest way to validate her theory, Seryl impregnated herself a second time. Her second grey-skinned daughter was named Opaline.

It was about this time that people began calling her daughters "serylites". The museum and its collection holders objected, voicing the opinion that if these blue-grey girls were going to be called anything, they should at least be named after the man who financed the expedition that discovered the scepter.

However, when the records were examined, it was discovered that the scepter had not been discovered by the Tromfers expedition.  In fact, they couldn't find any record of any expedition finding it. The scepter had been mislabeled from the beginning.

The scepter was locked in the darkest corner of the basement, far from Seryl.  The subsequent investigations of the scepter were driven by politics and wizardly egos, and are much too boring to recount here. 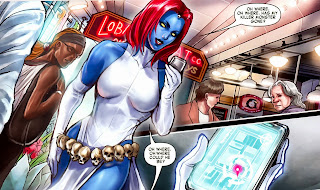 Seryl eventually went on a series of archaeological expeditions herself.  She took her daughters with her on these journeys, and the petite-but-very-well-outfitted family was well-liked in the areas around Djaffa and Tramaldea.

Her daughters Lhasadet and Opaline never learned a drop of magic, but they had an uncanny predilection for activating magical artifacts, which they operated adroitly. When their mother died, they were devastated.  They left Meltheria and their aloof stepfather behind, although they still sometimes visit their half-brother, an extremely cheerful sage and oracle who lives in Pandomon.

Lhasadet went on to join the Great Library of Asria, where she works closely with the Librarians Revenant.

Opaline went over the mountains to Yurmishi, where she has dedicated herself to helping the Molok (mushroom men) search for their wives.

Before her death, their mother succeeded, after much expense and years of labor, to recreate the scepter.  Seryl struggled with miniaturizing the proxy enchantments, and so the scepter is more of a staff.  It is over six feet long and made of aluminum and orichalcum.

The Staff of Seryl was passed on to Lhasadet, who keeps it in her bedroom, in an umbrella stand with her other staves. Occasionally she is approached by female wizards who wish to use the staff on themselves. Lhasadet always grants these requests.

The blue-skinned librarian has used the staff on herself.  Her first daughter's name is Fenei, and a second child is on the way.  Lhasadet is confident that it will be a girl. 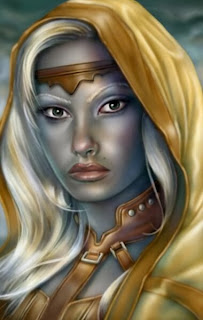 Serylites have blue-grey skin, white hair, and red eyes.  They resemble their mothers, but they mostly resemble each other. They can never learn to cast magic, but they are powerfully talented with magical items.

There aren't enough Serylites for there to be any stereotypes about them. Lots of people assume that they're man-haters (which might be a little true in Lhasadet's case). If Lhasadet and Opaline are any indication, serylites are sterile (unless the staff is used) although it's not like anyone has ever tested this or anything.  But the sisters are known to be inquisitive and tenacious.  They're also sympathetic to other's emotions while showing few themselves.

Wizards have noticed that when you attempt to read a serylite's mind, it is returned blank.  And when you polymorph into one, it's like polymorphing into a rock--there's nothing there. That is to say, the experience of being a serylite is the same as the experience of nothing.  It's not like anything to be a serylite.

This has led to the speculation that serylites are not one of the races of man, but actually an ingenious type of golem. The fact that they are sterile only lends credence to this theory, since everyone from orcs to elves to halflings can produce children with each other.

It known that the present span of history begins with the ending of another. That's why all calendars begin with the Time of Fire and Madness. It's a calendar that no language, culture, or city predates.

So if the pre-apocalyptic world wanted to engineer a race that could survive an apocalypse, the serylites would be an adequate solution.

The same theory claims that druhoks were created with the same agenda.

This is probably the most popular of the three theories.  Funny how they assume it's a utopia.  I can totally imagine unpleasant alternatives.
Posted by Arnold K at 1:55 AM