Not a Hero, Not a Villain, Not a King

Zath ko Macchen was once a warrior.  He did many great deeds, but he was was not a hero, a saint, a king, nor a villain.  Although he saved the city of Merenmeck from the slime he also absconded with their treasury and six of their fairest daughters.  He freed the Recursive Fox when it was caught in the limbs of the Ferrule Forest, but he also cut off its tail and wore it on his belt.  And when Vokrin Tsang, the Tornado Tyrant, began his windy reign of impalement, Ko Macchen was there to end him.  And although he did all these great things and more, no one liked him because he was a braggart and an ass, and the mechanical elephant he rode around on was tacky as hell.

When ko Macchen died killing the second-to-last vampire, no one mourned him.  A great deal of fighting took place over his loot, with the city of Shar getting the lion's share.  The giant clockwork elephant containing his wives and 99 children rode off into the northern wastelands and was never seen again.

The cities didn't want the body of such a powerful individual in their graveyards (since even adventurers' corpses are dangerous things), and yet their sensed that it would be dangerously disrespectful to leave his body in the wilderness to be devoured.  (Technically, his body was lying in a slab within Macchentown, but the city he founded fell apart upon his death and was largely torn to shreds by looters looking for valuables.)  A solution needed to be found. 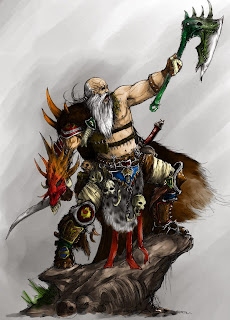 A Royal Tomb in the Pauper's Field

After a lengthy bidding war and one failed attempt to send his body into space, a compromise was reached.  The money was pooled, and out in the salty plains south of the Londeen Swamp, a small tomb was carved out of the limestone, and ko Macchen was buried hastily and reverently, amid the tears of hundreds of hired mourners.

These were during the days of Roa Junyo, when the great tree Aglabendis sent his roots across hundreds of miles and into the cities, tearing down walls and releasing stinging insects that carried the hopping plague.  Since druids were recognized as enemies of everyone who wore shoes and ate bread, it is little wonder that no one asked the druids of the region before deciding to bury ko Macchen there.  If they had, they would have learned of their folly.

The wizards call them poltergeist elementals.  The scholars, who recognize that wizards are a superstitious and ignorant lot (at least in certain respects), refer to them collectively as effronteria.  And the druids call them etherwasps.  The creatures build nests deep in the earth, along sulfur deposites and inaccessible speleothems.  They are incorporeal once mature, whereupon their adopt an extremely unconventional metabolism.  They're also known for the inexplicable way in which they parrot the words, personalities, and memories of those that they come into contact with.

Anyway, the ground that Zath ko Macchen was buried in was the territory of a great hive of poltergeist elementals.  The first thing that they did was crack open the tomb and throw ko Macchen's gold-laden body into the Saltsea, over four miles away.

Ko Macchen's body was found by Jerrindale the Sage, who spends four days out of every five floating in the middle of the Saltsea without any raft, fresh water, or clothing.  The sage traded ko Macchen's magnificent armor for a melchior of wine, buried the dead warrior in the sand of the beach, and spent the next two weeks beneath a salt-palm, chuckling in a drunken stupor.

After ejecting the offending corpse, the poltergeist elementals decided to take their great hive skyward.

Even the scholars are at loss to explain this behavior.  Certainly no effronterium, nor colony, has every done anything remotely similar in the years since they lifted their limestone hive.  The only conclusion is that something about ko Macchen must have caused the effronteria to organize and behave in this bizarre method. 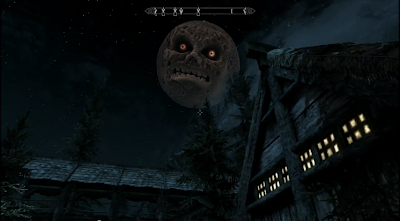 For a few days, the ten-million pound mass of stone hung in the air, insulting all of the physical laws and natural inclination of stone.  It contained ko Macchen's now-empty tomb and several small cave systems.  After a day of confusion, the displaced bats learned the new location of their old home, and nested there each night after a full evening of mosquito hunting.  No trees or other structures were brought--it was just a mass of featureless stone.

Then, the poltergeist elementals began to carve away the peaks and tors.  They didn't work during the day, and during the nights the forest below was filled with sound of boulders falling from several hundred feet up.  At first, the observers thought that the poltergeists were merely shaping it into a sphere.  Later, it became apparent that they were carving it into an exact replica of the moon.

Five weeks later, the miniature moon flew away, taking its caves, bats, poltergeist nests, and at least one giant cave sloth that sometimes crawled out of a mock crater in order to regard the surroundings disapprovingly.

Since then, the Poltergeist Moon has flown all over the world, chasing the shifting currents of planet's magnetic field.  Scholars can find patterns in the Poltergeist moon that relate to coronal ejections of the sun and the rhythms of the aurora australis.

Wizards sometimes summon the Poltergeist Moon, and bribe it into service with offerings of thunderstorms, massive magnetic oscillators, or powdered alum.  Collectively, the poltergeists of that flying rock are about as intelligent as a person, and certainly capable of understanding speech and behavior.  They can be dealt with, although they are capricious and dishonest.

It also behaves as a normal poltergeist does, which can be boiled down to two behaviors: defending its territory and playing pranks.  In one case of territory-defending, the moon submerged itself in the crater lagoon in Tremadiye Island and killed all the islanders that didn't flee.  It even killed the crew of a ship that landed to investigate the ghost town.  A few weeks later, it rose out of the lagoon and flew away.

When performing pranks, it mostly focuses on things that will scare, embarrass, or bruise.  Schadenfreude amuses the poltergeist moon (perhaps something about the intersection of two German words).  After a prank, it usually moves on amid a chorus of chuckles, but if a poltergeist elemental is killed, the whole hive flies into a rage, and it will attack like a nest of murderous, incorporeal bees.

Its most disturbing behavior is its tendency to pick a person (or group of people) and follow them around.  Interesting people, or people with a lot of metal, are the ones most likely to be subject to this unwanted attention.  Since the Poltergeist Moon resembles the actual moon, it's usually not obvious.  How good is your depth perception anyway?  Can you tell if the moon is 200' away or 200,000 miles?  Have you memorized all of the craters on the moon?  Did I really just see that flock of bats fly into the moon?  Is that a giant cave sloth?

If you really piss off the hive (probably by killing a lot of poltergeists or pelting it with magnetism), the whole moon will turn around, revealing the dark side of the Poltergeist Moon.  Which a giant face.  Then it flies downward and slams into the ground, crushing everything.  The stone mouth of the moon might even chew a couple of times if it needs to destroy a particularly resilient building.  Then, if its target has managed to run away, the moon will pursue them by rolling. 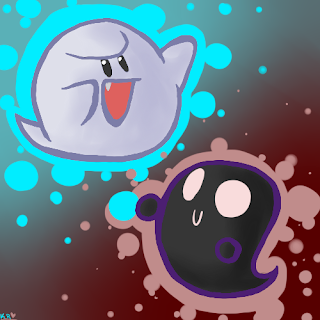 Incorporeal: Poltergeist Elementals are normally, invisible, silent, and intangible, but they can still manipulate the material world.  They are unaffected by any mundane creature, material, or weapon.  They are also immune to damaging spells, except for magic missile (which affects them normally) and electrical damage (see magnetic metabolism, below).

Manipulate: Despite being incorporeal, poltergeist elementals can still swing a sword, slam doors, push someone off a ledge, or punch people in the face.  Think of them as a one-armed, 0-level peasant with 12 strength, a thick mitten, and a bad attitude.

Magnetic Metabolism: They are also immune to magical damage, except electrical damage.  If an attack does 6 or less damage, the experience is pleasant and nourishing to the poltergeist elemental, and it takes no damage, and instead heals for half the amount.  If an electrical attack does 7 or more damage, they are damaged normally.  Magnetic fields shove them around like a goldfish caught in a toilet.  They hate this experience and will flee from it (if they aren't trapped by it).  The experience of being shoved by magnetism is so unpleasant, in fact, that they will even vocalize, which sounds like a cross between a rat screaming in pain and a Doppler radar screech (which lets you pinpoint their location).  They don't screech under any other circumstance.

Malicious Manifestations: They are also capable of manifesting simple images and sounds, much like a parrot.  They usually use this to make faces appear on surfaces or to make surprising noises.  They are intelligent enough to use this ability appropriately, but cannot form their own words or phrases.  They can only repeat things that they've heard, and only poorly.  Their words sound muffled and stilted--again like a parrot.

Juvenile poltergeist elementals resemble fat, flying balloon-grubs with metallic skin and a pair of small needles instead of a face.  They are non-aggressive unless they smell the coppery blood of another juvenile (such as if another one is wounded), in which case they will swarm and attack.  Just treat them like rats that fly and move at half speed.  They also make a supersonic chittering that is outside of the normal hearing range for humans.  Elves, however, are deafened by it, and bleed from their gums.

This isn't meant to be a fuck-you-you-thought-it-was-a-ghost type of monster.  Clerics with any level of formal training know that Turn Undead and other undead-specific spells don't work on poltergeists (although most think that poltergeist elementals are some exceptional form of spirit).  They've probably heard that electrical damage hurts them, though, and they are more likely to know this than wizards.


A Note on Wizards

Wizards are not scholars.  Wizards are very ignorant, in their own way.  They spend time studying dead languages, hunting rare animals in order to eat their mystical organs, and speaking to inanimate objects (who don't speak back as often as the wizards like to pretend).  Wizards are among the most superstitious people on the planet, always waving their hands and invoking gods.  Although they've heard of many things and can assign a name to the weird creature that just crawled out of the sewer, they're also very likely to have dangerous misconceptions about it.  For example, wizards believe that there are four elements (fire, water, air, and earth) and universally reject the notion that chlorine or oxygen are elements.  Moreover, wizards have an unflagging believe in parallels: if there is a water elemental, then by the gods there must also be a fire, earth, and air elemental.  And if they find two things that look like air elementals, well, one of them must be a. . .a. . . poltergeist elemental! Yes, definitely a poltergeist elemental.  Since poltergeiss is a sub-element of air.