This is a direct continuation of a previous post about orcish prayers.

This post has been translated into Portuguese by Eric Ellison here. 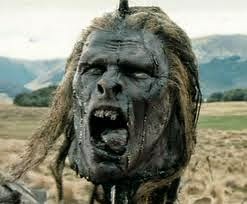 Haruspex (n) - a diviner who bases their predictions on the inspection of spilled entrails.

Orcs believe that the gods hate the world, and they hate orcs most of all.  So it is no wonder that the gods speak through violence.

The gods speak through pain, in different body parts.  A shooting pain in the leg is an omen for cowardice.  A dull ache between the shoulderblades foretells the betrayal of a close friend.

The gods speak through blood.  After a battle, you can see the orcish haruspices moving through the battlefield, reading the future in spilled claret.  They crawl through the grass on all fours, like dogs, their faces pressed to the ground, nostrils flaring.

The gods speak through scars.  Examine the edges of the scar.  Are they clean?  Are they mottled?  Is the scar raised?  Discolored?  Does it follow the curve of the body, or does the flesh struggle against it?  Orcs do not trust a person without visible scars, just as humans might not trust someone who refuses to reveal their name.

Orcish haruspices are not clerics or priests.  They do not worship, nor do they preside over the appeasement ceremonies (designed to keep the gods from sundering the earth).  Rather, a haruspex is an orc that hates themselves so much--such divine levels of self-loathing--that they have completely severed themselves from the universe.  (Human saints pray for unity with the cosmos, orcish haruspices hate themselves into living oblivion.)

And since they are no longer part of the universe, the gods do not see the haruspex anymore.

When a haruspex dies, they cease to exist.  Their eternal reward is nothing.  Utter oblivion.  They are pleased with this.

Everyone else goes to hell when they die.  Heaven is a lie humans tell themselves because they are weak and servile.

Haruspices are covered with wounds that never heal.  You can tell how powerful an orcish haruspex is by how injured they appear to be.  Some even appear to be undead, since they are so emaciated and disfigured.  During their trances, the wounds grin like mouths and speak prophecies.  From the torn lips slip mutterings, madness, and prophecy--the sleep talk of the gods.

Since suffering and violence are the only things that appease the gods, orcs believe that it is only the violence of the world that keeps the gods from destroying it.  The day that the gods stop laughing at our misfortune is the day that they purge the land with fire.  Through war and cruelty, orcs are saving the world.

They are not sad about this fact, just as the shepherd is not saddened that he must thin his flock to feed himself.  Except that the orcs see themselves as both shepherd and sheep.
(Even the 'good' gods of the humans desire our suffering.  Why else would they saddle their believers with fasts and cruel injunctions against their own nature?  Why do they prohibit wine, sex, and crude songs?)

However, orcs must keep it confined to the interiors of their houses, where the gods cannot see.  The gods reside in heaven, and so anything performed within view of the sky will be judged.  And since the gods can hear all things, love must never be spoken aloud.

Orcs believe that every time a husband and wife kiss within view of heaven, somewhere a child is stricken with a killing disease.  Every time a warchief publicly shows mercy, an innocent is torn apart by wolves.

Most humans erroneously conclude that orcs are without compassion and gentleness.  They believe that believe that orcs do not even have a word for 'love'.  This is half-true.  While a word for 'love' exists, it is both blasphemous and rarely used.  Orcs couch their affection for each other in dysphemisms.  Only the bravest orcish lovers will whisper promises of affection into each other's ears when they are alone in their tent (and during high noon, when the gods are most likely to be sleeping).

Some gods can be bargained with.  They might trade some venal miracle in exchange for a small mountain of skulls.

"If my clan survives this battle," the warchief says, "I will sacrifice ten of their number atop the Red Tree.  Grant me this covenant, O Lord of Teeth, O Cracker of Bones, and I will fulfill my vow."

It's important to note that orcs trade the debt, not the kill.  They have a negative currency.

Most clans are small, and so the orcs have an easy time remembering who owes how many skulls.  (See also: rai stones).  Clans even trade these among themselves.  Humans trade a valuable thing for a valuable thing.  Orcs only give, or they only take.

They might give a fertile valley and 300 dead children.  A cache of steel weapons and 200 dead elves who must all be killed via beheading.  A herd of cattle and 32 orcish suicides through disembowelment.  A tally is kept, both among the clansmen and in heaven, where the gods look down and laugh.

Orcish bankers store these blood debts.  Except the orcs don't call them bankers.  The actual word translates to 'skullcrusher', because the debts are usually paid in fresh skulls, which are then crushed underfoot.  The only currency among the orcs is death.

Here are some examples of orcish prayers.
Posted by Arnold K at 10:16 PM