A Tower in the Wasteland

I've decided to just write a dungeon without spending too much time overthinking it.  Stream of consciousness, etc.

Bent-backed and smooth-sided, this metal tower lurches out of the ice fields of Langa like crooked finger.  It has no door.
The tower is scratched with graffiti.  Up to 10' off the ground, you'll find human graffiti ("In Moonlay valley, follow the ice tornado in May" or "Biggest cock") while giantish scrawls climb as high as 30' off the ground.
To enter the tower, however, you'll have to climb in the open top, 50' off the ground.  There are no handholds on the smooth metal, and 50' is higher than anyone can throw a grappling hook.  Scraps of wood on the ground give clues to previous explorer's methods of entry. 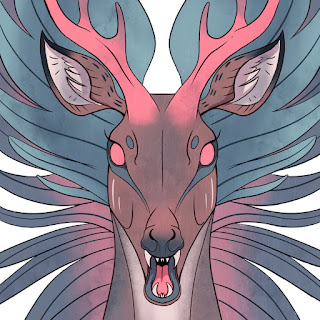 The interior of the tower is a sheer drop down, nearly vertical.  The floor is 80 below, although a climber, perched on the lip, will not realize that.
The shaft is also home to a peryton.  A climber perched on the lip, will absolutely realize that "something" is below them, since the peryton will begin hissing, screeching, and blaspheming in dead languages as soon as someone reaches the lip of the tower.  The peryton is 40' down, and will attack as soon it is disturbed (such as someone dropping a torch on it).
Peryton
Lvl 6  Def chain  Atk 1d12
Fly fast  Int 4  Dis guardian
Mirror Image - 1/hour, create an additional 1d4+1 illusory perytons, usually immediately prior to snatching someone up and flying away with them.  Only the real peryton has a human shadow.  (If a peryton is attacking you, you rarely have the time or the vantage point to observe their shadow.)
Common knowledge: all the usual peryton stuff + perytons are valuable to certain people, since their shadows will lead you to land of the dead, once the peryton is killed.
Perytons will attempt to carry people up high, then drop them to their deaths.  This peryton is defending it's young.
The peryton cannot fly inside the tower, but it is large enough that it can climb by pressing its wings against opposing walls.

The nest is made from a rowboat that has been jammed halfway down the shaft.
Three newly hatched perytons (look identical to humans, except for their avian eyes) coated in blood in crust.  They make disturbing noises, but are ultimately harmless.
2 grappling hooks and 100' of rotten rope.
A bearskin bag filled with bear lard.  Hidden at the bottom, a golden torc worth 300s.  This counts as a Treasure and marks the wearers as a Priest-Who-Survived-Death among the Chain Cults of the Revanwall Cities.
A masterwork bow.
Mastodon bones.

The corpse of an archer, killed by a fall.  20 arrows.
The corpse of a thief, ribcage broken open.  A lockpick and a telescope.
This room is a dead end, except for a heavy steel hatch.  A total of 20 strength is required to open it (a crowbar doubles your effective strength).  The hatch is impossible to open quietly.  Once open, a sickly green light floods the room.

The Levers - welded into place and impossible to budge.  They once operated the breach and fired the cannon.
The Canisters - A dozen canisters, half of which are now leaking a rotten green-black-yellow sludge.  This is what is shedding the light throughout the room.  When sentient creatures enter the room, the sludge begins to moan and move towards them.
The sludge is actually abichor, a weapon created during the Age of Horrors.  (All adventurers have heard of abichor, but the PCs will not know what it looks like, or that this sludge is abichor.)
It is a spiritual toxin, but not a physical one.  Exposure to it causes (in order) the loss of magic, the loss of the ability to enter heaven, the corruption of the soul, and death.  Another century of exposure beyond this, and you will become invisible to gods.
Common knowledge: abichor is driven back by love.  Actual fact: abichor is driven back by anyone speaking passionately about a topic that they care deeply about.
Alternatively, you can burn the abichor back, but the smoke carries the same effects as the sludge.  Abichor also counts as undead, given the nature of its production.
The Doors - Two doors lead out of this room

Tomasin, the abichor ghoul - He will speak to you through the door, begging you to let him out.  If engaged, he will tell you that he was cursed by the abichor in the room (probably informing the PCs of the sludge's identity) and is desperate for release.  If released, he will attempt to consume everyone.
Abichor Ghoul
Lvl 4  Def chain  Bite d6 / d6
Fly balloon  Int 10  Dis evil
Growth - If an abichor ghoul deals enough damage to bring someone to 0 HP, it devours them.  Each time it devours a person, it gains a level and heals for 1d6 HP.  The first time it gains a level, it also gains a third attack.
An abichor ghoul looks like a bloated, flying corpse, swollen with corpse gases.  It's real mouth is its navel (which it only opens to attack) and its teeth are its bones, re-assembled crudely.
In the back of the room is a suit of armor (contaminated with abichor) and a stoppered bottle where Tomasin vomited his soul years ago.  If the bottle is opened, you can talk to the real Tomasin for a few minutes.  Tomasin will spend 1 minute apologizing, another 1 minute babbling about his mother, and finally 1 minute answering your questions.  (Tomasin has seen all of the rooms of this dungeon, except for the Lens.)  Once the bottle is unstoppered, Tomasin's soul will depart in 3 minutes, even if the bottle is re-stoppered.

Written on the door is the letter T, in chalk.  Once this door is open, you can hear the scraping of the Killing Machine, from far away.
Behind the door is a short hallway, about 10' long and 5' wide.  On the far side of the hallway, perfectly bisected, are human remains.  They are brown and crumbling, and the smell of rot is faint.
The hallway is trapped.  Anytime an object crosses the halfway point of the hallway (5' away), the entire hallway is bisected by an invisible force that runs down the middle of the hallway.  Anyone edging along the walls is unhurt.  Anyone walking confidently down the middle is cut in half, no save.
This hallway leads to another door that opens onto the bridge.

Email ThisBlogThis!Share to TwitterShare to FacebookShare to Pinterest
Labels: dungeon

A bilocational city, existing on both the moon and Langa (in Centerra) at the same time.  It has jurisdiction over the Cat's Bowl and Jian Ven Dha.

The rulers of right-handed Ba Dwai La, their authority is established by the ruling family, which is destined to birth the God-Child several generations hence.  Their breeding program is enforced by Intercessors.  As a result, the ruling family gets smaller every year.  Eventually, it will just be the Father, the Mother, and their Nurses.

Members of Oona Druha use their small gods to learn when they have met their soul mate.

A race of aliens who conquered the planet long ago, and stripped anything of value from it.  They dwell in mirrors and resemble pelagic nudibranchs.

Despite the name, they are from a place much farther away than the moon.

The rulers of left-handed Ba Dwai La, their authority is established by their displays of strength, scholarship, and the celebration of the self.  They oppose Oona Druha, and confer with the the glorgs.

Members of Zala Korvina use their small gods to learn what is holding them back.

A trio of massive slugs that lives beneath Ba Dwai La, eating garbage.  They are advisors to Zala Korvina, but many whisper that the Glorgs are servants of the Oona Druha, and that their rebellion is merely a sham.  Regardless, their gifts of strength and knowledge are genuine.

The small god is actually an eye on the back of the hand.

The grove of sacred jendai trees grows here.  With careful pruning, they can become spaceships.  The trees are considered to be first-class citizens (everyone else is second-class).  Only the grove can sell a jendai tree, but since this is considered to be a form of slavery, the trees rarely deign to sell one of their own, and the ones that are sold are always the most wicked trees in their (admittedly small) society.

The harmonium is also home to the last breeding population of true humans; over two dozen enjoy captivity here.

The mismera that surrounds the Cat's Bowl, but also the rivers that flow beneath it.  Movement is impossible above ground (as it is haunted by achelornises and other dread fowl) but navigation is impossible below ground (as there are no landmarks, and the currents shift constantly).

A crater lake on the far side of the moon, it is used to catch incoming spaceships, refuel them, and then launch them.

The Cat's Bowl is also an adjacent town of the same name.

The tower that serves the Cat's Bowl.  All of the greatest sorcerers in the world are brought here, but especially clairvoyants, telekineticists, teleportationists, and calculators.  Their immense talents are leveraged to communicate with their counterparts on distant stars, detect incoming ships, use teleportation and telekinetics to adjust their location and velocity, and then bring them down for a landing in the Cat's Bowl.

Lunar people will tell you that this is the entire purpose of the moon, Centerra, and the rest of the planet.  If the Cat's Bowl ever failed to perform this reasonable duty, they would be burned off the surface of the moon, and a successor race would be installed that was capable of it.

The process of joining the generations is a honorable tradition, but is never approached without some reluctance by the sorcerers of the tower.  They know exactly what the generations are--a beast without borders, words, or intentions.

The vudra are refugees from this place.