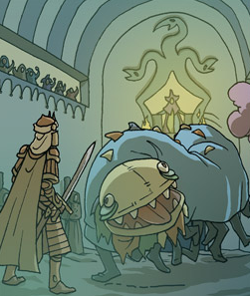 If you cut a wizard's skull open, all you'll find is a labyrinth of scar tissue and jellied arroyos.  The arm of a junkie is spotted with old infection scars and needle tracks.  The brain of a wizard is abused in the same way, and indeed--spellcasting is impossible without the death and instant regeneration of long tracts of neurons and glia.

Wizard brains are subject to strange alchemies: some sundry, and some surreal.  They are victims of strange infections and incomplete possessions, some of which go unnoticed for years before their symptoms spring to the surface.  Like syphilis, these diseases of the mind are the result of unprotected contact with alien intelligences.

But these things are beyond the scope of this essay.

We will turn our attention, then, to the subject of madness, as it pertains to the wizard.

L'essanque's Madness (pronounced less-SONK) is perhaps the best characterized of all the eldritch insanities, and with some of the most "ordinary" symptoms.

0. Delusions.  This madness is characterized by the belief that there are small creatures under one's skin that eat it, or at least cause diseases.  The wizard may believe that these creatures are the result of some some experimentation of their own, but more commonly, they believe that others carried the parasites with the intent to spread infection.  Beyond this delusion, which invariably spirals into unique complexities, the wizards always retain their rationality, mental resources, and will to survive.  Other truths are invented in order to maintain their central fiction--subcutaneous parasites.

1. Hands.  In the earliest stages of the disease, the only symptom may be hand tremors.  Soon, the hands will reflexively close on objects that are placed into them.  In terminal or protracted cases, the wizard may even be unable to let go of the held item.

2. Mouth.  A strange sensitivity arises in the lips.  Wizards may unconsciously touch items to their lips in order to ascertain their textures, but this is an unreliable diagnostic.  In time, the lips grow to be bright red and gelatinous.  It is not known if this transformation would involve if it were allowed to continue, or even it if would affect the rest of the body, because the affected wizards invariably eat their own lips at this stage.  If knives or razors are at hand, they will cut the skin off their face off, from chin to nose, while citing itching as a complaint, and eat it, as well.

3. Agoraphobia. This one is well documented in even traditional handbooks of psychology.  A wizard affected by La Folie de L'essanque will take this to extremes, however, and may even resort to crouching under tables, wedging themselves into crawlspaces, and in terminal cases, creeping through the narrow spaces between walls.

4. Lights.  After a wizard affected by L'essanque's Madness has eaten their own eyes (as they invariably do) they gain a strange ability to influence lights near them.  It was originally thought that they could see out of lights, but this has been proven false.  The current hypothesis is that they are able to determine the outlines of nearby shadows, even if the shadows are behind a wall or otherwise hidden from view.

5. The "Rats".  They do not exist.  They are merely a manifestation of the wizard's madness.  They take the shape of small, humped, scuttling things with a heads in variable states of decay.  They appears as the shadows of "rats", and they attack and devour the shadows of other living creatures.  They draw no blood, but they will take bites out of your shadow, destroying your ability to see light and appreciate beauty.  Blindness, depression, and death, in that order.  The only known method to restore one's shadow (which may now be missing noticeable chunks of flesh) is the eating of raw bird-flesh.

6. Teeth.  Not the wizard's teeth.  HIS teeth grow hard and calloused.  Like lacquered stones.  YOUR teeth, if you are near him, will fall out.  They will fall out at an alarming rate, proportional to the depth of his madness.  A new sufferer might cause one of your teeth to feel loose in its socket.  A wizard plunging the abysms of madness might cause your teeth to slide painlessly from their socket at truly horrific rates.

You must guard your teeth.  Lost teeth grow to become creatures.  The best way to prevent this is to submerge each tooth in formaldehyde and keep it on your person, but other, less drastic methods work as well.

7. L'essanque's Creatures.  They resemble children (or fetuses) with malformed limbs, each with clawed hands and toothless mouths (the original tooth resides in their left eye socket, where it presses against the eyeball visibly).  They sob uncontrollably and crawl feebly towards living creatures.  When they reach their prey, they creature a puncture wound with their stiletto-like thumbs and suckle at the stream of blood that emerges.  Though they might grow engorged, their hunger never slackens.

Under no circumstances should you kill one.  It will regrow itself among your entrails.

8. Death.  In many cases, no intervention is needed, as the disease is invariably fatal.  Most recommended treatments involve sealing the affected wizard in his house.  Death comes from autocannibalism, dehydration, or suffocation (if the wizard has stuffed himself/herself into one of the walls).  The time until death is variable, however, since wizards have strange ways to prolong their lives.  Sealed domiciles should only be entered with caution.

9. Contagion.  Most wizard madnesses are contagious, and L'essanque's is no exception.  Casting spells near an infected wizard is the most known way to contract the madness, but touching the corpse can cause infection as well.  As the dead wizard's teeth are the most infectious parts of the corpse, they are sometimes ground up and used to "poison" other wizards.  Luckily, non-spellcaster's only have to worry about contracting the mundane form of the madness (that is--the delusion that parasites are living beneath your skin).