Here are some of the animals that live in the Brimstone Waste:

Brown ones, white ones.  Most are small (2-4") and roam in vast packs (1000+ individuals).  These are harmless.  Giant spider crabs hunt through the mudflats, too.  For them, use stats for giant crabs, except that these guys raise themselves up on their stilt legs during combat, and can only be hit by reach weapons, at least until 1d4+1 of their 1HD legs have been smashed and they topple over.

You'll see herds of these guys, too, crawling across the landscape while gasping for air.  The big ones are the size of ponies.  They get pretty aggressive in the water, but will usually flee when you encounter them on land.  Their gawping grin can swallow a halfling whole.  They'll happily try to swallow larger prey, but will frequently choke to death on man-sized prey. 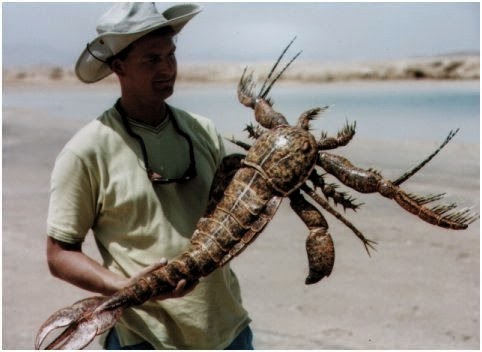 Taller than an orc, these huge birds are predators of the first class.  Poncy frothstalkers camouflage their bodies with mud and/or foam, and kill their prey by disemboweling them.  Scintillant druni-birds kill their prey with axe-heavy pecks, and display their steely feathers in elaborate mating displays that can last for days.  They have 3 HD, travel in packs of 2d6, and are basically just raptors that make turkey noises.

They are prized as pets, although they can never be fully tamed.

These are degenerate cousins of dragons.  Compared to true dragons, they are stupid, lazy, and cruel.  They lurk in shallow dust-pits and hunt like crocodiles, and their death rolls are strong enough to tear a man in half.  They have wicked brown teeth, and on quiet nights you can hear them clashing their armored coils together.  They breath a cloud of toxic smoke and hot grit that deals 5d6 (save for half) and blinds the target for 1d6+1 rounds (separate save to negate).  7 HD and armor as plate.

These are diamond-shaped parasitic beetles, each about three feet long.  They have a single red eye in the middle of their backs.  They attach themselves to the sides of dust wyrms, where they live their entire lives, drinking blood from the huge reptile.  Their names always include the name of the wyrm they are attached to, as well as their location on that wyrm (e.g. 'Locuhr's Elbow').  They are psychic, telepathic, and communicate with distant friends via the dreamscape.  They use their influence to subtly influence the behavior of their host wyrm, and if a wyrm is heavily parasitized (20+ parasites) they have nearly fully control, and are able to calm a hungry wyrm, or direct it to attack distant enemies.

Wise parasites are revered as oracles, and people journey for hundreds of miles to speak to them.  Some of their members are revered as oracles (such as the famous Diagun's Tail). In exchange, they sometimes want news, favors, or entertainment.  But sometimes, they want nothing in exchange for their information, unlike human oracles.  (Of course, getting through the Waste and the Wyrms is often challenge enough.)

Sort of a primitive type of ooze, algae mats cover large areas, sometimes up to a quarter mile.  They can be crossed, but only by running across them.  Run any slower and you'll be pulled in and digested.  Horses are also quickly eaten.

Brutal and militant, like all orcs, the brimstone orcs are famous for painting themselves white.  Then they launch assaults amid dozens of thrown smoke bombs, which vent more white smoke that gives them cover.  They also smoke poisonous cigars (which they are resistant to), and blow the toxic smoke in their opponent's eyes when in combat.

They inhabit huge towers of land-coral.  They repel invaders with fusillades of darts, and are a valuable source of protein in the Brimstone waste.  Eating large amounts of termites causes crystallization of the eyeballs.
Posted by Arnold K at 11:47 AM