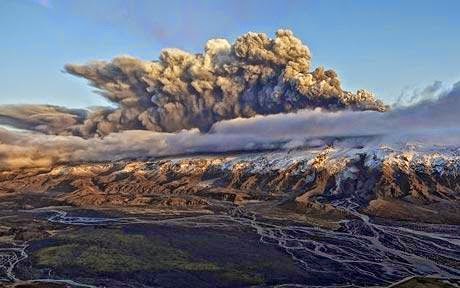 In Hesaya cosmology, the Brimstone Waste is believed to be the literal entrance to hell.  The souls of the wicked are carried there by birds, and are then deposited in the Great Caldera, where they pass on into the afterlife.  (Compare this to the souls of the virtuous, who are carried out to sea along Greywing Bay.)

There are two commonly known facts that inform all aspects of the Waste.  First are the clouds, smokes, and fogs.  Visibility is highly variable, and while some days might bring blue skies (that allow you to see the pillars of smoke and steam emerging across the landscape), on other days the air is filled with ashen smoke, boiling steam, sulfur clouds, or poisonous gases.

Secondly, the food chain begins with bacteria, rather than plants.  Most of the Brimestone Waste is too dark, too hot, too saline, or too sulfurous for plants to thrive there.  And while the Waste is incredibly varied on a bacterial level, the average traveler will only notice the grey flakes atop another rippling mile of volcanic morphologies, or the yellow crust that dapples the side of tufa pillars.  It's not a desert, but it looks like one. 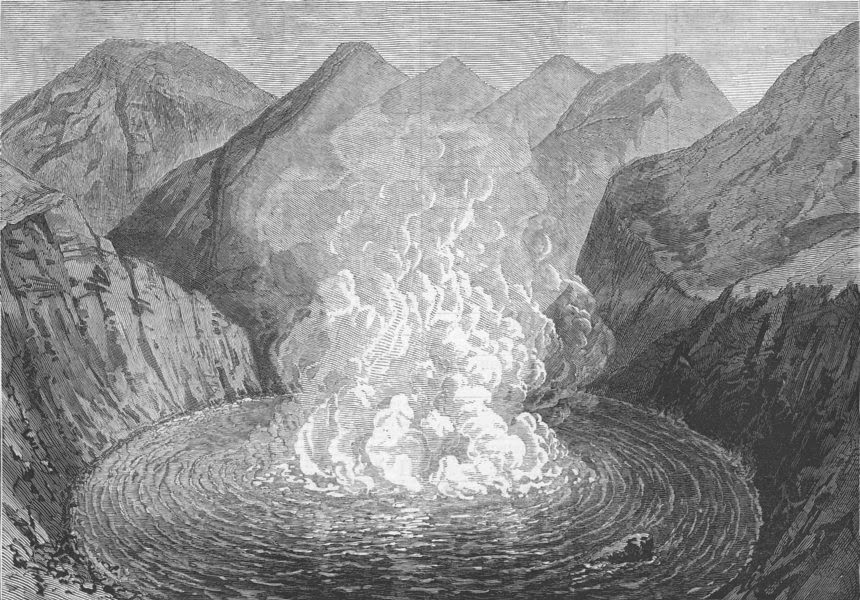 The Great Caldera is a boiling lake.  Well, that's not true.  While it certainly has boiled in the past, it usually remains several degrees below.  The water is sulfurous and pungent, and while it can be safely consumed, it tastes foul.  Additionally, the water is believed to be corrupting (since it boils up from the pits of hell) and is sometimes exported for use as unholy water around the world.  In the center of the lake is an island, which contains the Sealed Temple.

The Sealed Temple is believed to hold back the literal forces of hell.  The temple itself is not large, and resembles a five-sided mausoleum, built from black marble, knotted and tense beneath the sloping shoulders of its pillared sides.  Every year, the First Servant of the Authority ventures inside the Sealed Temple, reconsecrates it, and re-applies the white lead that holds the Great Seal in place.  According to doctrine, the End of Days will begin with the opening of the Great Seal.  The First Servant of the Authority has the crucial task of postponing the Apocalypse. 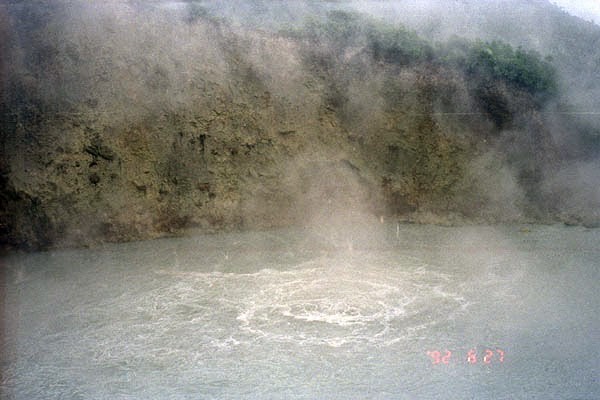 The Sarcophagus of the Great Seal is a metal dome that has been built around the Sealed Temple.  It also includes the docks (full of steel-hulled boats), chapel, and knight's quarters.  Traditionally, the Sarcophagus was home to a very small order of paladins, called the Leaden Order, but it is now believed that the Church has begun using golems to guard the Great Seal, and has begun relying less and less on the paladins.

The Hell Road was once a sort of aquaduct that traversed the Brimstone Waste.  Back when the church had more financial solvency, it was able to keep the road in good repair, and it was a simple affair to travel to the Sealed Temple, simply by walking above the floods of poisonous foam and yellow banks of sulfur clouds.  But now, orcish vandals have knocked down large sections of it, insane pilgrims have occupied other parts, and carnivorous birds have colonized other parts of this ruddy, stone road. 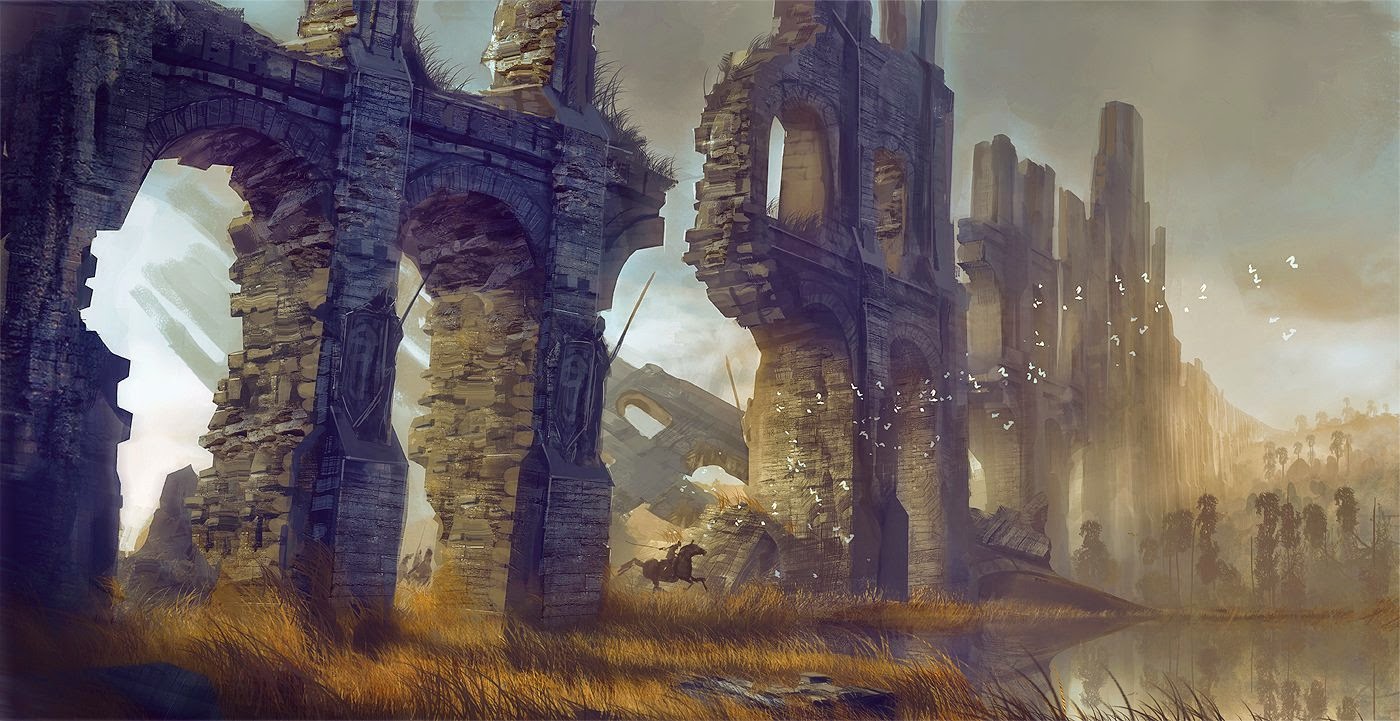 Pilgrim Enclaves are also common in the Brimstone Waste.  For whatever reason, visiting the actual door to hell is an attractive proposition for all sorts of crazies, and numerous communities of the mentally ill dot the hellish landscape, ekeing out of a living by trawling for foamfish, and by licking the nutritious slime off of rocks.  Enclaves tend to be full of millennial doomsday cults, would-be messiahs, or would-be antichrists.

Brimestone Orcs are also common.  Their strong constitutions protect them from the worst of the heats and acids and blow through the Waste, and their short lifespan insulates them from the degenerate respiratory diseases that long-term inhabitants of the waste normally develop.  Like all orcs, they are brutal and disrespectful.  They sometimes fill hotsprings with blood, and then bathe in the boiling result before battle.  They're also the only orc clans to practice execution by geyser.

Titan's Field is the largest settlement of Brimstone Orcs in the region.  A long time ago, a bunch of titan skeletons (a hypothetical type of largest giant) were found buried.  It was assumed to be a burial site, but before it could be fully explored, it was captured by the orcs.  Since then, the orcs have turned it into a strip mine (where they mine for burial goods) and a city.  The titan skeletons are either discarded or used as decorations.  For example, a titan skull makes for a very intimidating doorway.  Supported by ancient titan wealth, the city continues to thrive, even though the central pit of the strip mine-city is a small lake of poisonous, metallic sludge.

Mesas are the only places that are truly safe from the poisonous billows of the low lands.  The tops of the mesas are lush, isolated, and home to a surprising amount of biodiversity. 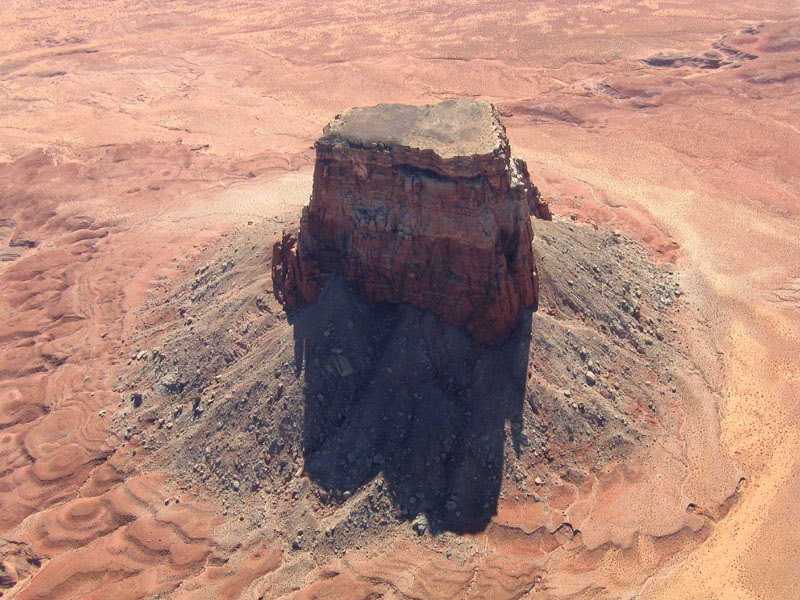 Belchers are caves that spew black smoke.  You'll hear lots of rumors about them, but they are devilishly hard to explore.

Chimneys are pillars of sulfurous accretions that tower over the landscape.  Volcanically-heated water runs down the sides, full of dissolved minerals and heavy metals.  They are easy to find, given the large amounts of steam that they give off.  Bacterial forests are thickest here, and the jagged landscape is home to multitudes of small crabs that graze across the rocks. 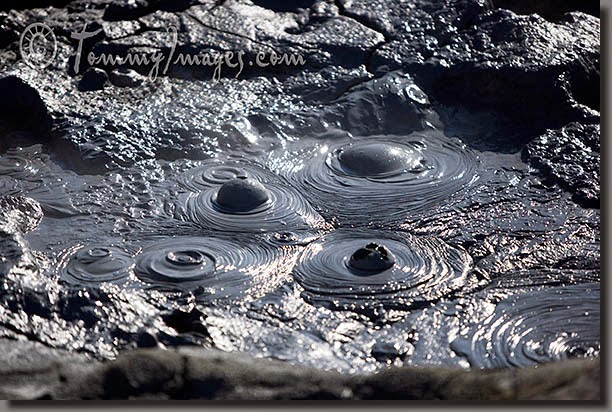 The Church of the Old Earth is a small church, built into the side of a hydrothermal vent.  Like the rest of the church-occupied Waste, it is intermittently staffed, and goes through cycles of abandonment and frugal repair.

The Choking Mountain is a landmark in the Waste.  It's visible on windy days, but on most days it is obscured by the huge amounts of smoke the seep out through it's sides.  Climbing a mountain is difficult, but climbing a smoke-covered mountain is nearly impossible.  Which makes the metallic structure at it's apex all the more perplexing. 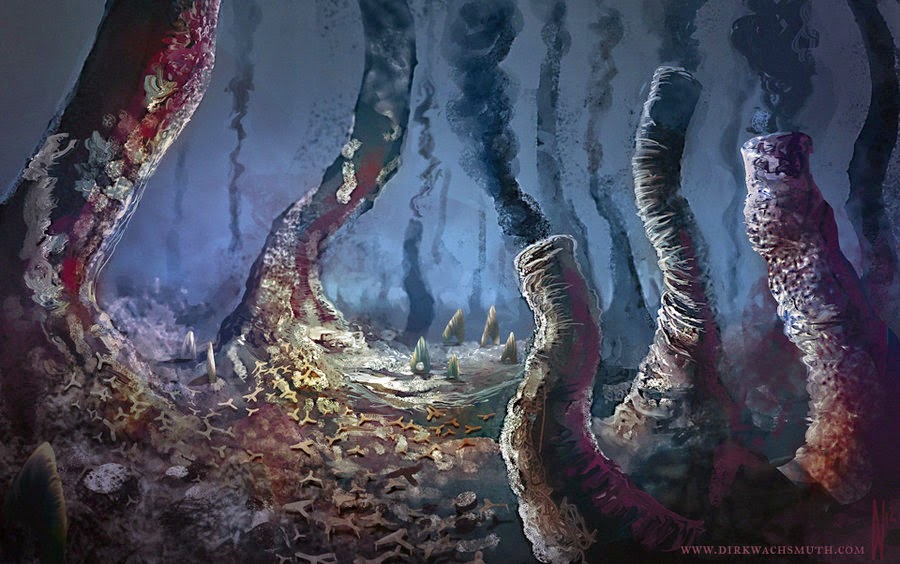 The Midnight Waste is formed by the smoke-shadow of the Choking Mountain.  The mountain's smoke and local wind are so reliable, that the area downwind is plunged into permanent midnight.  Frost covers the soot-stained stones, and black ice chokes the ravines.  Nothing lives here except a clan of naus-garants, who have acted on the instructions of the Great Architect and built a alchemical laboratory-city inside the black ice.

The Sea of Foam is small, but it is notable for being the only stable source of the brown foam that periodically floods the mudflats.  The Sea of Foam has some interesting things living on the bottom of it, that sometimes venture out when they get too hungry.  The Sea of Foam is actually more dangerous than water, since you cannot swim in it nor breathe it.  The orcs sometimes use specialized boats to traverse it.  With a huge length and depth, the boats have a massive displacement.  The orcs mostly use them to assist in small raids. 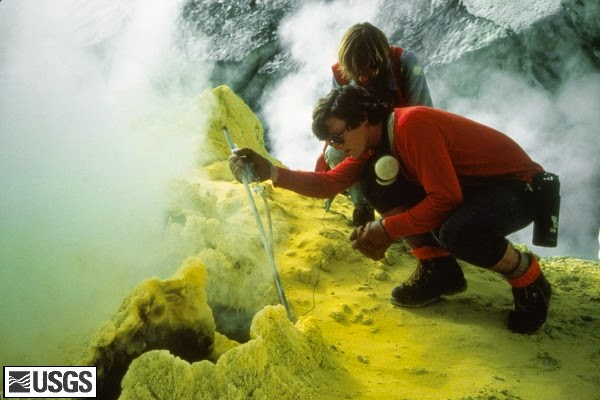 The Sky Reef can be found on one of the mud-flats near the Sea of Foam, where it is subject to almost-daily floods of foam and water.  It resembles a marine reef, with calcified structures resembling fans, brains, ridges, and gnarls.  The bacterial colonies that built this place are tended to by 1d6 druids of exceptional temperament.  There are other small reefs on the flood plains of the Waste, but this is the largest one.  There are other bacterial towers, too, but the largest ones can be found here.

Exports of the Brimstone Waste include: sulfur, mercury, lead, and titan gold. 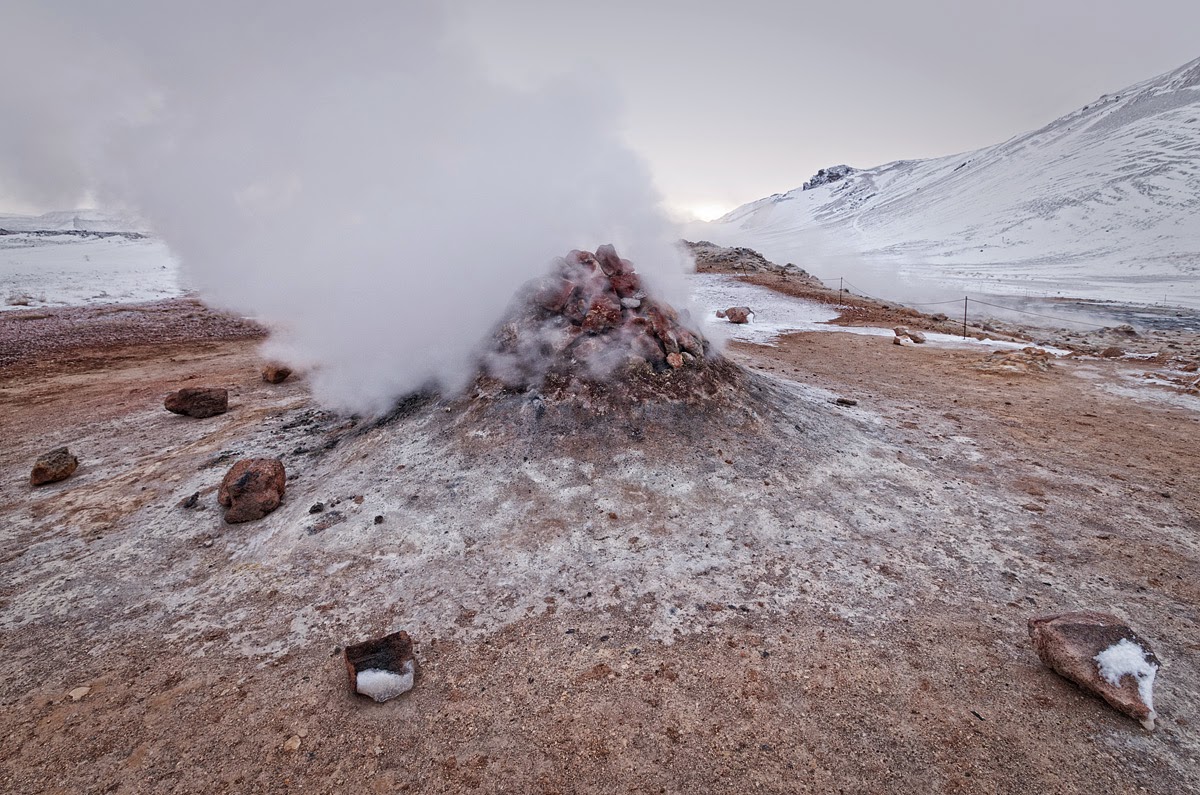