A Simian Wrote This

This is a continuation of my earlier article about non-human races. 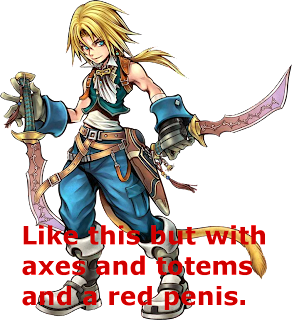 The zerino have monkey tails.  Some have mohawks.  They’re a bit hairier than the other races, and their hair is invariably blonde.  In fact, a person with blond hair in Centerra is often assumed to be at least part zerino.

An unbroken line of long, thick hair runs down the center of their back, from the nape of their neck to the top of their tails.  This is called their gurler, and most zerino braid it and fill it will beads (blue to honor Yasu, many colors to follow Furo).  Their tail is thick, muscular, and strong enough that a zerino can hang upside-down from one.

The genitals of both genders are bright red. There is no shortage of jokes or slurs because of this.

The zerino are known around the world as sailors.  Most of them follow the powerfully syncretic pseudo-religion called Furo, which forbids many of them from living on land for any length of time.  In fact, they can be found on both sides of the Centerra. Among their ranks are many potent stormsailors.

This is when you sail across the sky atop a platform of water.

It is difficult to pick up that much water with magic (impossibly so, most claim), but it is much less difficult to collect rain water in a single place, as it falls, so that a single location is mostly water.  Put enough water in one place and you'll have enough buoyancy to support a ship.

Stormsailing across a continent is difficult, since three storm-magi must be on deck at all times.  Usually, the flight over the Abasinian isthmus is done in a single, grueling pass.  If you ever find a crashed and broken boat up in the hills of the Yalte Highlands, you’ll know it’s because a storm-magus faltered while sailing overhead.

The other mage who must be careful is the one holding the water beneath the boat.  If they fail to delay the water below the ship long enough, the body of “sea” that the boat floats upon will fall through the water.  Although boats are buoyant—they can survive their bottoms poking through the clump of water.

And because the boat isn’t under any magical control, it must still make sail on the tiny lake of water that’s collected about it.  It’s a bit silly to see one of the leery zerino ships sailing over the hills, with most of the rain from miles around funneling on top of it.  The tiny figures plying the sails.  The half-drowned captain still prying the tiller.  The thousands of gallons of water pooling around it like a stormy blue pillow, where it runs off like a waterfall to the ground below, where it drowns chickens and turns farms into mud.

The zerino paint their ships in gaudy pastels and carve them to look like animals. Others might be satisfied with a figurehead, but the zerino carve their entire ship into a figurehead.

They have a bizarre sense of levity that comes over them in mortal situations.  When faced with death, they are cheeringly optimistic.  When dying, they tell jokes.  When their house burns down, they might invite the neighbors over for a barbecue.

They find horror and sadness in small things.  A zerino might become depressed for days after he finds that he has eaten the last of his apricot preserve.  Another zerino might feel insulted after a guest contracts botulism from food that the zerino served them.  (“Why would you do that?  Now my food is poisonous!”)

Infuriating to some, zerino rarely settle for a straight-forward answer when they have time to give a longer, more ambiguous answer.  They’re also quite chatty, and are very physical with their friendships.  Friends kiss each other on the cheek when they meet after an absence, and you aren’t close friends with a zerino until you’ve groomed each other (e.g. washed each other’s backs).

They also dress like shit.  Even the rich ones.

The zerino are aggressive idolators and assimilators. You will often find them wearing tokens and symbols of all the world's religions.  They will tell you that they are disciples of all of the world’s religions, since it is not wise to go against a god.  Outsiders, however, call their religion Furo.

Furo differs from practitioner to practitioner, and in most cases is just a vast collection of superstitions, taboos, and rituals all imitated from other faiths, because something in that practice appealed to the zerino.  They’re spiritual magpies.

Furo might mean turning all of your whistles into sneezes, or else fish that you eat will return to life in your belly.  It might mean saying a four-word prayer before every sip of tea, in order to keep the tea hot.   Or to never tie knots while sitting down, or else your intestines will be tied into knots instead.  It might mean saying a prayer to Iasu while simultaneously praying to Oshugoth, the Drinker of Marrow.

And you will never find a follower of Furo who admits to any contradictions between their beliefs.

Again, Furo revolves around totems and idols, collectively called toki.  In many cases, their gods might even be used as currency, and you might hear of a zerino who traded his entire cargo for an idol carved from vandalwood.

I heard a story about a zerino who was being cursed by one of his own idols.  After trying many solutions, he only found peace when he dug up his dead grandparents and put their skulls in a burlap sack with the idol, so that they could do battle with it.  After nine days and nine nights, the idol had calmed down and all of the milk for miles around had spoilt (even the milk still inside the cows).

When two zerino meet, the first part of the conversation is often spent figuring out if they have any mutual acquaintances.  This is mostly lies.

“Do you know Shielafan? The seamstress in Terudo? You know, with a titties like fat dolphins but who is a sadly inadequate kisser?”
“No, I don’t think so. But in Terudo I know the merchant Veruciv. You’ve probably seen his mansion overlooking the harbor, with the gold panels and the olive trees.  He’s the richest man on the island and he is my brother.”
“Ah, yes, I DO know Veruciv!  How is he?  Tell him that I want the money that he owes me.  It’s been over a year since his last payment.”

So zerino are merchants, because they sail everywhere, obviously.  But a lot of them are also pirates.  Some are both.

Seriously, it’s only weird the first time a zerino asks you braid their back.  After that it’s kind of sexy.

In combat, zerino prefer to fight with axes.  Aboard a ship, they wear boarding axes at their belts the way other sailors wear cutlasses.  Many of them also have a type of lightweight, double-headed dueling axe called a pistira, and some are quite deadly with it.  Pistira duels are more common back in the Zyrolian Isles (their homeland), but you’ll see them if you frequent the ports.

The exact commandments vary with usage, but Furo usually requires its practitioners to remain near the ocean.  Or better yet, sleep on a boat.  Of course, there are many zerino who follow a brand of Furo that has no such prohibition.  Some zerino don't even follow Furo at all, and have joined the Church of Hesaya. Ocean-dwelling zerino invariably refer to these land-dwelling zerino as "outcasts", even the ones that were born on land and have happy families and communities to return to.

Although they rarely mention it, some zerino can speak to birds.  Those who have the gift rarely use it, because birds tend to be both stupid and/or annoying.