Figuring out surprise and encounter distance is the kind of fiddly RNG that you're expected to do when setting up a scene.  It's tedious, it's in the background, and worst of all, it's unimportant.  Who cares if the encounter starts at 100' or at 75'?  I suspect that most GMs fudge it.

Maybe we can make it less painful. 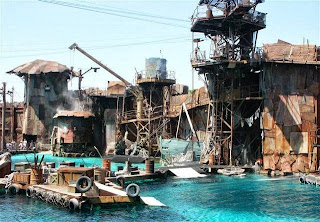 The old standard is a 2-in-6 chance for surprise.  And then you roll to determine distance.  But can we combine those questions?  Can't we just restate the question as "How close can the other guy approach before I notice them?"

So let's throw away the idea of a surprise roll and start thinking of it as an alertness roll.

Rolling a big number means that you hear them farther away and aren't surprised.  Rolling a small number means you don't hear them until you smack into them.  Each side makes this roll.

We can use the same result to figure out encounter distance.  I'll assign some numbers.  I'll double the distances for the 3-6 results because those are supposed to be farther away.

If it's asymmetric, use the more alert party's result to figure the distance.  If the orcs are ambushing the PCs, the PCs' roll dictates how close the orcs are when they launch their ambush.  So if the orcs roll a 5 and the PCs roll a 2, that means that the orcs hear the PCs from 100' away, and will try to launch an attack from 20' away. 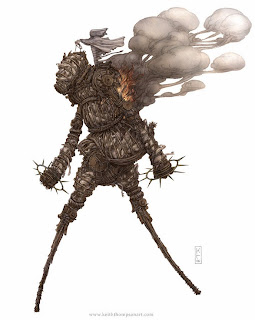 Other ways to fancy up this system!

- Modify the encounter ranges for different environments.  x5 for forest and x10 for grassy hills.

- Rogues with soft shoes get Stealthosity, which means that enemies subtract 1 from their Alertness rolls.  This effectively gives them a 3-in-6 chance to surprise.

- If you're stomping around with iron boots and donkeys and bards, you get negative Stealthosity, and only surprise with a 1-in-6 chance.

- Other dudes get Alertnosity, which lets them add 1 to their Alertness rolls.

- If you are sitting quietly, keeping watch, and have a Wis bonus, you get Alertnosity, too.

- If you roll two different-colored d6s at the same time to figure this out, you can use the die that landed closest to you to figure out the environment between the PCs and the orcs.  That is, the environment that the sound is bouncing through.
1 - behind a door
2 - around a corner
3 - from an intersection
4 - from a stairwell
5 - around two corners
6 - behind a wall

- This might simplify monster descriptions, too.  You can just put "Alert" or "Stealthy" under their abilities line.
Posted by Arnold K at 1:57 AM