The Incomprehensible Virility of Goatmen 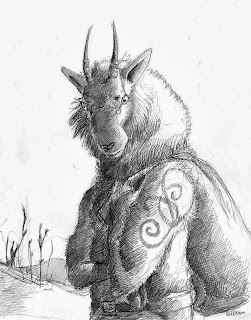 The beastmen of the isles are surrounded with more misconceptions than any other race.  Their name for themselves is druhok.  In combat, they're known for being tough-as-hell to kill.

They all have large horns and a sloping face and large antlers, but these are defined more-or-less randomly during organogenesis.  Sometimes this chaotic process produces results that are similar to elk or deer, but their faces just as often resemble not other animal.  They aren't hairy, which makes the bestial face look a bit odd.

Beastmen are incomprehensibly virile.  They can certainly impregnate any mammal, and quite a few non-mammals.  Smaller mammals give birth to skewed little halfbreeds that are usually sterile and sometimes have small horns of their own.  (Animals in their homelands sometimes feature horns for this reason.)  Larger mammals actually produce genetically normal beastmen, so in theory, a solitary beastman could buy a cow and repopulate.

And it's not just the usual methods of transmission.  Even their blood and spit carry their seed, and fertilization can occur like catching a cold (aside from the more traditional vectors).  After warring with beastmen, soldiers are advised to wash their hands before returning to their wives.

Druhok warbands on extended campaigns sometimes travel with herds of goats that they use for food, recreation, and procreation.  Druhok warbands are bad news.  Sometimes they go on world tours.  Twenty years later, the warband that returns home contains only a few original members and quite a lot of their children.  Also lots of plunder.  Also a shit-ton of goats. 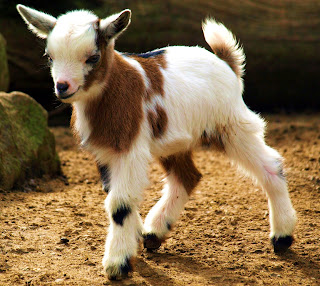 When a druhok is born, it resembles a baby goat or lamb.  After about six years, the young druhok quickly metamorphizes into their adult forms.  It's a more awkward puberty than most.  It's also a good reason to only buy your baby goats from licensed sellers.

Druhoks remember their childhood, when they walked on four legs and could only bleat.  For this reason, many of them empathize with horses, deer, goats, sheep, etc.  It doesn't stop them from hunting, but they treat baby farm animals very well, and some are uncomfortable watching someone abuse a horse.

Beastmen lack a nimble tongue and full lips. Their language is a mixture of grunts, barks, and hand signals.  It's a complex language full of nuance, metaphor, and epic poems. 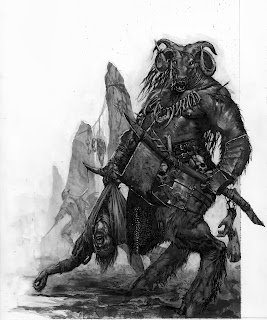 Back home, they build cramped towns filled with fountains and arcades.  They sail between the islands on outrigger canoes, study astrology+astronomy, and worship hot springs and whirlpools.  They cover their kings with ribbons and bells, and brew vast amounts of wine.  They're a bit misogynistic, as you might suspect.  Most come from big families.  Most have a few dead siblings that they quietly honor by setting out bowls of water in quiet places, and then letting it evaporate.

All beastmen are male*.  The same biology that allows them to breed with any mammal also dictates that all of their offspring are male beastmen. 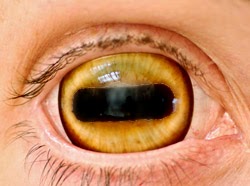 Most beastmen are goat-men, because goats are easy to maintain and produce quick-witted offspring of medium builds.  Bull-men (minotaurs) are discouraged, as they tend to be too aggressive and stupid to assimilate into society.  Pig-men (orcs) are shunned for cultural reasons.

Stereotypes of beastmen usually begin and end with the goat stuff, but in private, beastmen are laconic, frugal, and xenophobic.  They love wine, music, and dance. 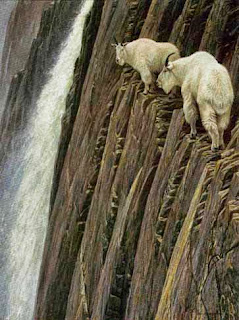 *There have been, of course, a few very rare exceptions.

And you know that Beastman warlords have, like, 16 charisma.