Everything You Know About Ghouls is Wrong 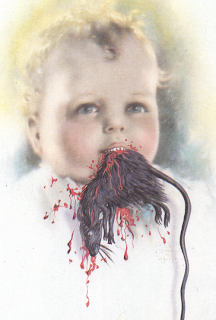 The same rituals that purify a corpse for the afterlife also sustain ghouls in life. They get potent powers from eating the consecrated flesh of the faithful, and even a warped form of immortality.  The only thing better than eating corpses in churchyards is eating the animate undead, since necromantic energies fuel them as well.

Any man can become a ghoul by digging up enough bodies in the churchyard and consuming them.  The change is supposed to come after 100 corpses, but in truth, the change is probably gradual. Only the most desperate ever willingly become a ghoul, and it is supposed that many form incidentally, from some original incident of cannibalism.

Because everyone knows that once you have indulged in cannibalism, the urge to return to it becomes stronger.  Eventually the urge becomes an instinct, and then the instinct becomes a drive, and then it rules out all other urges.  The oldest, most powerful ghouls have been so overwhelmed by these instincts that it is incapable of pursuing any other goal.

A freshly-minted ghoul is a puffy man with bad breath and a stutter.  An ancient ghoul is an giant beast that has forgotten his language and his name.  And so, although it may be a form of immortality, it is a very poor one.

Like all living things, they eventually age and die.  But when a living ghoul dies from old age, it quietly transitions into undeath.  Many ghouls don't even notice the change.

DM's Note: by default, if your players encounter a group of ghouls, about 50% will be living and the remaining ones will be undead.  Ghouls serving a newly-active necromancer will probably be all or mostly alive.  Ghouls encountered in a long-sealed tomb will all be undead.

Ghouls don't paralyze you with a touch--they cause agony.  (For a default HD 2 ghoul: save or endure agony, which causes you to take 1d6 non-lethal damage each turn unless you spend the entire turn writhing in pain.  50% chance of ending at the end of each turn.)

But they have another power that the living don't often know about.  Ghouls are invisible to the dead.  Zombies will shuffle right past them, and even intelligent undead sometimes make the mistake.

So most ghouls believe they have little to fear from the dead, and go about consumption of them at a leisurely pace. The only thing that excites ghouls is the prospect of killing the living, who they both fear and pursue with a freakish tenacity. After so many years of eating cold flesh, the experience of biting into warm meat seems a guilty perversion.  After killing a living person, a ghoul will often lay it out and kill it slowly, so as to study the process of death. They are fascinated by the process, and will stroke you and watch you die slowly. Unless they're hungry.  And they often are.

You'll often find them serving necromancers.  The necromancers obtain an intelligent servant, and the ghouls obtain a reliable supply of animate flesh.  (Zombies have a high rate of attrition; they fall apart and must be replaced.  Ghouls can dispose of the waste.)

Honestly, ghouls are way worse than a lot of other undead. They're strong, they're hungry, and they're cunning fucks who will tell you lies even while they eat you. 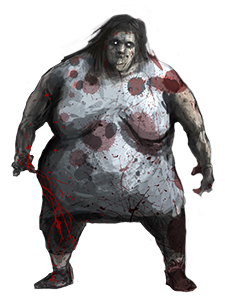