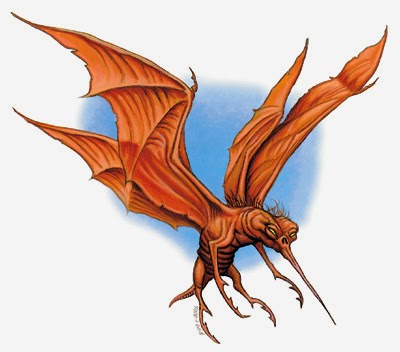 HD 1
AC as chain when flying, as unarmored when attached
Blood drain (1d4 + 1 con damage + attach)
Fly as bat
Morale 6
# Appearing 2d6
Special: If a stirge sucks the blood of someone affected by a potion, they also gain the benefits of that potion.  Drinking a potion while a stirge is attached to you also confers that benefit to the stirge.
Special: The bite of a stirge is painless.  Sleeping characters should make a wisdom check to awaken whenever they take damage from a stirge bite.

Attached monsters:
Stirges look like fibrous leeches or slugs or tongues.  They are the size of two fists, except they have a row of caterpillar legs on the bottom and a pair of slimy bat wings on the back.

They spend most of their time resting in on cavern walls or in crevices, where they spread their membranous wings on the stone around them for stability.  In this way, they look like a stringy nodule of fungus, or a ball of worms.  (And are often misidentified by dungeon neophytes.)

They hunt through their subterranean territories in large flocks, but they also spend a great deal of time sleeping on walls or amid stalactites (noise wakes them up).
Stirge nests look like an inside-out clam.  Fleshy folds that trap moisture, built around a calcified shell, porous with tunnels and sinuses.  In the center of every stirge nest is 2d6 juvenile stirges (harmless, lacking teeth and wings) and a mass of black jelly.

The black jelly is dungeon honey.  If eaten, a dose of dungeon honey heals as a potion of cure light wounds, but also causes 1 point of Con damage.

Dungeon Honey Variations (d6)
Stirges create different types of honey based on what kind of blood they've been sucking.  This might not be a random roll: when considering what type of dungeon honey is in a certain stirge hive, consider what kind of monsters are most common in this dungeon, or closes.  All forms of dungeon honey cause 1 point of Con damage.
Variant honey usually has effect on the adult stirges--it is only eaten by the juveniles.
Posted by Arnold K at 9:31 PM