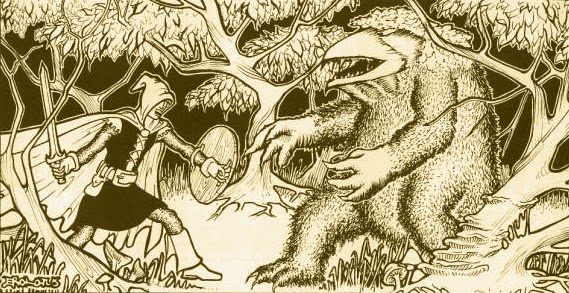 HD 5
AC as chain
claw/claw/bite for 1d6/1d6/1d10
Speed as human
Morale 10
# Appearing: 1
Special: If both claw attacks hit against a human-sized opponent, the owlbear has the option to knock its opponent to the ground and pin them.  Against a pinned opponent, all attacks automatically hit.  It usually reserves this ability for opponents who royally piss it off.

Owlbears are huge and highly territorial.  While PCs can sometimes placate them with food and an immediate retreat in the direction they came from, owlbears never retreat from combat once they've been injured.  They cannot growl or bark; instead they hiss, hoot, or screech.

They live in huge, branching burrows where they lay their eggs (1d3 rooms, including a pile of leaves for hibernating on).  Owlbears swallow their prey whole, and later regurgitate the indigestible parts.  These huge clotted pellets of hair, antlers, teeth, and bones are called owlbear pellets, and they can be as large as a man.  These pellets are a sure omen that you are in owlbear territory. 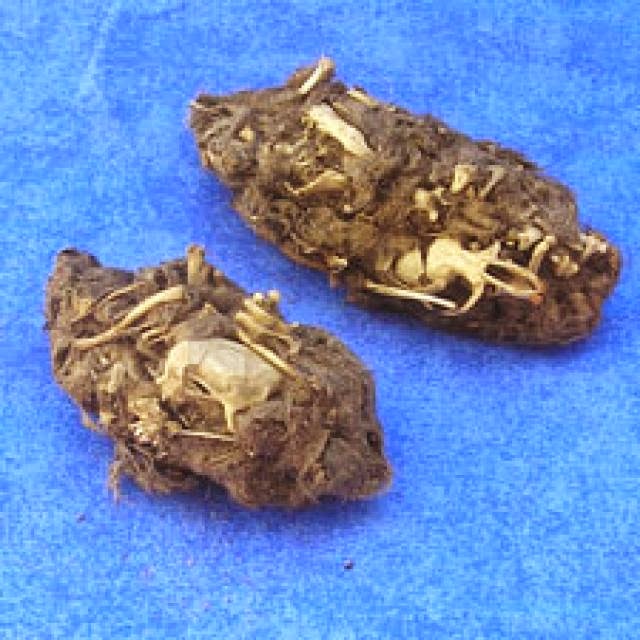 The origin of owlbears is not known, but it is generally agreed to be unnatural.  They seem to want to fly.  They stand at clifftops for hours, shifting nervously, and seem to take special pleasure in killing birds, whose corpses they abuse.  They seem to be predisposed to mental illness.

Witches shape the habits of owlbears, but never dominate them.  Their hoot is an ill omen.

Full Moon Encounters (d6)
Owlbears are known for unusual behavior during full moons.  They are bizarrely aggressive during this time, and attack all that they see without provocation.  (During full moons, they always attack, and are immune to pain and fear.)
Posted by Arnold K at 7:35 PM