This is a class that's a bit similar to a wizard, except that their abilities are limited by how many monstrous corpses they can get their hands on.  In my game, there was a lot of competition with the ghoul character (who needed to scavenge monster corpses to heal herself), so monster corpses became something of a commodity, which was cool.

I have a habit of letting everyone make a custom class if they wish, and in this case, the player wanted to play Razzil Darkbrew from DotA, who is basically a little dude who rides on top of a big dude, throwing potions and turning things into gold.  "That's pretty good concept for a character," I said, and then wrote this. 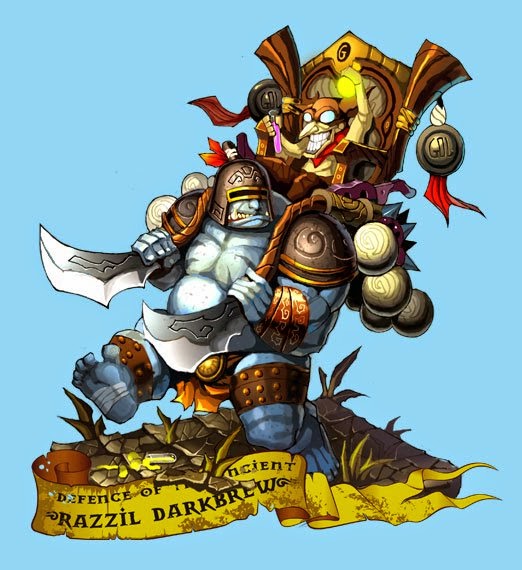 Manrider Alchemist
Requirement: You must be Small.  (Traditionally: halfling, goblin, or grippli.)

You can turn monster corpses into extracts.  Each corpse takes 10 minutes to render, and is destroyed by the process.  This yields a lesser extract of a specific color.  Corpses of monsters that are HD 1 or less have only a 50% chance of yielding an extract.

An extract can be used to make a potion (see below) or as research, to learn a new potion.

A level 1 alchemist begins the game knowing one random extract of each color.

You can make a potion from an extract.  Red extracts can only be used to make red extracts, etc.  You can only make potions that you already know.  It takes 1 hour to make a potion.

You can spend a day in town attempting to recruit a brutish minion.  This takes 1 day and costs 100s, at the end of which, you must succeed on a Charisma check.  The minion you hire is similar to other hirelings, except that they are utterly obedient and have +1d8 more HP than they would normally.


If you are riding on your minion's shoulders and would take damage from an attack, you can command your minion to take the blow for you.  This has a 50% success rate (otherwise you minion fails to block the attack).

The same rules for extracts apply: they can be used to make a potion or sacrificed to learn a new (random) potion.