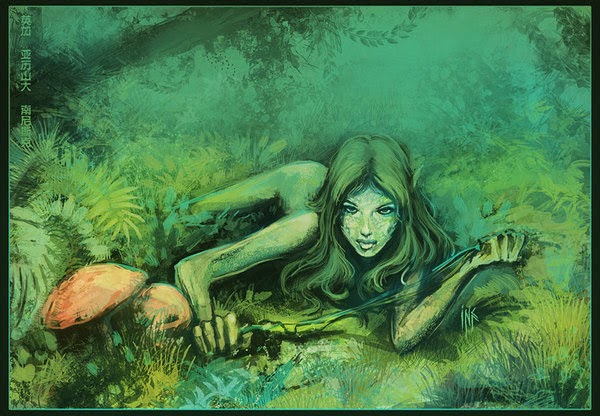 Hide in plant: A dungeon dryad is bound to a particular plant.  She can hide inside this plant, phasing in and out of it as easily as passing through a beaded curtain.  She can bring other willing creatures in there too, and usually has a small room in there, illuminated by glowing lichens.

Dryads bond with plants, but there are few plants in dungeons, as there is usually very little light.  This limits them to (a) plant roots, (b) carnivorous plants, or (c) symbiotic plants like lichens.

Like all dryads, they appear as beautiful women (though with grey skin, black hair and nails, and pale eyes).  They sometimes take a liking to humans and use their charm ability to get them to remain with them, for companionship.  However, they have an unusual view of beauty, and are especially attracted to ugly humanoids, or those with the lowest Charisma.  Because of their inverted beauty standards, they often lament how ugly they are.

Dungeon dryads who become pregant give birth to a thumb-sized seed a month later, which they plant in their grove.  This grows into a pink gourd containing the fetus, who eats his way out 9 months later.  These half-breeds have a 50% chance to be monstrous (idiotic, muscular, deformed) and a 50% chance to be fey-like (beautiful, aloof, callous), and will always have plant traits.  A dryad's grove will have 1d6-2 (min 0) of these at any given time, usually in a protected corner.

A dungeon dryad is born when a dryadic halfbreed from the previous paragraph encounters their soulmate.  This is (almost) always a plant.  Then they bond with the plant (something you don't want to be present for) and become one and live inside them and share in all things and watch eternity pass them by in sap-slow contentment.

The only things that a plant can't provide are sex and chit-chat.  This is why dryads are always seducing people.

A dungeon dryad will have 1d3+1 different plants (see below) in their grove, which may encompass multiple rooms.  They are capable of being hospitable, if treated well.  Half of all dryads are male, but I bet no one is going to put a male dryad in their game.

A day after passing through a dryad's garden, flowers will grow on your waterskins, rations, and in the hair of the party members.  Every dryad causes a different type of flower to grow.  The flowers will smell of woman, and are harmless.

*People who want to become a dryad's cuddle buddy will probably have to contend with the current cuddle buddy (if they exist).  They also won't be allowed to leave the grove until the dryad trusts them, which usually takes a month or so.

Tips for Using Dryads in Your Dungeon 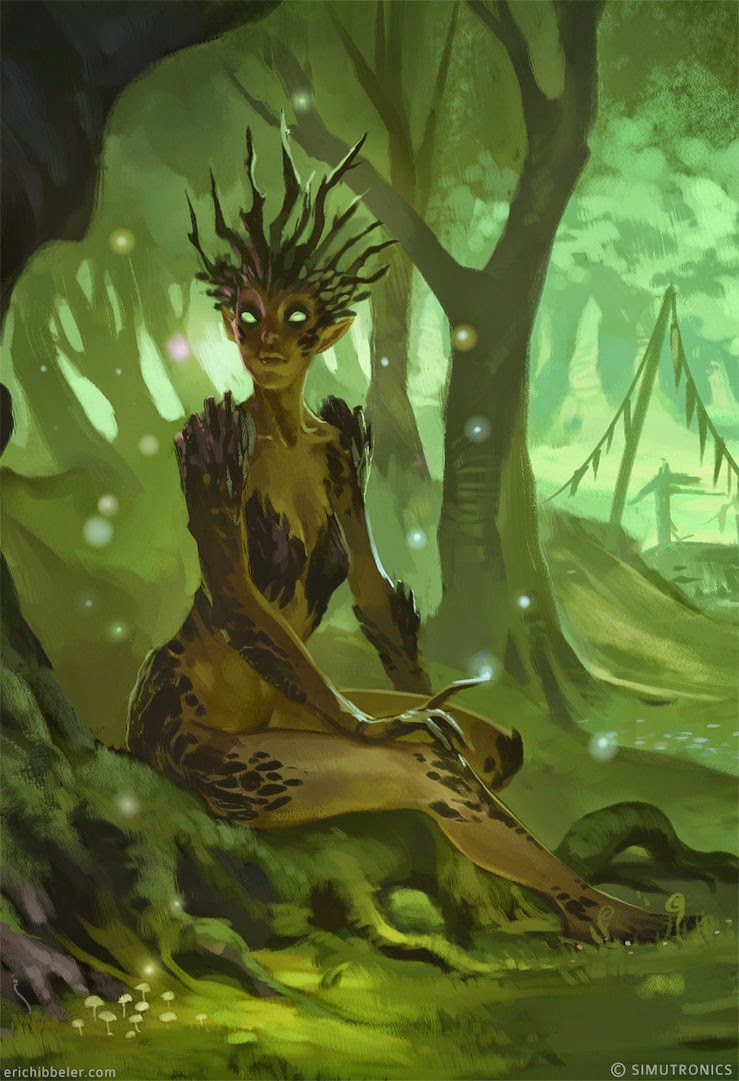 It's long: waist-high.  If it likes you, it's as soft as feathers.  If it doesn't, it's as sharp as razors (1d6 damage for every 10' traveled, or 1d4 if wearing full plate).  They create a tremendous amount of smoke if burned.

Note: Fires underground are exceptionally dangerous.  Not only will the smoke asphyxiate you, but it removes oxygen from the air (and dungeons usually have very low air cycling rates).

Dungeon grass is a hero among plants.  All plants hate animals (trampling and eating and burning) with a deep, implacable passion.  They hate humanoids especially.  Like pretty much everything else in Centerra, the plants have a spirit and a sentience that is hidden from view most of the time.  But plants talk to each other, and one of the things that they talk about is how they wish all the humans would just be sliced to quick-composting ribbons.  And dungeon grass is the one to do that.  It has the personality of a berserk samurai (although you'd only discover that if you used speak with plants). 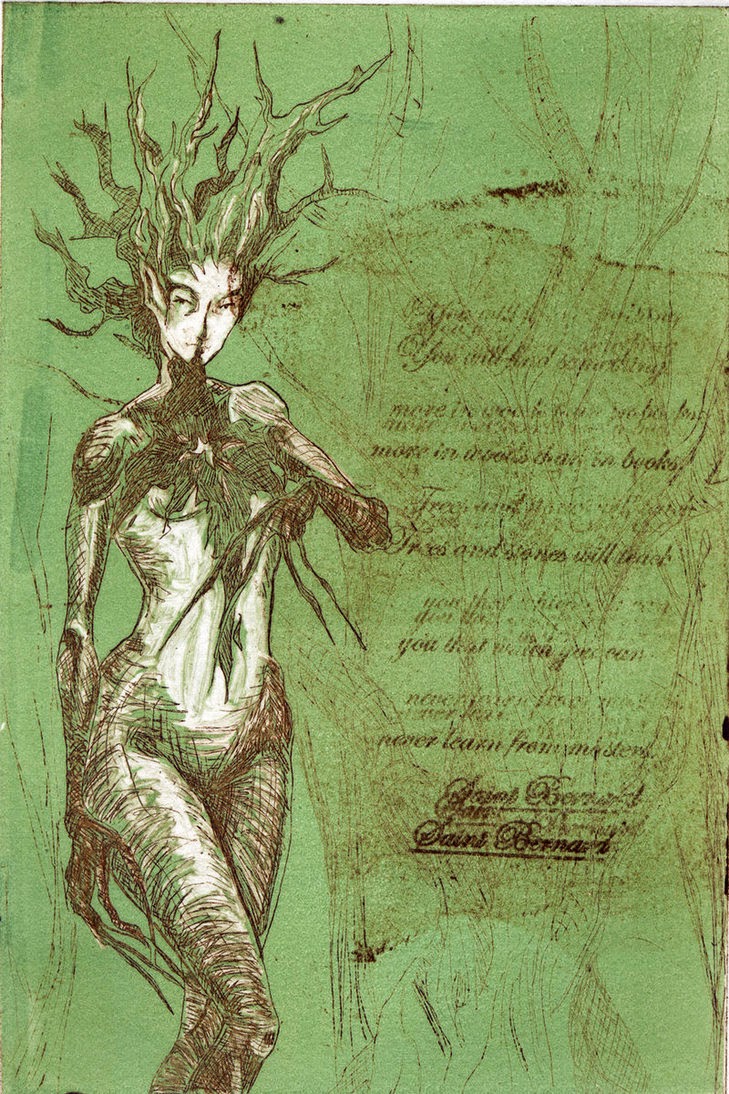 Not directly dangerous, but they fill the air with their tiny, floating seeds.  Whenever a creature takes slashing or piercing damage, the seeds immediately land in the wound and send roots spiraling into the flesh.  A yellow dandelion flower grows a moment later.  If you look at the dandelion poofs under a magnifying glass, you'll see that they have horrible little faces: a cross between an old man and a needle.

The flower grows so quickly because it is trying to kill you.  This is a fast way for them to get a large dose of fertilizer. 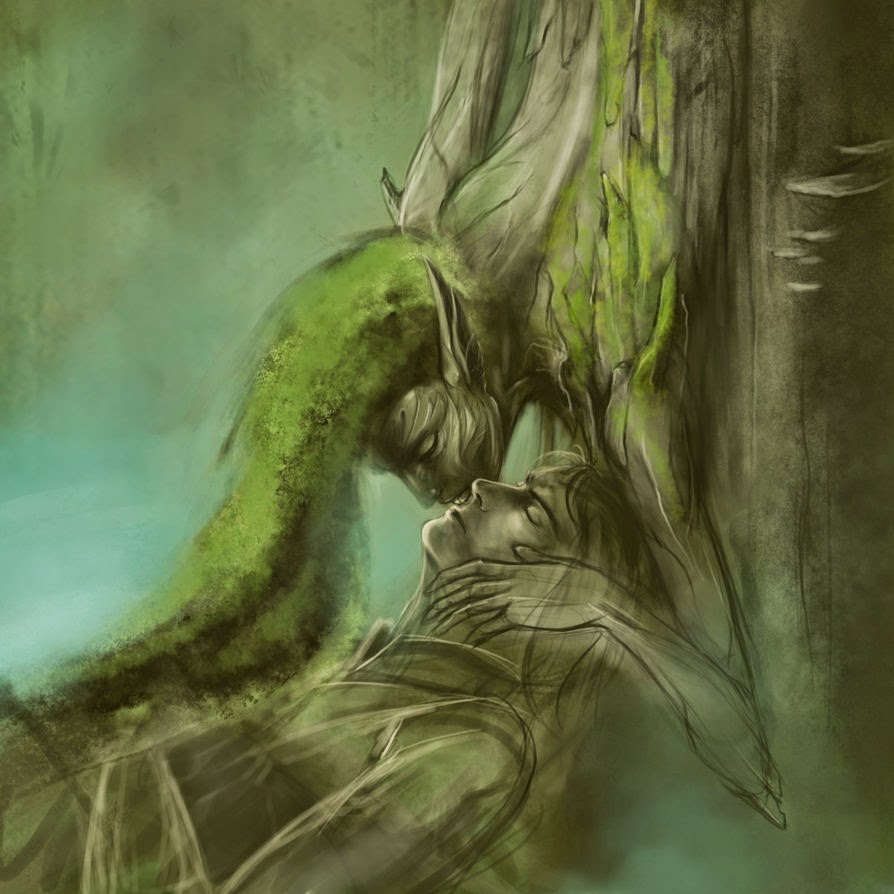 Stats as giant snakes, except immobile and immune to bludgeoning
Special dehydrate, detach

Dehydrate: All water-containing creatures within 20' must save or take 1d6 Con damage as they dessicate painfully.  Additionally, all the water in that range is likewise leeched by the tree.  This includes water inside waterskins.  Potions also dehydrate, becoming unusable until water is added back into them.

Detach: If you piss a rootwhomper off enough, it will bite through the part of it that attaches it to the ceiling and come "whomping" after you like a drunk man doing the worm on a dance floor.  You can burn them, but this will only burn their outer layer and stun them (which makes it look like you've killed them) but really all you've done is pissed it off.

These are huge roots that grow into a dungeon from above.  They are the roots of an equally huge tree somewhere on the surface, called a Scabrous Elm.  Dungeon dryads prefer these roots and often live in the central root mass (they prefer not to go above ground).  (In fact, they might even have another dryad living in the upper half of the tree, who then can sense but are afraid to go meet.)

Usually inert, they grow out of the ceiling in groups of 1-6.  They are rigid (they are wood, after all).  When living creatures come below them, they will with spread their gills and use their dehydrate ability.  When they attack, they start thrashing around and biting shit (at first glance, it is not obvious that they are motile). 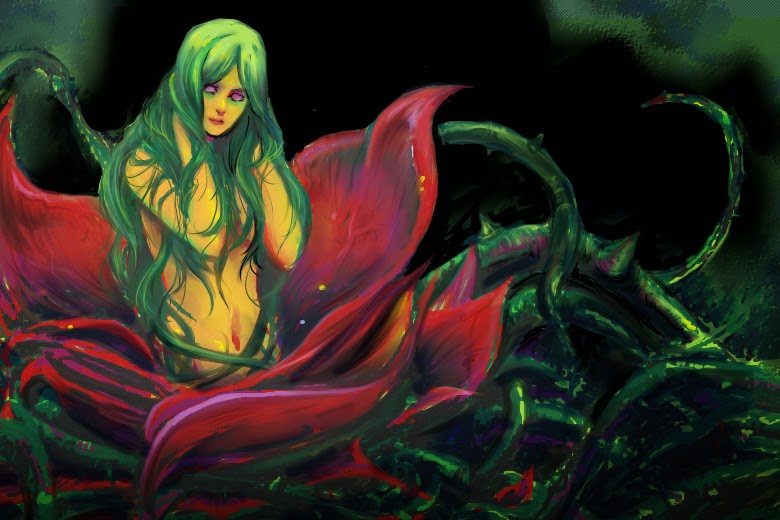 If a dungeon dryad doesn't bond to a Rootwhomper, she'll bond to a hell melon plant.  These are basically just cantlope plants, except that they may grow on the root or the floor (wherever the water table is) and instead of producing cantalopes, they produce cantalopes with fuzzy skin, like a peach.

When eaten, they are delicious, can feed a person for a day, and give a new save against any ongoing diseases.  Dryads will offer these to friends and enemies alike, often provisioning them with melons or playfully challenging them to eating contests.

The seeds are capable of growing in your tummy.  Each melon meal (assume 3 a day) will put one seed in your tummy, lodged innocuously against your stomach wall.  After 48 hours, the seeds will instantly grow into melons, dealing 1d6 damage per seed.  A constitution check can cut this damage in half.

If the hell melon plant is attacked, it will try to uproot itself and crawl away about as fast as a tortoise.  It will also remotely trigger all of the seeds, causing all seeds in stomachs to instantly grow into melons.

The dryad can also remotely trigger the seeds by snapping her fingers.  She is also capable of "disarming" melons that she offers as gifts, and will do this most of the time (unless she is certain that you're an enemy). 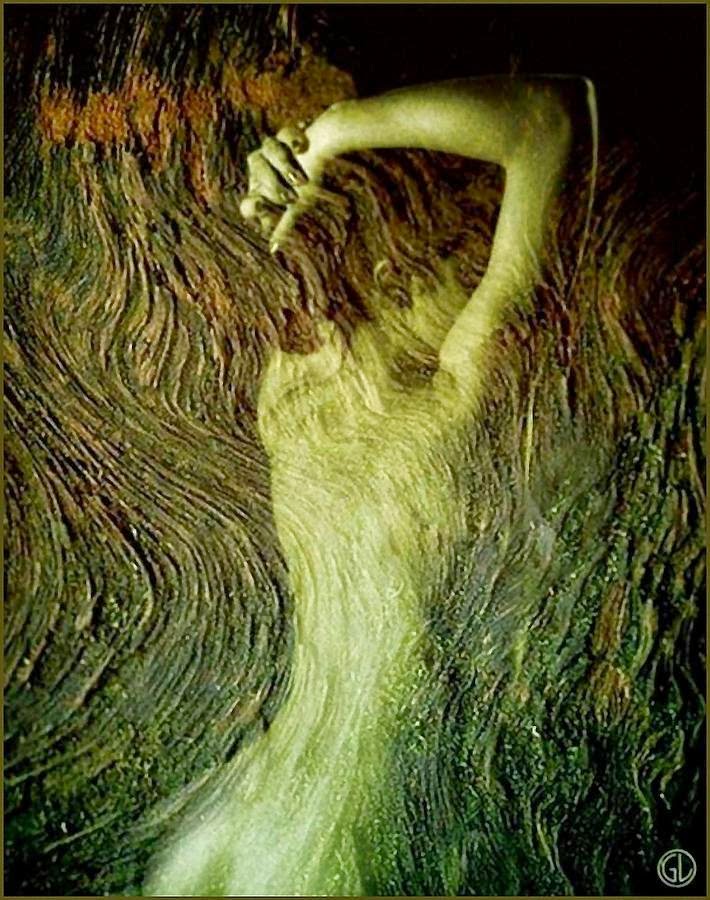 You can find them here, too.  Like all trees in a dryad's grove, they'll act to protect her, flinging their valuable melons like siege weapons.

Explode: when killed, they release a cloud of noxious blue gas.  All within 10' must save vs poison or take 1d6 damage.

They look exactly like a certain pokemon.  They fly by controlling air currents near themselves.

When at rest, they look like fat bodied plants, with several closed flower buds around their body.

Horrible Teeth: When a clapsnacker is attached to you, it embeds it's teeth into it's target's flesh.  This is so painful and encumbering that they get a -1 penalty for each clapsnacker attached.  Even after the clapsnacker has been killed or ripped off, the teeth (and the penalty) remain.  This penalty stacks up to -4.  Unless removed very carefully (3 rounds) the teeth do 1d3 additional damage.

They look like goblins made out of sticks, except that their head is like a venus fly trap.  They make a horrible clappy noise with their mouths when they run that sounds a bit like "snacky snacky".

When at rest, it's still pretty obvious that they're monsters.  They've got big goggly eyes that they use to stare at you, and bright red tongues that they use to lick their lips.  They have an uncontrollable hatred for carrion crawlers and carrion flies, which they will pursue to the exclusion of all other tasks.