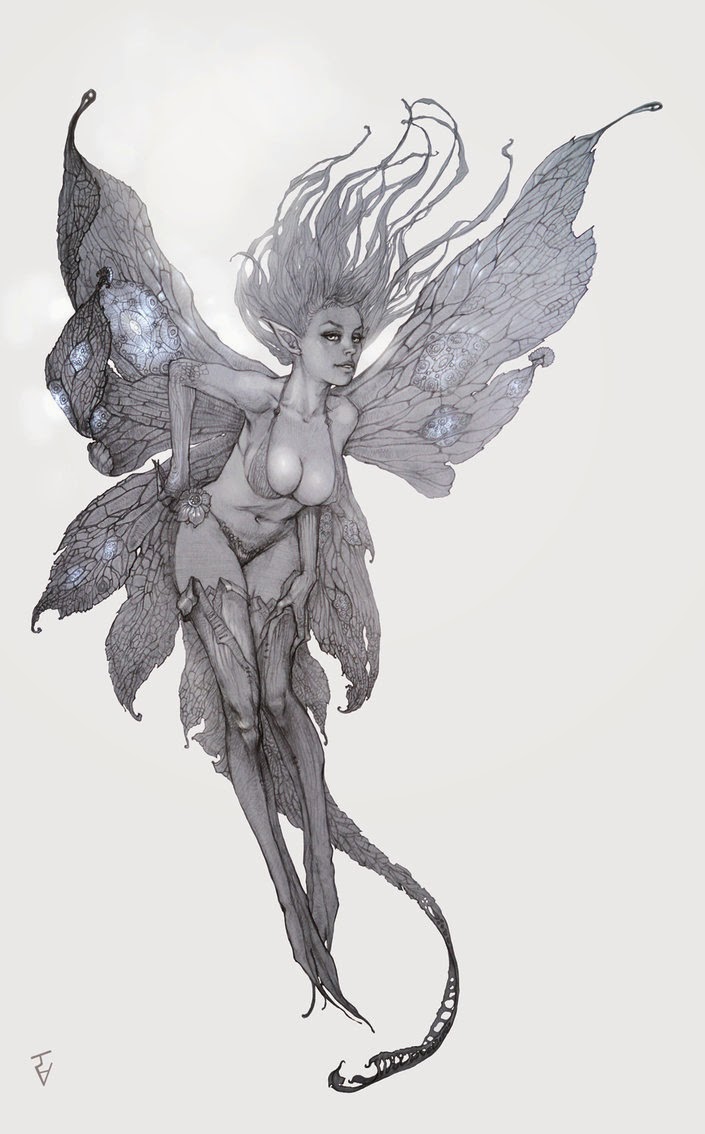 HD 0 (HP 1)  Armor as plate + shield
Shoot Arrow 1d4  Spellcasting (see below)
Fly as sparrow  Morale 4 Save 14+
*Fairy dust.  See below.
*Stealthy and Oblivious.  Surprising on 4-in-6, but being caught unawares the other 2-in-6 (usually because they're playing, dancng, singing, etc).
*Glamour.  Clothing, armor, and attacks are appear however the fairy wishes (often subconsciously, reflecting their emotions).

Each fairy is covered in fairy dust.  They can give this dust away, or you can shake it off of them.  A fairy without fairy dust cannot fly, but will recover overnight.  Fairy dust cannot be stockpiled, and disappears overnight.  When sprinkled on a creature, grants flight for 1 minute.  Each type of fairy dust has a secondary effect (see below).

Since fairies are created by the dreams of children, they share children's innocence, petulance, and callousness.  There are three types of fairies: good fairies, evil fairies, and noble fairies (who see themselves as adults, and therefore above this whole good-and-evil nonsense).  Fairies love children, but babies are often stolen and sent back to Fairyland, where they are put to sleep in order to create more fairies.

Good fairies are "good", but it is a child's notion of goodness.  They see themselves as the heroes of their own stories, and will do anything to uphold that role.  To them, live is a perpetual game of 'knights and orcs', and they are the knights.

Fairies all enjoy glamour--to a large extent, they can choose how their their clothing and hair appear.  Even their bodies are malleable to some extent.  A fairy's perception of themselves is always mirrored in their appearance.  A fairy's beauty is proportionate to how good they perceive themselves to be.  This is glamour, and it has a mirror side: a fairy's appearance is also reflective of how other's see her.  A beautiful fairy might suddenly shrivel and her wings droop the moment that the villagers discover that she killed the shepherd.

Around a fairy, minor magic happens spontaneously.  Flowers bid the fairy good day, captured witches turn into cakes, and fairies often bestow blessings that stem from nothing but their good intentions.  This is the universe rearranging itself to better suit the fairies in small ways.  In some ways, our reality is their dream.

Although they shun violence and abhor murder, even the least of good fairies possesses powerful magic, especially curses.  For example, gem fairies can turn all of your coinage into sparkly mud, no save.  They all enjoy beauty, compliments, and courtly language.  Niceness in general.

Because they have a child's grasp on morality, things like cussing often upset a fairy more than murder.  Children get in trouble all the time for cussing, but it's rare that a kid needs to be told not to murder someone.  So murder exists in an unexamined moral zone.

Fairies often exist at the center of an adoring group.  Usually children, animals, or some clan of bestial humanoids.

Lastly, fairies are demanding.  Whenever you meet a fairy, they will invariably want something from you.  They see themselves as absolutely entitled.  Most of them are very busy Making The World A Nicer Place, and if they ask you to help them do it, you should feel honored to be included. 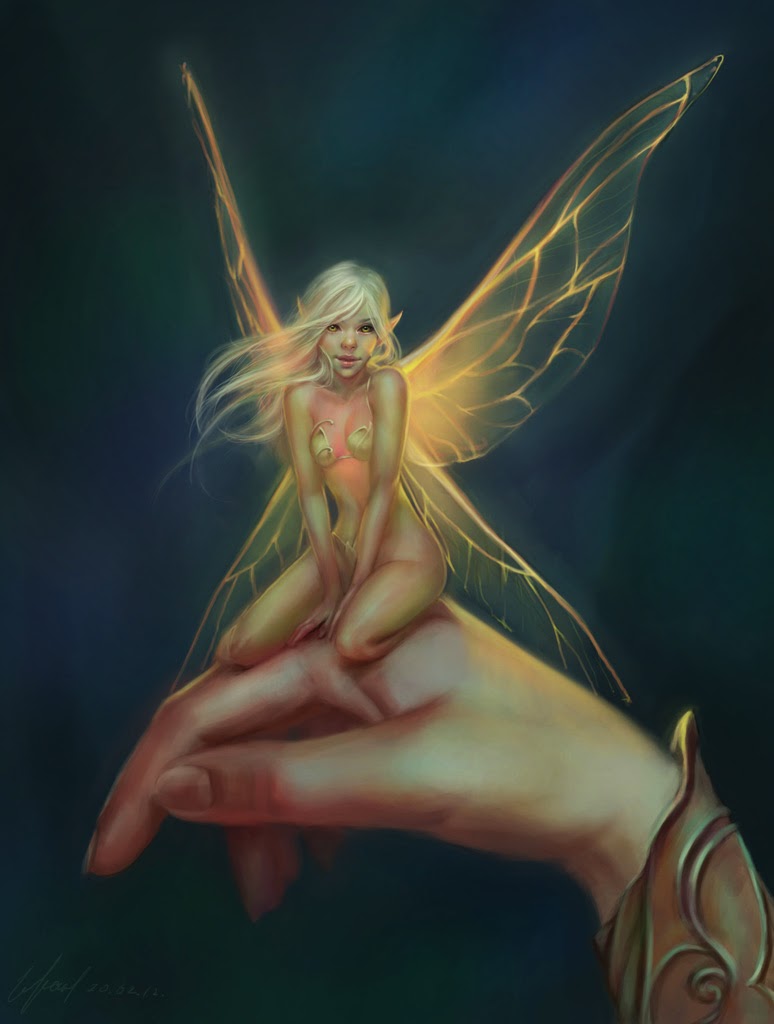 Candy Fairy
Candy fairies fly with pastel-colored dove wings.  They are the most playful.
invisibility, swords to sugar, charm
Candy fairy dust can also be sprinkled on food and/or drink, where it turns the substance to delicious candy and functions as purify food and drink.

Flower Fairy
Flower fairies fly by clinging to dandelion stems.  They value attractive people the most.
invisibility, food to flowers, entangle
Gem fairy dust also be sprinkled on a plant, which will cause it to perk up, grow a bunch of flowers, and gain the power of speech (as talk to plants) for 1 minute.

Gem Fairy
Gem fairies fly with quartz dragonfly wings.  They value attractive items and places the most.
invisibility, gold to glitter, glitterdust
Gem fairy dust can also be sprinkled on a gem to split it into 1d4 smaller gems, each worth half of the original gem.

Ice Fairy
Ice fairies fly by riding a large snowflake.  They like to do nice things for children, especially delivering presents to underprivileged kids.
invisibility, tinder to toys, ice (as grease)
Ice fairy dust can also be sprinkled on a fire to instantly extinguish a 10'x10' area of flame.  If sprinkled on a fire creature, that creature takes 3d6 damage (save for half).  If sprinkled on a fire-breathing creature, that creature must save or be unable to breath fire for 1d6 turns.  (However, these creatures will gain flight for 1 minute, so be mindful). 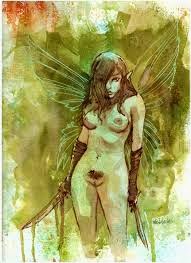 New Spells
Usually cast just prior to turning invisible and flying off.

Food to Flowers
All of a character's rations turn into bouquets of beautiful flowers.  Potable liquids turn into hibiscus nectar.  No save.

Gold to Glitter
All of a character's money (precious metals, promissory notes, etc) turn into worthless glitter.  Gemstones are immune to this effect.  No save.

Swords to Sugar
All of a character's weapons turn into sugar-crystal versions of themselves if it fails a saving throw (make a save for each weapon).  Sugarified weapons shatter the first time that they roll maximum damage.  Shattered sugar weapons yield a number of rations equal to their die size.

Tinder to Toys
All of a character's flammable items (potions, lantern oil, potions of fire breathing) turn into toys (all of the same type of toy).  Roll on the toy table; there is a 25% chance that one of the toys is magical.  No save. 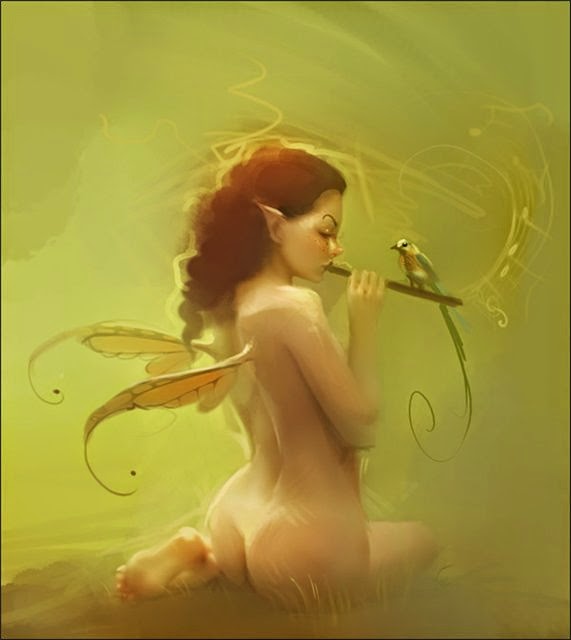 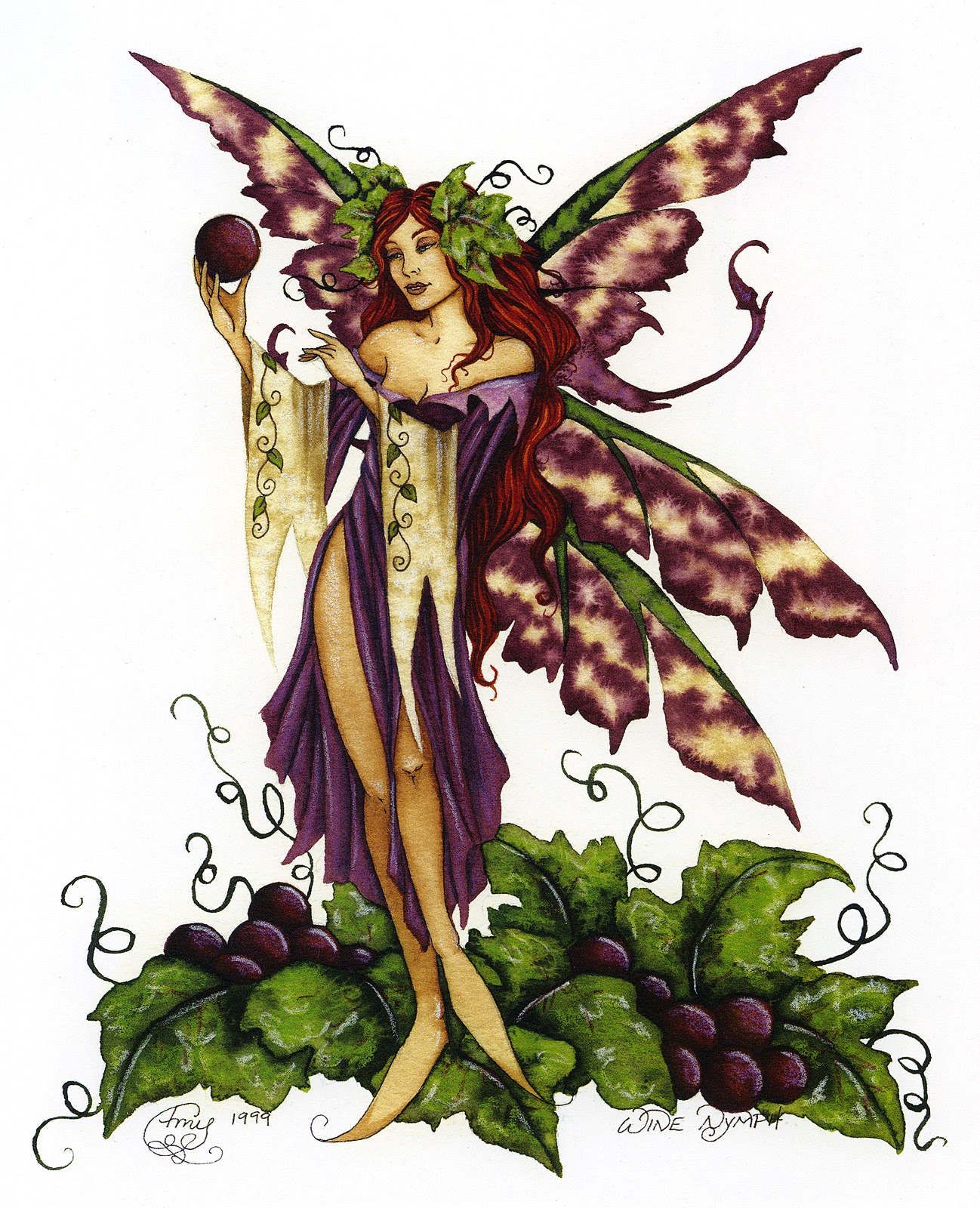 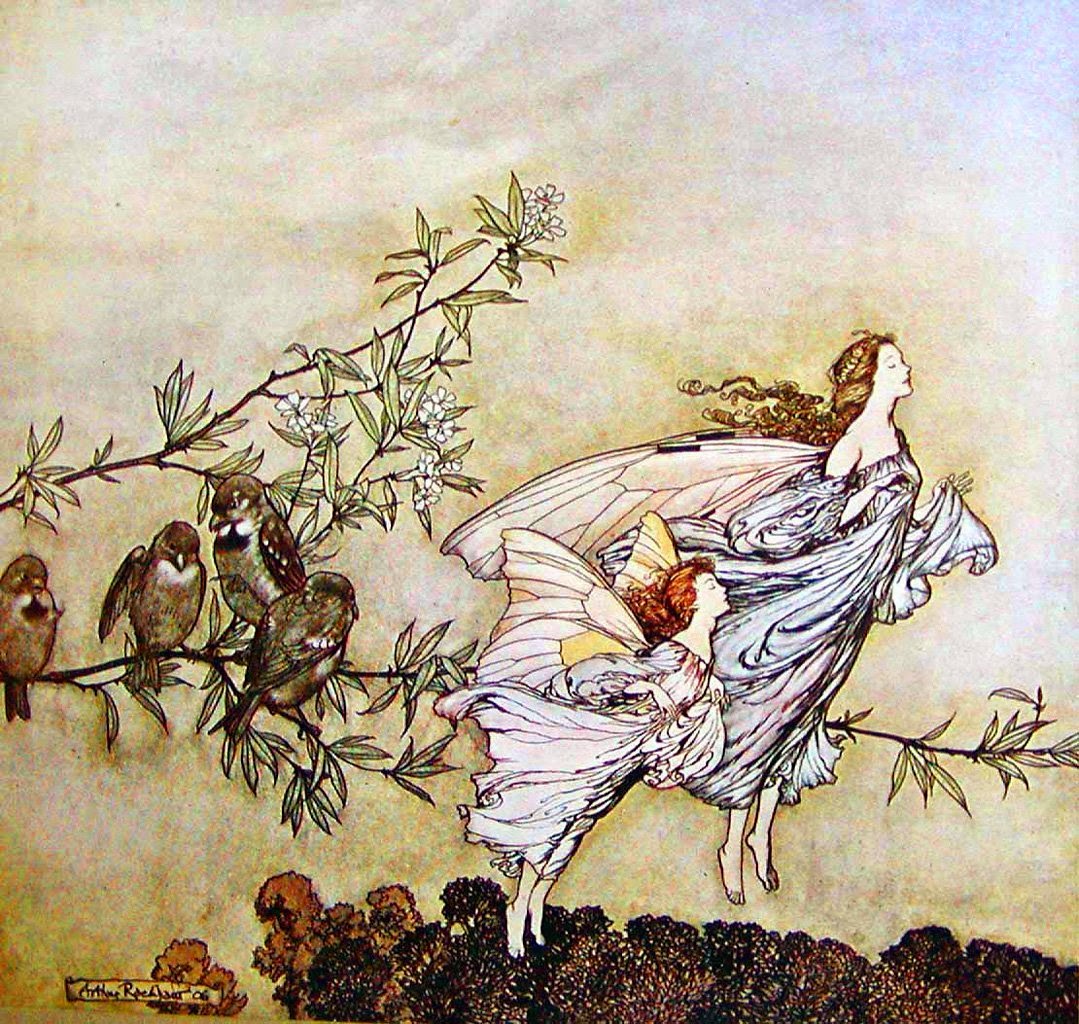 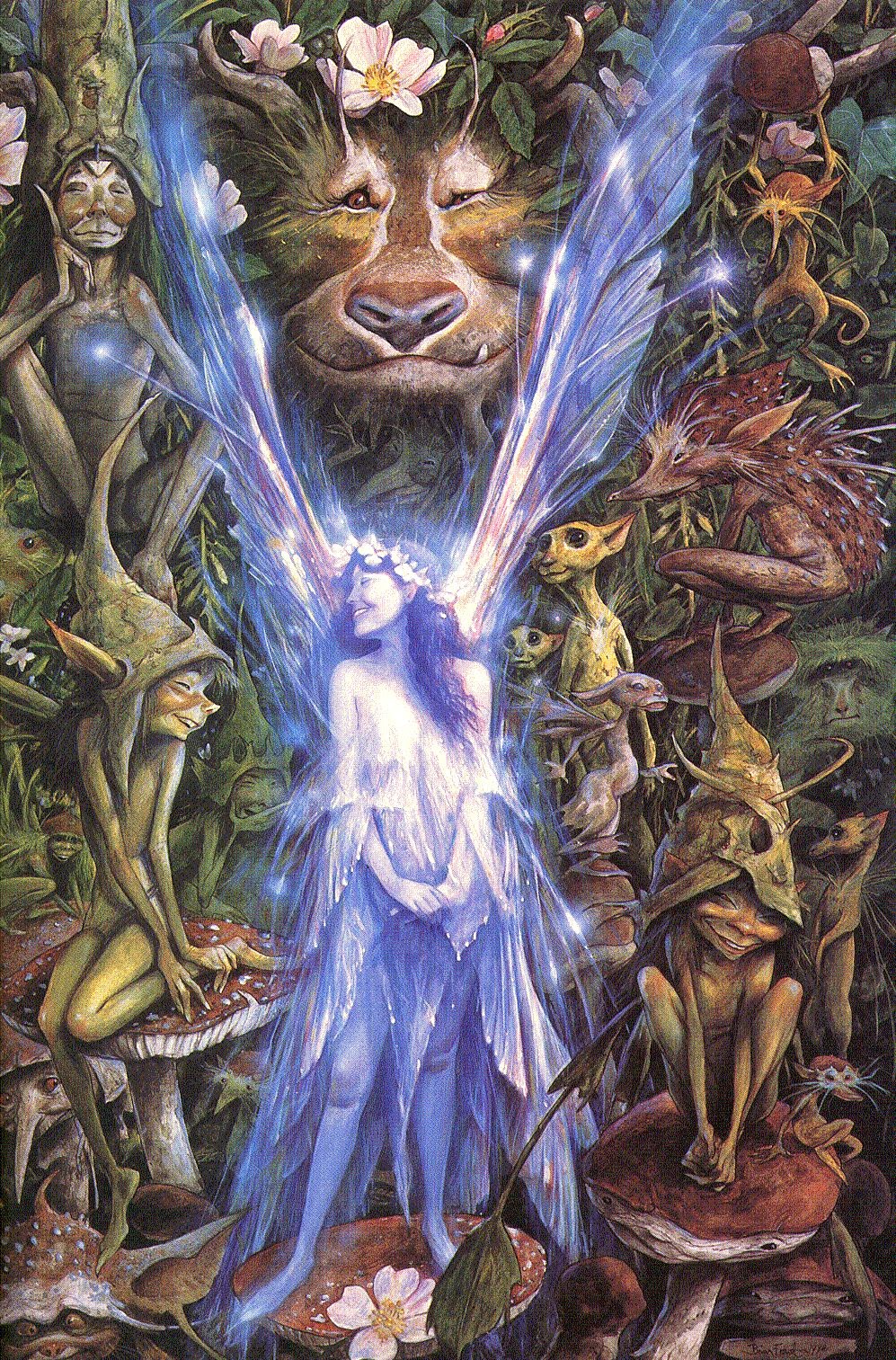 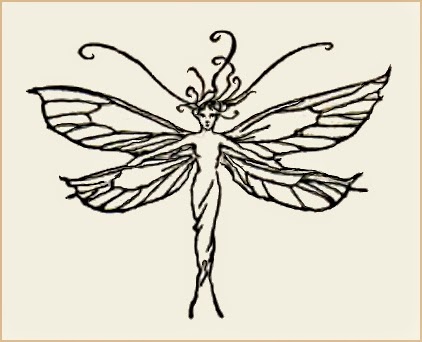 Thank you +Robin Zink, +Jeff Russell, and +Noah Stevens for pointing me towards better fairy art.