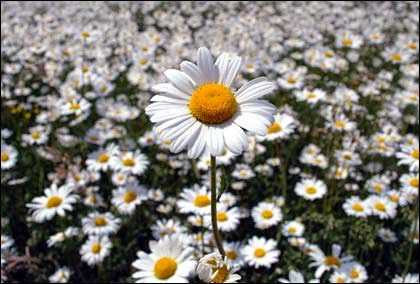 Water daisies don't grow on water.  They grow on soil, in tightly knit patches, as dense as clovers.  The flowers are small white asters that bloom in the spring.  They are assumed to be related to flying flechettia (PDF, page 14).  They can sometimes cover entire meadows.

These flowers have a magical defense.  When one of the flowers is damaged, it turns the ground around it into water.  Or to be more precise, it turns the dirt into dirt with the consistency of water.  And then it releases an alarm pheromone that induces its neighbors to do the same.

And 1d3 rounds later, it reverts the dirt to its normal consistency.  After a few minutes have passed, they will repeat this as necessary.

They are sometimes grown by alchemists, who can turn them into stone to mud potions. 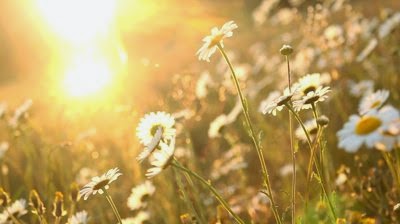 An example (because at least some of my readers will not be immediately terrified of flowers whose only power is making dirt soft): Soldiers are marching across a field of tiny white flowers, trampling them under their hobnails.  In the rear, one of the soldiers cries for help.  Her companions turn and witness her flailing in the ground, bobbing in the solid earth like it was a muddy pool, her arms splashing up flowers and dry dirt.

A couple of the soldiers stop to chuckle; most of them move to help her.  She must have stepped into a patch of quicksand, or a pothole that the flowers grew over (even though most of them marched over that exact spot moments ago).  There is a faint herbal smell in the air, like unripe citrus.

And then all the soldiers are in the ground, thrashing around and shouting.  Their armor pulls them down, and it is a struggle to keep their heads above ground, exactly as if they had fallen off a boat.  They spit the dust off their lips.  It flies like dirt but splashes like water.

A few seconds later, the dirt solidifies around them like batter.  Most of them are trapped, with only their head above the ground, and perhaps half an arm.  Some of them work themselves free.  It is difficult--very difficult--to get their legs free.  Their boots are like anchors embedded in the soil.

The ones who have freed themselves help their friends, the ones who were unfortunate enough to have both of their arms buried, but there aren't enough of them.  Where are the rest?  Were they under the soil when it hardened?  Is it their imagination, or can they really hear the muffled screams of their companions under their feet?

A minute later, most of their soldiers have been pulled out of the ground like terrified carrots.  The wagon is completely sunk, except for the roof, which sits a hands length above the flowers.  A dozen soldiers are huddled atop it, shoving each other to make room.

Random encounter #1: A wagon, buried halfway in a field of flowers.  The sun shines off its polished, wooden roof.  It looks new.  Inside the wagon are supplies for a group of soldiers: a few spare weapons, bottles of brandy, and crates of mouldering grain.

Random encounter #2: A group of grim faced soldiers on the march.  Wagons carry a quartet of canoes.  If asked what they are doing, they will respond: "We are going to dig up our friends, so that we can give them a proper burial."  At the end of the column, a wagon loaded down with a hundred barrels of flammable oil. 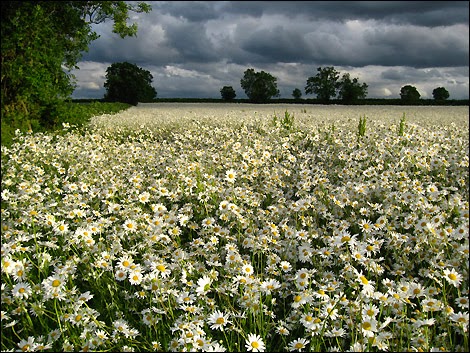 Daisy sharks are predators that have adapted to exploit the water daisy's unique power.  They are not sharks, but are related to mosquito larva.  (They have no winged stage of adulthood.  They are neotenous, like axolotls.  In case you were curious.)

The dirt is liquid around them, and a small area in front of their noses.  Every where else, the ground is as solid as ever.  Convergent evolution has made them fusiform.  If you ever manage to excavate a daisy shark corpse from the ground, you will find that it looks like a maggot that grew into the shape of a shark (although the fins aren't all in the same places).

Stats as sharks (HD 4, 1d3 appearing) with the following ability:

Daisyphasing:  All dirt within 1' of the daisy shark, and in a zone 5' in front of it, has the consistency of water.  In practical terms, the target of its attack treats the ground as if it were water (as the water daisy ability).  This ability ends when the daisy shark is dead, or when it stops attacking you.

Although they are certainly capable of it, they are too stupid to drag people underground and eat them at their leisure.  Usually.

Random Encounters: Just use the random encounters for water daisies but add sharks. 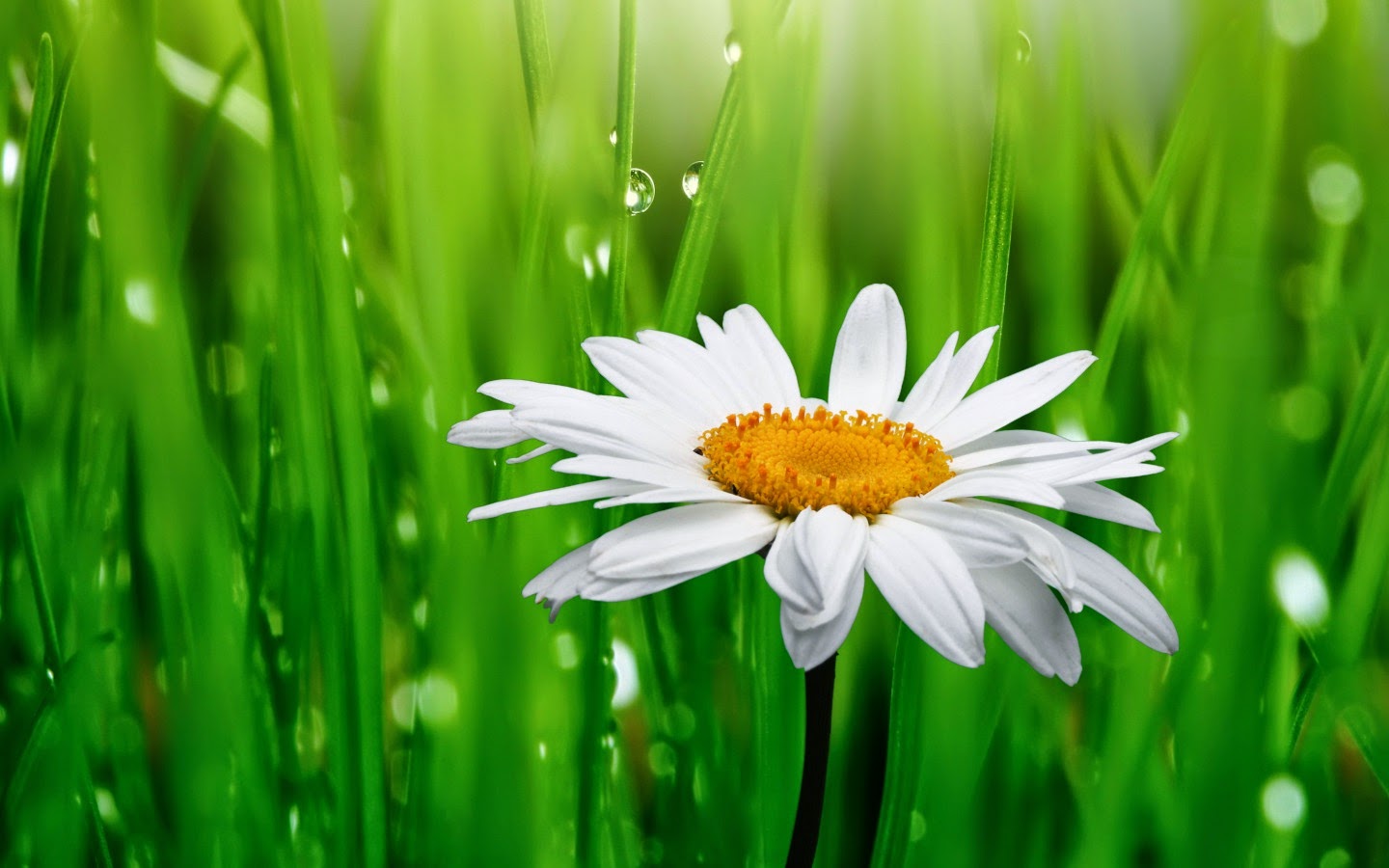 It's been a long time since I thought about the Land of Flowers, but I guess there might be water daisies there.

The only things that survive there are flowers and butterflies, which limits the encounter options, but then again, encounters aren't the point of the Land of Flowers.  The island is supposed to be almost heavenly in its safety and monotony (at least on the surface, during the day). 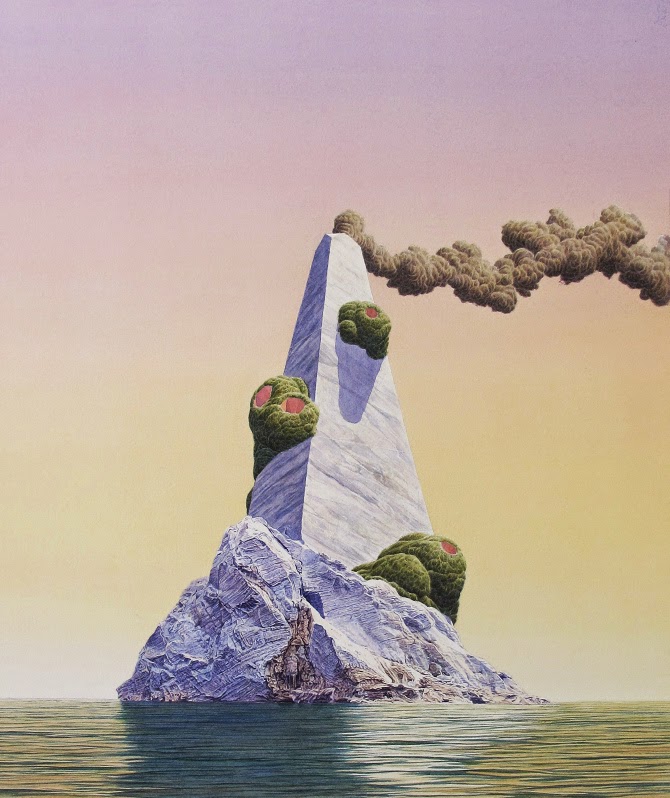 This post is inspired by a game of Into the Odd I just played with +Chris McDowall.  Thanks for the fun game, Chris.
Posted by Arnold K at 5:18 PM