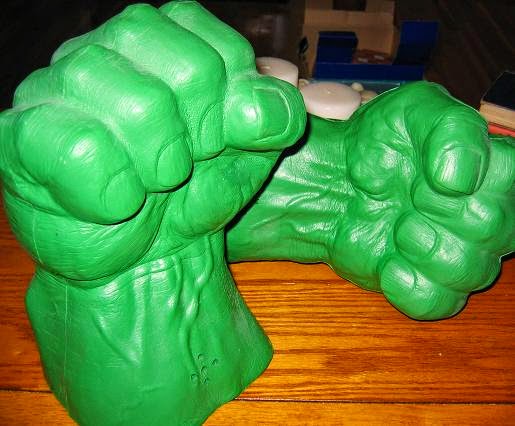 This is the severed hand of Ungus the Mountain, a great troll of great size and ill repute.  It has been affixed to a 6' metal pole.  It can be wielded like a magic 2H warhammer.  It looks like one of those Incredible Hulk toy hands.  It wears a simple-but-large gold ring (worth 100g).  The Trollhammer will resist the ring's removal, and if it is ever truly taken from the hand, it will attack and must be beaten into submission (treat as 3HD creature).

- It cannot be used to deal damage to anything that is, or is holding, fire or acid.  It shies away.
- Drinking green blood from the hand will allow you to heal rapidly.  Over the next hour, you will heal as if you had rested for a full night.  However, you will also need to eat 3 days worth of rations during that time or suffer starvation as normal.
- The hand responds to several commands.  "näve" = fist, and while the hand is making a fist, it can be used as a warhammer.  "grepp" = grab.  "krossa" = crush.  "öppet" = open.  It has the strength of a normal troll.
- If the Trollhammer is ever dropped or left unattended, it will try to scurry away.  However, if the wielder has been killing dwarves, the trollhammer is content to remain.

It's pretty obvious that this is a goblin weapon.  This is used to cut down the huge, spongy mushrooms that clot the sub-verdant byways of the deepest cryptocologies.

This is a two-person weapon.  It takes two people to use it properly, and it counts as a 2-handed weapon for each of them (it's sort of a 4-handed weapon, y'see).  One person swings the front part, and the other turns the crank.  When fighting, it goes on the slower initiative count of the two wielders.

- On a natural 1, it deals 1d6 damage to you (in addition to normal fumble fuckery).
- It does 2d8 damage on a hit.
- The person in front contributes their Str and attack bonuses to the attack roll.  The person in back contributes their Str and other bonuses (if applicable) to the damage roll.
- Extra damage "rolls over" to an adjacent enemy.  So if you deal 9 damage to a creature with 5 HP, you can make another attack roll against another adjacent enemy which will deal 4 damage on a hit, with it's own chance to roll over. 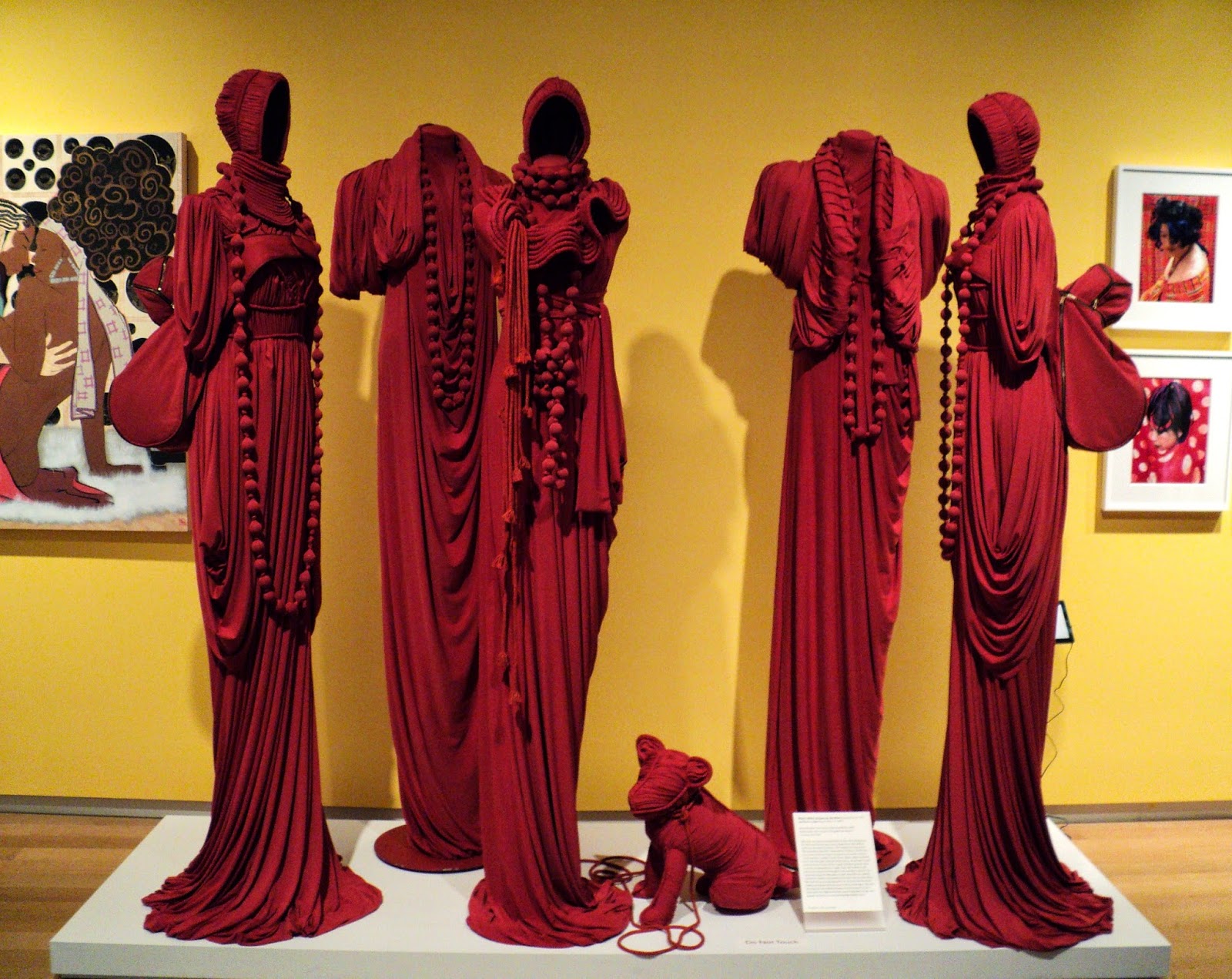 The Silken Sleeves of Slaughter

This is a silk robe, dyed blood red.  The sleeves are extremely long, and hang past the hands, down to the knees.  The outside is plain, but the inside reveals a subtle motif woven with orange threads: a nightingale swallowing a fox.  Small, jingly bells hang from the hem.

- The wearer falls no more than 60' per round (slow enough to negate fall damage) and can glide 3x as far horizontally as they fell vertically.
- Whenever the wearer takes piercing or slashing damage, they take an additional 1 damage as the robe drinks their blood.
- The wearer can attack as if with a whip, with a 15' range.
- The wearer can attack as if with a scimitar, with normal melee range.
- The wearer can yank unattended items into their hands from 15' away.
- The wearer can grab an attended item (such as a wielded sword) from up to 15' away with a successful attack roll.  Although the sleeves are not strong enough to fully disarm the person, they can hold the sword arm immobile until someone cuts the sleeve (automatic) or lets go of the weapon.
- Cut sleeves regenerate immediately.
- The wearer cannot wield other items in their hands.  If the sleeves are bound around the biceps or something, they stop being magical.

These arrows have a blue spiral painted along their length.  Once fired from a bow, they transform into full size ballista bolts.  Velocity is conserved.  This doesn't increase the range or accuracy.

This is a set of six white, ceramic daggers.  They don't look like daggers because they have rectangular blades, but their enchantment allows them to work perfectly effectively despite their weird shape.  The handles are made from yellow bone, and in the pommel of each is a single rune letter.  It is said that there are thirty Hungry Teeth in all, and if they are ever all assembled together, the rune letters will spell out his secret name.  At night, the daggers can be heard rustling and clinking, all by themselves.

It's sort of a conical rock, well-suited to fit in the hand as a small club.  The top has been daubed in ochre, and a few balls of dark stone are embedded in the surface, like peas floating to the surface of porridge.  It's possible to glance at it and not realize that it's a weapon.  Treat it as a club.

- As long as the wielder is not wearing, wielding, or carrying anything else, the wielder gets +5 HP, +1 to hit, +1 to damage, and +1 to saves.
- Whenever the wielder attacks something dumber (lower Int), the attack is made at +2 to hit and +2 damage.
- Whenever the First Weapon gets a critical hit, the wielder forgets all written language and most spoken language for 1d4 days.  They can only speak in monosyllabic words (probably quite haltingly).  Multiple effects of this penalty might cause the wielder to become permanently regressed, at the DM's option. 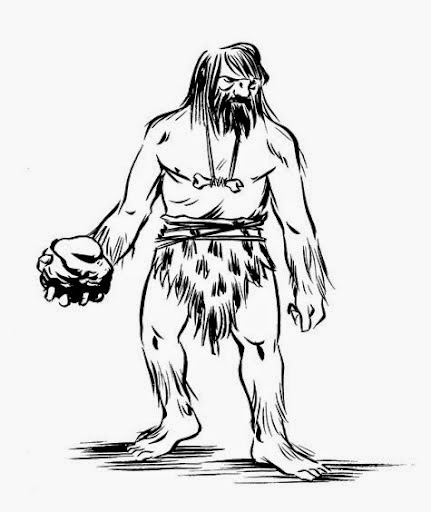 This is a small rock, about half the size of a fist.  It has a few balls of darker stone embedded in the surface and a ring of ochre has been drawn around it's circumference.  It's possible to glance at it and not realize that it's a weapon.

- Don't bother making an attack roll when you throw it.  It never misses.
- It does 1d6 + Str damage, which is pretty damn good for a rock.

Email ThisBlogThis!Share to TwitterShare to FacebookShare to Pinterest
Labels: weapons