Ogre mages are kind of awkward.

I supposed they're based on Japanese oni?  Eh.  They seem a bit like a generic boss version of ogre.  (If you want to make a boss version of a monster, just give it more HD and spellcasting ability and/or make it smarter and/or a funny color).


Gengrigar are tall.  Maybe 9' tall, and almost as broad.  They don't have shoulders, but their arms just sort of slope around their round body.  Their faces look flat and dead but full of teeth, like a drowned shark.  Behind that toothsome smile is a blunted face and a series of blunt cranial spikes that pass for hair.  Their skin is dusky purple and feels impossibly soft and unctuous, like the softest leather.  Their skin smells like baby skin.

Their body is soft and warm, like an egg cell.  It is not made of fat, but rather something softer and more pleasant.  It is dusky and enveloping.  Not matter what it does, it will always be hugging you back.  It's corpse would make a wonderful bed.

They reproduce by splitting in half.

The softness nearly weightless.  Lighter than marshmallows and whipped cream.  The whole creature weighs less than a man.  Perhaps that is why they fly around so easily.

They dress in fine silks, but when these things become sullied with blood and feces they do not notice.  The finery is not replaced when it gets dirty; it is replaced as soon as the Gengrimar finds some silks that catch its fancy.  Most of them carry a cane or a walking stick.

They are utterly amoral and care only for their own pleasures (usually food and amusement).  They lie constantly and unthinkingly.  If you catch them in a lie (and you will; they are careless) they will not blink an eye.  They will pile up more lies on top of the failed one.  Higher lies and deeper.  But they will stop listening to you as soon as you become annoying or boring.

They don't care what you have to say.  Very few things concern them.

You might think they they just walk around the place, stealing things and eating people.  And you'd be halfway right.  They do that sometimes.  But when they do stuff like that, they tend to attract the wrong kind of attention, and then there are suddenly large groups of armed people trying to kill them, and then they have to fly away to somewhere else.  And that's inconvenient.  They've found better ways to live a good life.

Better Way #1: Fly your fat self into town.  Charm everyone.  Sleep in the mayor's bed.  Have them bring you their finest meats and cheeses.  Take all the attractive women in the town of marriageable age and stack them on top of yourself.  Occasionally help the town out with their small problems, so they can justify their actions to themselves (otherwise charm breaks).  Leave when the food runs out or when you get bored.

Have I mentioned that Gengrigar eat a lot?

Better Way #2:  Wander the highways, searching for diversion.  When you get hungry, charm some passing farmer and buy his leg off of him.

Better Way #2.5: Fly around, asking riddles.  Some of these riddles don't have any answer.  If they are given the wrong answer, they eat your leg.  The right answer earns money, if they care long enough to pay it out.  They might just sigh and fly away.

Have I mentioned that Gengrigar carry a lot of money?  Sometimes in a big sack on their back.

In a way, Gengrigar are bigger murderhobos than the PCs are.  They just wander around, killing mostly indiscriminately, humiliating powerful opponents, and carrying an unwieldy amount of treasure.

http://youtu.be/mrdKi1wOb4A?t=2m36s
This is a video of Mad Pierrot from Cowboy Bebop.
It demonstrates how a Gengrigar floats around the battlefield.

Gengrigar are also playful and cheerful.  Nothing gets them depressed.  If you stab one, he'll laugh and mock you, even up to the point of death.

There is nothing that Gengrigar hate more than self-righteous do-gooders.  It's anathema to them.  Sober, grim goodness is the opposite of their careless, whimsical evil.  They reward kindness with cruelty.  Sympathy with scorn.  They are insane, as far as humans are concerned.

They sometimes travel the countryside, transforming animals into all sorts of disgusting, dangerous, or hilarious creations (random chance of each).  They leave a swath of deformed elephants, screaming trees, and carnivorous pink sheep.

Of course, they sometimes set up shop in a more traditional way, and lead a group of ogres/orcs/goblins in pillaging and terrorizing the countryside.  Their playful hedonism continues here as well, and their bases are always ludicrous affairs filled with disgusting, dangerous, or hilarious creations.  Though they live in squalor, they will still use high titles.  A heap of scrap wood becomes "my munificent throne".  A slovenly trull becomes "the imperial concubine, Lady Transfiguration".

Even the ogres that follow a Gengrigar are likely to be transformed into something more appropriate (baby-faces, blue skin, inside-out, etc).

They use their questing curse to put a compulsion on adventurers.  They especially like to get adventurer's to perform inane or pointless quests.  ("Bring me a rat tail from the Citadel of Trials.  Bring me wagon of hydra manure.  Etc.")

One of the most infuriating things that a Gengrigar does is pretend that it is the do-gooder, and that the PCs are the villains.  It uses all the spells at its disposal to persecute the PCs, hopefully while the whole village looks on and cheers the triumph of the Gengrigar.

When they address other people, it's always with names of their own devising.  The fighter becomes "Squire Farmsmell".  The sorceress becomes "Pooplord Wencherly".  It's like they don't see the world when they look at it.  Instead they see something idealized, playful, and contemptible. 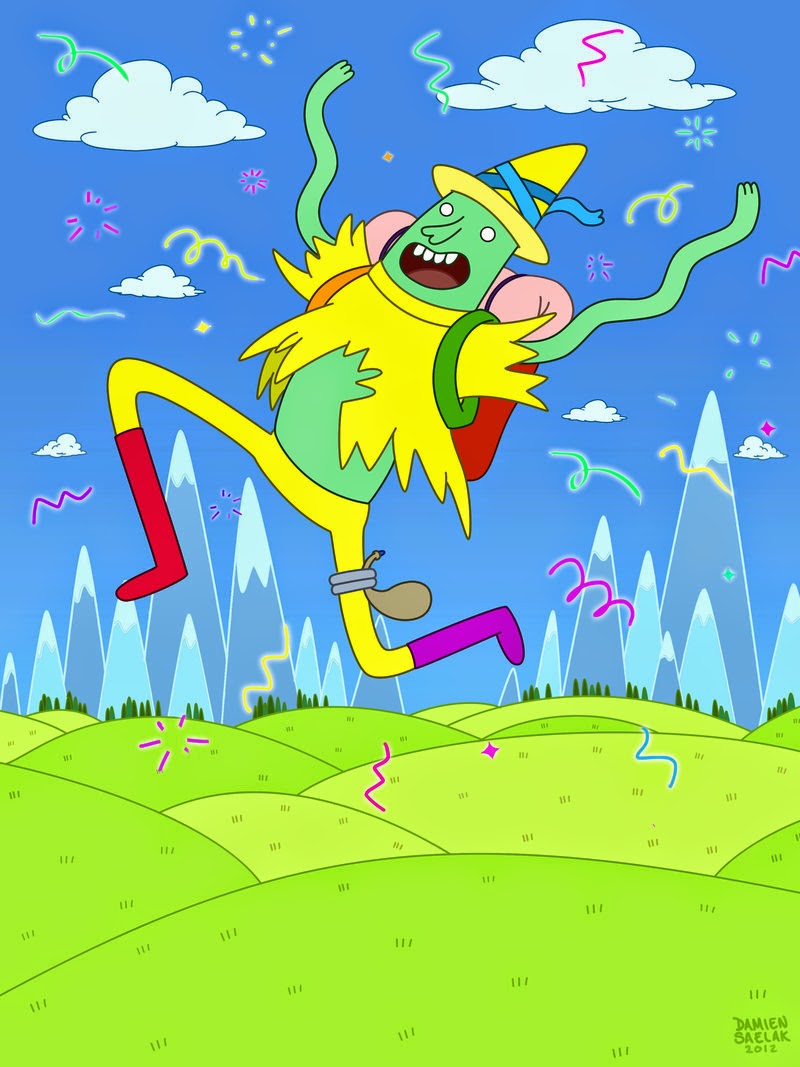 https://www.youtube.com/watch?v=c_8yTbNpESE
This is a video of Magic Man from Adventure Time.
He best embodies the Gengrigar ethos.

Regenerate: 1 hp / round
Squishy: take double damage from piercing
Rich: Gengrigar carry 2x as much money as their stats suggest.
Spells (at-will): charm person*, polymorph self, polymorph other*, minor illusion*, questing curse*
Death Curse: Upon dying, all coins carried by the Gengrigar are converted (or "exchanged") for copper ones.  This usually causes the Gengrigar's coin purses to explode and shoot pennies everywhere.

charm person and polymorph other can only be attempted once per target per day.

minor illusion is a lesser version of phantasmal force.  It's obviously an illusion (too bright, too loud, or too crude), and so can never cause damage or fool anyone.  They mostly use it to make silly things appear in the sky.

questing curse is a lesser version of geas.  It can only be cast on willing people.

They aren't big fans of honest combat.  They're more likely In combat, be sure you abuse polymorph self and minor illusion to create plenty of diversions and hiding places.

In case it wasn't obvious, Gengrigar are pretty much the ultimate trolling device (have you read their death curse?)  They could potentially be a bigger gotcha than a mimic, or a better way to piss off your players than those things that look like ceilings but are really just asshole manta rays.  Trappers?  I guess.

Ideally, introduce the idea of a Gengrigar before you meet one.  Let your players know that these horrible fucking things exist in the world before they walk up and turn someone into a newt.

Let Gengrigar be approachable.  Let them be something that the party can reason with, at least for a little bit.  Make them a little bit more like the Joker and a little less like Bizarro.

If you want them to lead a bunch of bandits and ogres, make them a mad maestro behind the scenes.  And when it comes crashing down around his head, he'll die laughing--unless he just flies away.

And if you absolutely must have someone turn someone into a dung-goblin (or a microcephalic hermaphrodite, a dolphin with arms and legs, etc) and then swear not to remove the curse until a certain quest is done, you might as well use a gengrimon instead of a random wizard.  Gengrimon corpses make better beds, at least. 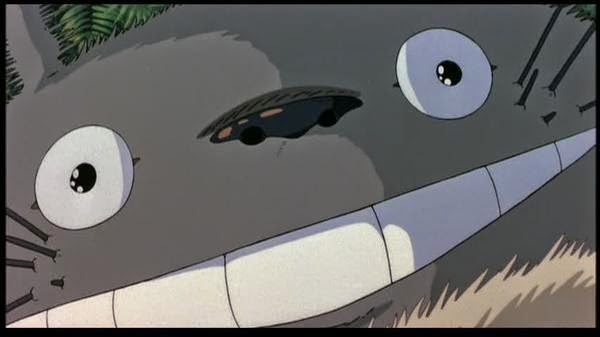 WHY DON'T THEY EVER STOP SMILING