This is a continuation of my previous school of wizardy posts.
http://goblinpunch.blogspot.com/2014/01/more-monastic-wizards.html

A Note About Fashion

I figure that wizards are among the most powerful and visible people in Centerra.  And powerful, visible people often get to set fashion trends, or at least buy clothing directly from the people who do.  Cutting edge fashion trends tend to take a lot more risks than the everyday stuff that is eventually derived.  Combine this with very old traditions and conservative institutions who don't give a fuck about looking modern, and you've got a recipe for outrageous uniforms.

Also, I only talk about wizard fashion because I imagine schools of wizardry being very distinct places.  Adventuring wizards probably wear more practical clothes.  These are just the things wizards wear in cities, when they're representing their college, or when they want to look formal.

Also note that it's only wizarding colleges that have weird fashions.  The more traditional master-apprentice wizards don't do anything so patently ridiculous. 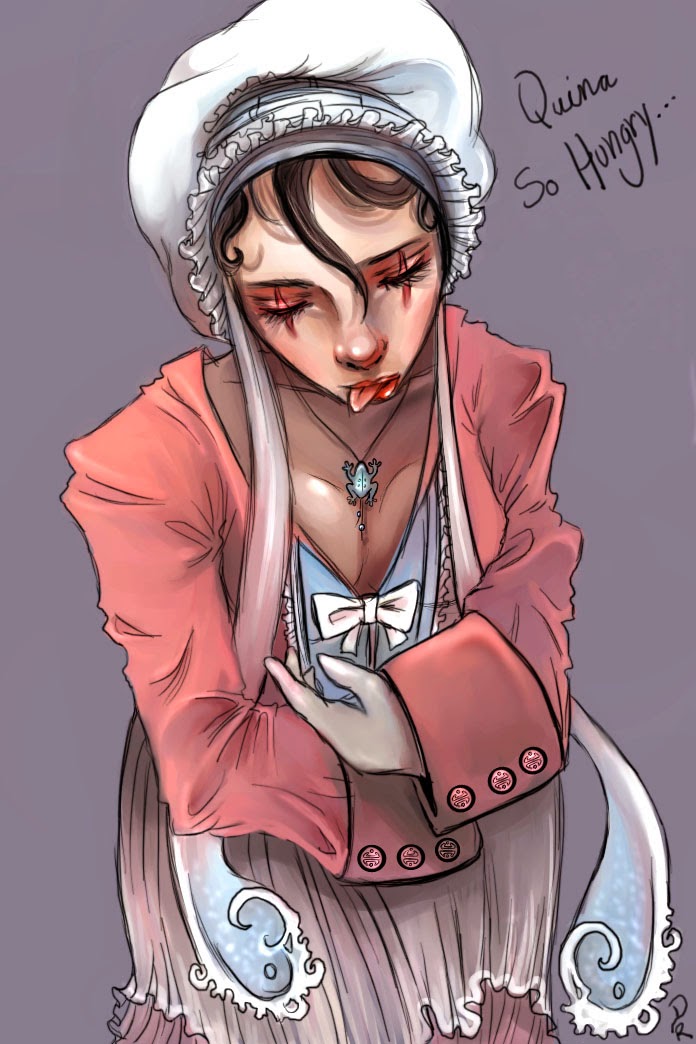 
Lenguamancers are wizards who specialize in the magic of tongues, that most important of organs.

While the Stewer's Guild of Keldyn is best known for making the 100-Year Stew every century or so, the real backbone of the Guild are the Lenguamancers.  While the preparation and presentation of the 100-Year Stew is vitally important for obvious reasons, the decades between Stews give the Guild little influence in the world--except, of course, for the lenguamancers.

It is important to note that the Lenguamancers are a distinct group from the Alchemist-Cooks.  While some talented individuals master both arts, the two groups are better known  as rivals.

Lenguamancers train in the College of the Purple Dome, in the city of Trystero.

The lenguamancers grew out of a mystery cult, although those roots are barely visible now.  They believe that the tongue is the seat of the mind, and indeed the soul.  The tongue both produces sounds that communicate, and it tastes things which perceive the world.  They believe that all senses are variations of taste, but taste, since it is the most primordial sense, is the most reliable.  Your eyes may fail, your ears may deceive you, but the tongue alone is infallible.

Lenguamancers wear robes of white, pink, and red.  Underneath the gowns, they wear a light framework called a hustle* that is designed to make their shoulders look bigger.  They usually eat a palette cleanser in between spells, typically ginger, and typically stored in their left sleeve.

*Similar to how Victorian-era women used a bustle underneath their dress to make their butt look enormous, old Centerran fashion once had men wearing a similar thing for their shoulders: the hustle.  They're now painfully unfashionable, and only worn by certain conservative groups.  The momentum of tradition, I guess.

Lenguamancers have developed alternative ways to record spells in spellbooks, probably due to a small amount of scorn for the written word.  Completely unique in the wizarding universe, some lenguamancers are illiterate.

Observances
- Never allow yourself to be tasted.  Tiny parasites (smaller than a mouse) don't count.
- Depends on the stars.  Every day, roll a d12:

Special Ability: Taste the Unknown
By tasting something, you can ascertain its hidden truths.  By licking a person, you can discover their mood, health, diet, and usually some lifestyle clues.  By licking an item, you gain the effects of detect magic and identify on that item.  You can always detect poison by taste, and usually spit it out fast enough to suffer no ill effects.

Control Tongue lets you take control of a person's tongue for a few turns.  You can't speak through your mouth since you are speaking through the person's mouth (with their voice, naturally).  The other person actually has no control over their voice (although they can clap their hands over their mouth or something).

Mirror Tongue lets you speak any language you choose for a few minutes.  It can be a language that you identify by name ("elvish") or just indicate ("whatever that guy over there is speaking").  This doesn't apply to written languages in any way.

Silence prevents the target from speaking if they fail their save.  It lasts for a few turns or until the caster speaks (whichever occurs first).  Since this spell can be used to silence spellcasters, it is the most feared ability of lenguamancers.

Speak With X lets the caster pose 3 sentences or questions to the target.  Dead or inanimate objects will answer questions honestly, although the answers tend to be strange and cryptic, since the temporary minds that the spell gives the object tend to be alien, stupid, or both.  Architectural elements (wall, door, floor) can answer simple questions ("is there a secret passage in you?" "what's on the other side of you?") but have hard time with specifics, such as how the secret passage is opened or what kind of creatures are on the other side.  Speak with enchantment also works with curses, who are known to be insulting and vile in personality.

Closing Thoughts
In the games I've played, the speak with X spells are always hella fun.  It's a lot more interesting to talk to a wall about what's behind it than it is to just cast a divination spell that lets you see through walls, and you get to discover what kind of personality a hamster has when you talk to it.  Fun.

The observances are potentially pretty damning, since you lose a prepared spell whenever an enemy bites you AND you probably need to carry 5 types of rations (or carry different kinds on different allies) which requires tracking rations by type (pain in the ass) . . . but maybe that's appropriate for a wizard who works with a culinary institution like the Stewer's Guild.

And being able to cast identify by licking something is also a powerful ability.  It might even be worth the onerous observances.

And if you don't like the whole special ability / observance thing, you can always just drop it and use the spell list.
Posted by Arnold K at 4:41 PM