Encounters on the Sea of Suloi

So my Centerra setting is pretty much just South America.  There's a big continent that stretches from sunbaked wasteland in the north to frozen wasteland in the south.  And there's an ocean on each side.

And since I'm currently working on a hex crawl centered around the Frogstar Peninsula (i.e. this place). . . 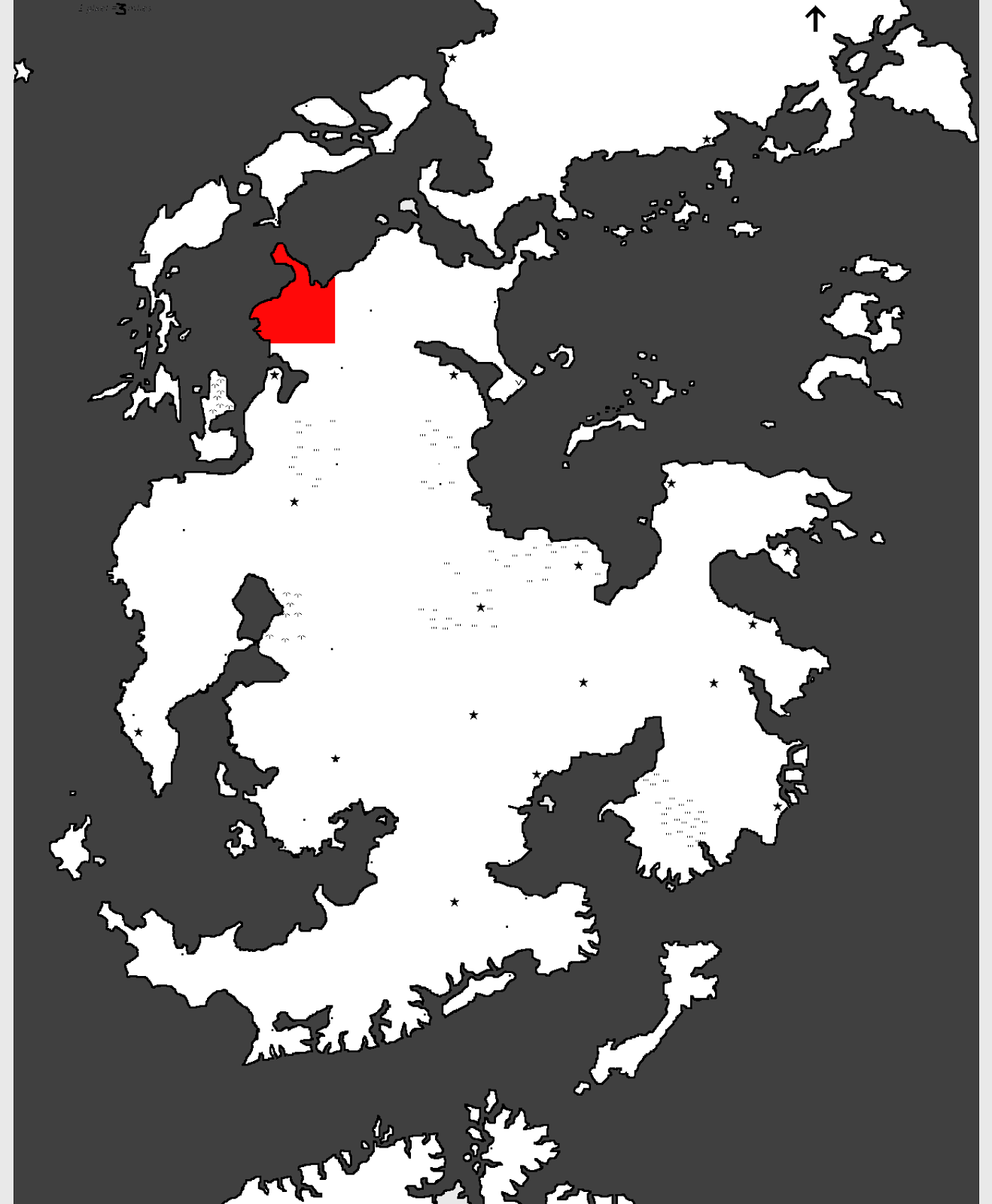 I figure I should do some more write-ups about the Sea of Suloi (i.e. this place).

The Prismatic Waters are called that because they change colors.  Like, without warning, the whole ocean will suddenly change colors from Pantone 15-5217 to 17-5641.  It happens in an eyeblink.  If you're at sea and watching the horizon, you can see it sweep across the ocean like a shockwave.  The colors don't seem to do anything, but some of them herald certain ocean-wide effects.  Every sailors most feared color is this one.  They won't even name it out loud.  It is literally the worst luck.  It's a baseless superstition everywhere else except the Prismatic Sea, where it really does herald Bad Things.
Wizards think that the color changes occur because of a massive, enchanted prism prison beneath the waves that holds a rainbow elemental.  Different colors correspond to different emotions, and these emotional releases affect the outside world.  (Purple, of course, represents fear.)  But then again, wizards are idiots.  Scholars believe that this is the result of tiny organisms in the water (bacteria?  viruses?  abiotic prions?) that are attuned and reacting to some external stimuli.

The Arcade was named thus because it sometimes has a lot of columns.  The columns are waterspouts.  Ocean tornadoes.  They happen all the time in the Arcade, and no one knows why.

But not only are the waterspouts constant, they're also weird.  They form during storms as often as they form during clear weather.  The form rows.  They form pairs that spiral around each other like DNA.  They form arches, and funnel the water from one part of the ocean to another.  The arches look like rainbows; you can sail safely beneath them.  (It is said to be good luck.)

Of course this also makes the Arcade incredibly dangerous for ships.  Most boats go around it.  Even the merfolk, with their mostly-submerged boats, still risk getting their sails torn off by waterspouts.

And of course the ecology of the place is all jacked up, too.  Enormous flying things filter the filter the plankton out of the air (which is constantly filled with plankton-containing mist).  There is a species of large dolphin that rides the waterspouts for fun.  But most animals have a hard time surviving in this place.  Near the boundaries of the Arcade, it is not uncommon to witness a rain of anchovies, kelp, or tiny squid.

And strange things happen in the middle of the Sea of Suloi, too.

The Sea of Suloi is a remarkably shallow sea.  Between a major river (the mighty Shunatula) emptying into it and massive algae blooms, there is a lot of biomass drifting to to the bottom of the ocean.  The sludgey, sandy bottom is a vibrant ecosystem (and not truly comparable to anything we have on Earth).

Biology Digression: There is a type of colonial yeast that grows in the nutrient-rich sludge on the ocean floor.  These yeast-colonies grow over the course of decades and resemble oversized sponge-corals.  These yeast-colonies are eaten by a species of giant sea cucumber which burrows holes through the yeast-coral, forming a tunnel system.  These tunnel systems form their own microecosystems, and are home to all sorts of specialized animals.  These creatures produce a large amount of gaseous waste, which eventually infuses into the yeast-coral to such a degrees that the whole thing becomes bouyant.

No one in Centerra has any notion about anything in the previous paragraph, however.  I only mention it to you, dear reader, so that the next paragraph will make sense.

Every so often in the Sea of Suloi, a giant island of spongy mud will explode to the surface in the middle of the ocean.  These sponge islands, called cucumber baskets, spongetunnels, kingmuds, or brinestacks, are hundreds of feet across and full of tunnels.  These tunnels are full of lots of animals, but they are also full of giant sea cucumbers, a fantastic delicacy--the dish of kings.  A dried giant sea cucumber is worth its weight in gold.

And so everyone is thrilled when one of the sponge islands erupts to the surface.  Although the air around a sponge island is dangerous immediately after it surfaces, people will flock to the site because such great treasures can be found inside of it.  There are specialized ships and crews that search out these floating islands and make good profit by doing to, even though their appearance is mostly random.

And they are quite dangerous places.  The giant sea cucumbers can defend themselves by shooting sticky, acidic intestines from their anuses (google it) but they are not the most dangerous of the sublittoral organisms that live there.  And there are environmental dangers, too.  Drowning, "bad air", becoming trapped in a smaller tunnel, and--the biggest danger--that the whole island might flip over.

But it's not only the specialists who venture into these death traps.  Merchant galleons, whalers, passenger ships, pilgrimage barges, poet joyjiggers--nearly all ships will stop and investigate one of these things, simply because a giant sea cucumber is worth a small fortune.

Side note: despite the fact that the merfolk are the hated enemies of all land-dwellers (and vice versa), giant sea cucumbers are the merfolk's greatest export.  Merfolk smugglers and human smugglers do profitable business with each, and have shared many a glass of wine as they grow rich together.  Both groups are hated by their respective species as traitors.  (The merfolks' biggest import is tinplated steel.)

Physics Digression: The solubility of a gas in a liquid is (roughly) proportionate to the pressure.  So when the pressure drops, previously dissolved gases will appear as bubbles (like opening a soda can).  This is true for yeast-coral-islands that rise to the surface.  As they rise, they become more bouyant, not less. Their eruption from the surface of the water is a violent, dramatic process.  The waves capsize small boats, the ocean turns brown with mud, and black crabs rain from the air.


So if Centerra is analogous to South America, there is also cheap Panama Canal knockoff (although it's really more like the Sea of Marmara).  Go back to that close up picture near the top (#3) and you can see where the Sea of Suloi meets the Sea of Fish.  It's a pair of small oceans: the Valdine Sea and the Queen's Sea.

Like the Panama Canal, all ship traffic that wants to go from one ocean to the other must pass through there.  These two small seas are ruled by merfolk--it's probably their biggest stronghold.  (They even have some land-based colonies, like Valdina).  And since merfolk generally hate humans*, very little traffic gets through.

*Merfolk have weird ideas about identity.  They hate humans on the institutional, conceptual level, but are much friendlier to lone humans.  This friendliness sometimes extends to small groups.  Sometimes.

The only people who get through the Valdine sea are the friends of the merfolk, and that's a very short list.  The weirdos from Valdina get free passage, but there aren't many of them, so whatever.  Most of the ship's you'll see there are pirate ships and smugglers that have managed to get into the good favor of the merfolk.

Interestingly, the Valdine and Queen's Seas have currents.  In the winter, the ocean pours from east to west, draining the Sea of Fish into the Sea of Suloi.  Millions of gallons of water per day.  It's impossible to sail against the current.  And in the summer, the inverse occurs.  Because of this, the Valdine and Queen's sea are only bidirectionally navigable about 70% of the year.

No one has any idea why the seas do this.


the first 25 seconds of this video are useless and annoying
but you get to see a sea cucumber poop later on, so there is that