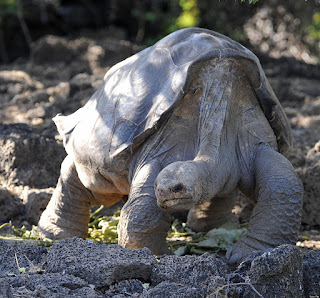 *Imperfect Time Stop: When the tortoise uses this ability, the flow of time within 200' of the tortoise slows to a crawl (1/100th normal speed), no save. Obviously, combat is impossible when you are fighting at 1% normal speed.  Even a tortoise will sidestep your arrows.  The only thing that isn't affected by this is perception and thought: your thinking and senses are not slowed.

However, with enough willpower, a creature can break free from this effect and act normally.  They make this decision at the start of their turn, and if they choose to take their turn normally, they take 1d6 paradox damage if they move from their location, and 1d4 paradox damage if they take an action.  A character can take both types of damage; for example, if they both move and swing a sword.

This damage is reduced by 1 point for each turn you spend waiting (minimum 0 damage), and therefor reducing your temporal pressure.  A character that waits for 3 turns before acting takes 1d6-3 damage from moving and 1d4-3 damage from taking an action.

The tortoises can eat time stopped meat just fine.  They trundle up to you and start eating your leg while all you can do is watch.  And since you are mechanically helpless, the tortoise automatically hits for maximum damage.  If they could somehow reach your neck, they could coup-de-grace you.  They can reach the necks of halflings.  A creature can defend themselves from a tortoise bite as a reaction, but it follows the same rules as taking an action: you take 1d4 paradox damage, reduced by 1 point for each turn you've waited.

Time tortoises are vegetarians, and do not swallow any meat that they bite off (in triangular chunks).

A Note About Paradox Damage

Paradox damage looks like thousands of wounds opening and closing on you as various potential futures collide and collapse into a stable waveform of possibility.  Sort of like a strobe light of gore.  You actually die and resurrect several hundred times in a turn when you suffer paradox damage.  It's very painful, but it's also very instantaneous.  It doesn't feel like pain as much as it feels like the memory of pain.

A character that dies of paradox damage dies as normal, but later on the party is attacked by a time-fucked version of that character as soon as it is impossible for that too happen.  For example, after the wizard dies from paradox damage and the party returns to their horses, one of the horses turns into an alternate reality-version of the wizard with three eyes and a crab claw, and then attacks them.  Or the barbarian bursts from the chest that the rogue was attempting to open, and begins biting him with his snake fingers.

Yes, this is just a weird mini-game layered on top of the combat system.  I like it.

I also like mechanics that give the players a choice: is it better to stand still or take damage?  More interesting than just giving time stop to some shitty turtle monster.  (Although I like that idea, too, for different reasons.)

Will it result in slow, slow gameplay as players spend all of their turns saying "I wait"?  Hopefully not, since the time-consuming part of a turn is thinking (and rolling), and the decision making happens once ("I should wait for 3 turns") and then people get into the groove of quickly waiting while the tortoises totter around munching on kneecaps.
Posted by Arnold K at 11:38 AM