They call it the Wilds, but they also call it Oberfel's Folly.  It is their way of blaming him for what the forest has become.  In Oberfel's day, it was wild and dark and tortuous, but since his death it has only grown darker, and the sunlight that reaches the dead leaf floor is little, or none.

There was no concept of ecology, then.  People didn't know that a species could be made extinct.  There was just a desperate king--he was not unjust or ignorant, but he behaved as if he were when the cancer began to gnaw at his heart.  Why else would a man organize the Unicorn Hunts?

Years later, when the charnel yards were excavated, the unicorn bones were gone. 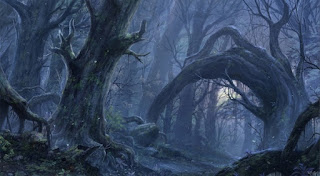 The Wild Clans and their Druids

There are clans of wild people there, who dwell in the leaf and the loam.  They have no art, except the black beetles that grace their brows.  They have no history, except the brown bones they scatter in the rocky stream beds.   They have a language that they despise, and speak it only in dire situations.

They eat their dead, and sleep inside dead logs.  Their teeth become stained black from the insects that they eat.

This is probably not true.

It is also said that the forest itself hides them, so that they can move through its deadly environs unseen and unharmed.  They bury their babies' souls in the ground, so that it becomes their true home.  The twilight realm between the dirt and the treetops is an uncomfortable half-realm they endure.

This is perhaps true.

DM's Notes: Wild clan people are like berserkers with the following ability.

Mother Earth: If this clansperson dies on the soil of the Wilds, the corpse is immediately swallowed up by the soil, and entombed 10' below.

Wild clan elites have 2 HD and can burrow at 1/4 speed, but only in the top 5' of Dembraava soil.

Wild clan druids are just druids that specialize in entombment and insects.  Oddly enough, they revere the mordanfey, even though the mordanfey are undead. 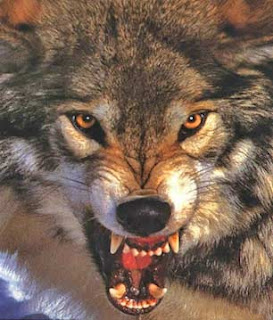 The wild clans of the Wilds sometimes kill wolves and decapitate them.  The wolf heads are then "planted" in an oak tree.  The head continues to live in a strange half-life.  The eyes move and the ears pivot, but they make no other signs of life.  And as the tree grows, so does the head.

The largest oaks in the forest sometimes have dozens of these heads planted in them.  These are usually planted in order to protect the dwelling caves of the wild clans.

And when the head senses a humanoid (not of the clans), it animates.  And that mouldering head, more of a plant than a beast, lunges off the tree and sinks its fangs into the throat of its prey.

One lunge, perhaps two.  Then the head howls and lies still.  The howl is an alarm for the savage tribes.  It tells them that outsiders have come to the forest, with their foul metals and perfumes and written language. 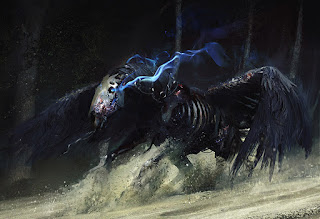 They returned from Oberfel's slaughter as leering, lurching things.  Their black hooves leave wounds that never heal (treat as cursed) and their flanks are covered with ragged flaps of peeling leather.  You can hear the beetles that scrabble across their bones.

Their gaunt heads are always crowned with a broken horn, or a sawed-off stump, or a ragged hole where it was dug from their forehead.

It is said that something of their old nature still resides in them.  Although they are filled with hatred and disgust towards the people of the cities, they are also disgusted with themselves.  As long as they are being watched, they will not attack, except in self-defense.  Instead, they usually watch the combat as their druids and insects do the fighting (swarms live inside each one).  Only after their beetles have blinded an opponent do they move in to kill.

Virgins are treated no differently, except that the undead unicorn will spend days trampling the remains into the dead leaves, crying out the whole time as if in pain. 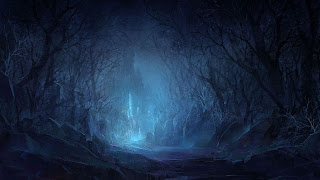