Each type of hair wizard chooses a type of magic to specialize in: beard, (head) hair, mustache, or nosehair.  Magic cares little for gender--a female hair wizard can have a magic mustache if she so desires.

Beard wizards tend to be earthy, affable, and fond of drinking.  The most famous beard wizard of all time was Strumly Brontlegrim, who once wrestled a bear into a barrel while his beard wrestled another.

Hair wizards tend to be attractive, mysterious, and fond of nudity.  Hair wizards are especially fond of towers without ground floor access--many are also accomplished climbers.  The most famous hair wizard was Ethria Casmontiya, who became the first lich-wig.

Hair wizards can extend their hair into a 50' rope, or retract it with the same amount of effort (it requires an action).  At level 3, their hair can extend to 200' long.

Mustache wizards tend to be ostentatious and obsessed with their own popularity.  This is okay, because most of them actually are popular.  The most famous mustache wizard was Huxward Fabberton, who is now known as the inventor of the magic cigar.

There has only ever been one nosehair wizard.  He was both cruel and petty.  Other hair wizards do not speak of him, except to spit when they hear his name mentioned.

Nosehair wizards can use their nosehairs as a whip. They can only perform one whip action per turn, even though they have two nosehairs (one in each nostril).  At level 3, they become capable of dealing lethal damage. 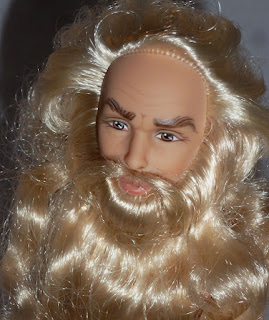 You no longer require a free hand to cast a spell.  Your hair does all the gesticulating for you.

You can change the color and styling of your hair with a minute's concentration.  However, most wizards have a preferred color and style they wear almost exclusively.

If your hair is bound or otherwise restrained, you cannot cast spells.

If your hair is shaved or burnt off, you cannot cast spells until it grows back.  A hair wizard's follicles are of such stalwart puissance that it only takes 1d4+4 days for the hair to grow back to a minimum length.

If you fail a save against fire or acid damage, a significant portion of your hair is singed off, and you lose a prepared spell at random.

Brontlegrim's Grip
Level 4
As evard's black tentacles, except they are flammable, like web.

Casmontiya's Pet
Level 1
You create an animate rope from your hair.  Treat it like a giant snake with 1 HD and no bite attack.  It has a powerful knowledge of ropes, and can obey simple verbal commands.  It dies immediately if it takes any slashing damage, but is immune to bludgeoning.

Control Hair
Level 2
When cast on your own mildly-prehensile hair, your hair grows long and powerful, effectively giving you an extra limb that has a Strength four points higher than your own.  (This doesn't allow you to take any more actions/attacks in a round).  If cast on someone else's hair, it lets you control that hair as if the hair had a Strength of 1.  Save negates.  (This spell is especially debilitating to other hair wizards.)

Hair Doll
Level 3
This spell is cast on a hair doll that you've made entirely out of the hair from a singular creature.  This does three things.  First, holding the hair doll lets you know what direction they are in.  Second, holding the hair doll gives them -4 to save against all of your spells.  And lastly, if the doll is burned, they suffer 1d4 rounds of incapacitating agony and then save vs death.

Hair Growth
Level 2
A creature's hair grows to truly voluminous proportions, about triple the length of what is normally the species maximum.  A shaved hair wizard can use this spell to immediately regain their spellcasting ability.  If cast on an exceptionally hairy creature (yeti, mammoth), the grown hair is so encumbering that they get -2 attack and AC.  A moderately hairy creature (such as a bear) merely gets -1.  Save negates.

This spell can be inverted into depilation, where the target loses all of their hair.  Save negates.

This spell can also be inverted into hair retraction, where exceptionally hairy creatures (yeti, mammoths) must save or die, as their hair burrows into their brain.

Hair Panic
Level 1
The wizard's hair immediately shoots out and grabs something no further than 15' away, similar to a lasso.  This spell can be cast as a reaction (similar to feather fall) and can even be used to prevent a fall as long as there is something to grab nearby.  Treat this as a lasso attempt with a +2 bonus.  If used to pull something toward you, the pull attempt can be made in the same turn as casting.

Loop of Cutting
Level 2
By tying a loop of your hair around something, you can cut it.  Doesn't work on adamantine.

Second Impression
Level 1
Your hair is magnificent.  Reroll a reaction roll, this time with a 2 point bonus. 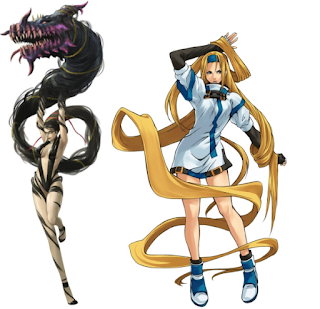 Hair familiars exist.  In most cases, they live in your hair, and resemble birds, mice, spiders, or exotic ornamentation.

In some cases, the hair familiar is the hair.  There are many stories of lads and lasses who returned with magical power once a hirsute symbiote grafted itself to their body.  They work together and communicate telepathically, but the hair familiar is an entirely independent creature.  It has its own goals, and it will leave if it feels it is being neglected.

These are immensely powerful spellcasters that have chosen to immortalize themselves in an undead wig.  These wigs immediately dominate anyone who wears them, and frequently survive the death of their hosts (usually because few realize that the wig is the real monster on the scene).

They have powers similar to a lich's, including a lich's deadly touch.

When threatened, they can lift themselves up and run away like a spider, as fast as a human can run.

This legendary sword +1 is really, really sharp.  On a critical hit, the target's armor is completely ruined if they fail a save.  Against astral or ethereal enemies, the sword counts as a sword +3, since it is capable of attacking and severing their astral cord.  In fact, that's exactly what it was made to do. 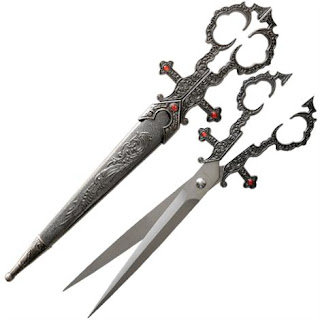 And credit to +Alasdair Cunningham, who wrote an excellent post about magical beards and inspired me to finish this class.