The Breath of Flies (Part 2 of the Dembraava Wilds) 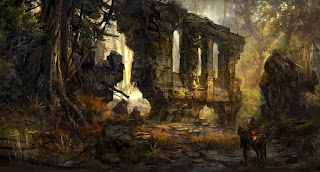 There is a dead city in the middle of the Dembraava Wilds.  The forest killed it.

The city is a labyrinth of tortuous roots and broken stone.  In the century since the city was abandoned, the trees tore it apart.  We humans cannot see the violence--it happens too slowly for us to recoil from the cruel aggression.  But there is pain in the fractured foundations, and although there is no blood on the ground, we can feel the wrath that fell on this place.

Walls have been thrown down.  Stone buildings have been shattered and picked up by wooden claws that will crush them to dust over the next hundred years.  The old maps are worthless.

The forest has fallen on this place with all the violence it can muster.  Druids who see the place for the first time are shocked.  They hate the cities, but this is the equivalent of an elephant trampling a child into a pulp.  It's shocking because it's excessive--the druids don't feel bad for the city, they're just surprised that a forest could get so mad.  Forests have emotions, and the predominant feeling in Dembraava is one of cool, calculating hatred.

It is a difficult job, and many of them die to keep the road open.  They do this so that merchants can continue to grow richer.

But some of them were once rangers of Paladros.  This forest was their ancestors' home, and in some stubborn part of their brain, they still hope to reclaim that city-corpse.

They do not venture far from the road.  Not even when one of their number is captured by the wild clans and flayed alive on some distant tree-top.  Not even when the skins are hung over the road to provoke them.  They are smarter than that.

The Breath of Flies

There are many dangers in the Dembraava Wilds, but one is feared the most because of its subtlety.

It is called the Breath of Flies, because it is believed to be transmitted by the exhalations of carrion diptera.  Others call it Towerbuilder's Madness, and in fact, it is true that some of them do build towers in the middle stages of the disease.

In the earliest stages, it expresses itself as a mild psychosis and a strong desire to be alone.  People become agitated and attack their own party members or--more likely--they simply run off into the forest. (This is a problem if the afflicted person was carrying something essential.)

If the afflicted person ran off near a town or city, the afflicted needs to be found quickly, and their body burned.  If left alive, they could infect the entire town.

In the middle stages, the afflicted person exhibits acrophilia and near-complete dissociation.  They often ramble about "hearing their own voice talking to them" or "opening the secret sun" or their "million bright babies inside them".

They usually climb tall objects at this point.  Trees, towers, cliffs.  They climb them as high as they can, up where the treetop rolls in the wind like a ship at sea.

And once up there--once they are firmly gripping the treetop--they enter the final stage of the disease.

Their arms and legs become rigid, locking them to the treetop.  Tetany arches their backs, tensioning their limbs and throwing their lips into a rictus.  Their eyes turn to the sun and they go blind, being unable to blink.

Many claim that the person dies at this point, but it is not certain. 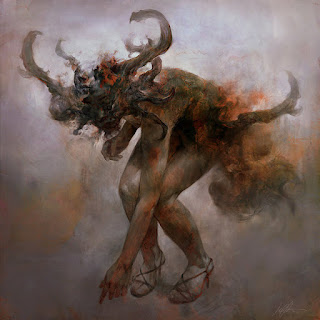 Then the fungus finally makes itself fully known.  Spores begin to billow out from their mouths, released from their incubation in the lungs.

The limbs die, and harden into a resinous material.  In fact, most of the body dies at this point.  It shrivels, dessicates, and hardens into something like leather.  Everything dies except the lungs, which will continue inhaling and exhaling until every last spare calorie in the body is consumed.  (The heart lives on, as well.)

The fungus is capable of stimulating muscles on its own.  Even if the head is removed, or if it rots off, the body will continue to breath.

An entire human being, rendered down into a bellows.

And a very effective bellows they make, too.  If left unattended, a dead person clinging to a treetop will continue to breathe for weeks after their brain dies, and with each exhalation, a new spume of dusty grey spores.  It falls like a ghastly snow.

Ask a necromancer, and he will tell you that it takes a surprisingly long time for all the parts of a man to die.  Remove a man's head, impale his heart, and he will grow cold.  But it will take a day for his sperm to stop swimming, and three days for the last of his blood to quiet down (white blood cells).  This rude persistence of life--like a guest who refuses to leave after the party has ended--is why the freshest corpses do not make the best undead, paradoxically.

When the afflicted person finally stops breathing, the final ascocarp grows from their lungs, up the trachea, and out their mouth, where it fans itself out into the air.  The disease is capable of disseminating its spores passively, merely releasing them into the breeze.  The ascocarp resembles a flabby antler of pinkish-brown chitin that emerges from the mouth.

In this half-state between fleshy corpse and resinous sculpture, the body is eaten by predators, most famously flies, which swarm over the thing.  The eggs that they lay in the corpse will be entombed by resin before they hatch.  These flies are believed to carry the disease.  The lungs retain moisture (and therefore rotting flesh) the longest, and the sight of thousands of flies flying in and out of the mouth of a hardened corpse is what lends the disease its name.

And like the corpse, the fruiting body eventually hardens into a dry resin.

The Dembraava Wilds are full of these ghastly remnants.  All through the forest, you can find withered corpses clutching onto treetops.  After a storm, you can find them on the forest floor, looking for all the world like a wax sculpture of a crow-picked corpse in a contorted pose.  Separating their limbs usually requires a chisel and hammer, but many of them shatter when they hit the ground.

In some cases, they never fall from their arboreal perch, and the tree grows around them.  If their body is intact enough, it may be used as a home for squirrels or wasps, which nest in the vastly-expanded lung cavity.

The Dembraava Rangers call these corpses "watchers", and use them as landmarks.  They are often given names, and colorful stories are told about them.  But the rangers are always careful to avoid touching them, and fallen "watchers" are left where they fall.

The city of Paladros is full of them.  They watch from every ruined rooftop, their empty eyes staring at empty streets.  You can see through their enlarged ribcages into the fossilized fungal maze within.

If the Dembraava Wilds have a boogeyman, it is Zhilov.

A demon of fungus.  An angel of healing.  A spirit of fertility and growth.  A slithering thing that tunnels through the earth like a vast network of tiny white worms.  A woman in a green dress.  A man's voice who speaks from inside trees.  There is no consensus regarding Zhilov's true nature.

But the stories agree on one thing, though: when Zhilov is near, the watcher-corpses begin breathing again. 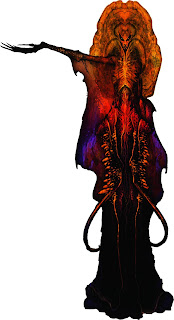