This is a continuation of my last post about homunculi.

First, look at this picture that my sister drew!  It's of a couple homunculi contemplating either (a) the ineffable ennui of existence, or (b) what to have for lunch. 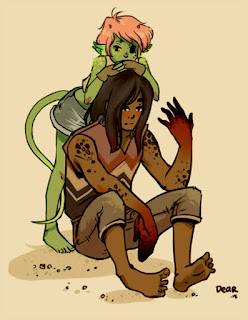 She has a tumblr if you want to see more pretty pictures.  (And you should.)

If you were turned into a dog, it would be like something.  There are sights (other dogs) and smells (doggy buttholes).  There are thoughts (consciousness) and sensations (qualia).  There might be parts you can't explain very well (all those weird smells) when you turn back into a human, but it's still there.

If you were turned into a stone, it would not be like anything.  There are no inputs, no thoughts.

If you were turned into a calculator, it's probably the same as being a rock.  It's not like anything.  Same thing for a computer.  And--presumably--an android.

Now imagine a perfect android--one that can duplicate a human perfectly.  Imagine that it can duplicate you perfectly.  If you stab it with a needle, it will say ouch (or whatever it is you say when you get stabbed by a needle).  It would react exactly like you would, in all situations.

What if it had an organic brain?  And flesh and blood just like you?  What if it was identical to you in all ways, except that it lacks consciousness and sensations.

It's just like you, except that there's no light on inside.

They are also called philosophical zombies.  This is what a proxy soul is.  It imitates sentience without actually experiencing it.  (Serylites are accused of the same thing.)

Homunculi are empty bodies, lacking souls.  Proxy souls are the simplest way of creating a completely obedient homunculus.  They're popular for that reason.

But proxy soul homunculi do more than just ape the human ape.  They're blank spots in the web of consciousness that covers the planet.  They're void zones.  In the rich strata of sentience, they're negative space.

A proxy soul homunculus is a slave homunculus.  They are controlled by whoever wears their slave ring (created at the same time as the proxy soul).    The slave ring is worn by another PC.

Proxy souls have three modes of slavery.  Their controller can order them from one mode into another with a word.

Automate causes the homunculi to behave like a robot.  They look and act like emotionless automata.  This makes them immune to emotions (both good and bad).  It also strips them of all initiative.  They are unable to do anything except the simplest tasks, and even then, only when directly ordered to do so by whoever is wearing their slave ring.  (Think zombie-level obedience.)

Imitate causes them to behave exactly like a person.  Or more importantly, exactly like a PC.  They are still obedient to whoever wears the slave ring, but their obedience is more interpretive.  They cannot directly disobey an order.  Like a bastard genie, they are forced to obey the word of an order, but not the spirit.

Proxy Soul Homunculi cannot be targeted by spells, even spells that normally work on objects.  They are also undetectable to all scrying and detection spells.  They are a blank spot.

As an action, the homunculus can cause a sentient creature to forget the last six seconds of the homunculus' actions.  Save negates.  If this memory loss causes any logical inconsistencies, the attempt automatically fails.

For example, a homunculus could stick his head into a room and shout "poops!" thereby alerting a goblin.  But then the homunculus would activate this ability, and the goblin would forget that he ever saw the homunculus (if the goblin failed its save).

This wouldn't work if the homunculus stabbed the goblin first, because then the goblin would create an inconsistency.  Why am I bleeding if no one stabbed me?  And then the attempt would automatically fail.  It would also fail if the goblin saw any other party members.

Proxy Soul Homunculi cannot be possessed (by ghosts, demons, etc).  Any creature that attempts to possess a proxy soul homunculi must save or be trapped inside it's cage-like negabrain.  (The lack of a soul where there should be one creates a spiritual "negative pressure" zone.)  A homunculus can hold a number of souls equal to its level.

After collecting a few souls, the brain of the proxy soul homunculus becomes like a jar of fireflies.  The homunculus can chat with these souls whenever it wants.  They are usually unhelpful (-3 to reaction rolls, by default) but can sometimes be bargained with.  Even dead people have wants.

And of course, you can always catch a friendly soul.  But be warned: souls were meant to pass on into afterlife.  Souls that remain on the material plane for too long tend to. . . destabilize.

Catcher in the Rye

The homunculus can perform a certain action on the corpse of a creature that died within the last round.  The creature must then save or its soul becomes trapped in the homunculus.

As an action, a homunculus can absorb a captured soul.  This heals the homunculus for 1d6 for every HD of the soul, and causes the homunculi to temporarily (or permanently) gain some elements of the absorbed soul's personality.

In theory, this is how a proxy soul can stop being a proxy soul.  If it absorbs enough souls in a short enough time, it can become a gestalt soul homunculus.  This is less of a class ability concern, through, and more of a plot point for the DM, if she wishes to elaborate upon it.

The homunculus opens up their face like a goddamn skull puzzle and sucks in someone's soul (save or die).  The soul must be within 10'.  Souls without a body to tether them (e.g. ghosts) get -4 on this save.

Honestly, just build your own from the abilities listed above.  If it were up to me, though, I'd start with a cleric, strip away spellcasting and turn undead, and add this stuff:

Roleplaying a Person Without a Soul

Proxy souls are able to talk candidly about the experience of having a soul.  There really isn't much to say--they have no reference point of what being souled is like, and so struggle to relate the experience.  Or more accurately, the non-experience.

Do they want souls?  What a cheesy question.  They don't have any desires beyond what they were created to have.  (Of course, they can start developing idiosyncrasies once they've had a few souls lodged in their vacuous headmeats for a while.  It's an inherently unstable position.)

It could be a person growing out of mindlessness and into open resentment, and subversion of orders.   It could be a frail old wizard who built a homunculus to look like a warrior-ideal version of his younger self, a vicarious vehicle, set to inherit the wizard's possessions.  It could be a Pygmalion-Galatea relationship.

Or it could be a awkward pain-in-the-ass that makes everyone at the table uncomfortable.  I don't know; playtesting is needed.
Posted by Arnold K at 1:19 AM