The Pillar of Fire 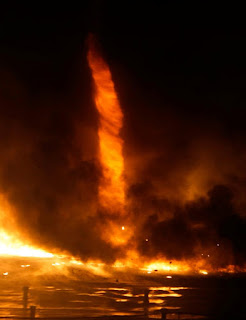 You can see it out there on the wizened flanks of the Elterspine Mountains, where it spills out of the ground.  It howls like a jet engine and is you can feel the radiant heat warming your face like an angry sun.  It pours into the night sky, bright enough to dim the stars by comparison.  Next to your boots, pebbles clack against the black grass, vibrating in tune with the thrumming pillar.

They are other pilgrims here, all wearing their pilgrimage collars.  Colored paint above their eyebrows marks their progress, unless they are wearing a penitent's mask.

The pilgrims began the Hesayan Pilgrimage in Coramont, where the prophetess first gave Truth.  If they have been performing the pilgrimage along the orthodox route, this is the first Miracle that they've seen.

They are watching the Pillar of Fire, but some of them are watching the travelers moving in the opposite direction.  It is said that the devil worshippers perform it backwards, and it is rumored that the Celestialist Hesayans perform the pilgrimage in a heretical order.

Up close, they can see the Pillar blowing out of the naked rock.  They inhale gingerly, but curiously.  This is the hot breath of hell, and they want to know what it tastes like.

A few pilgrims douse themselves in water, and then run up to touch the brass fence that surrounds the Pillar.  When they sprint back (singed and smoking and half-blind) they are grabbed by paladins who beat them for their zeal.  The fence is only to be touched on holy days.

All pilgrims are allowed to do is contemplate temptation, and the willpower to overcome it.

During the day, the flames die down below ground level, and the Pillar becomes a mere pit of fire.  Priests come out from the shrine in their blue robes amid white smoke from their pipes.  The ceremony begins; a blue bell is rung. 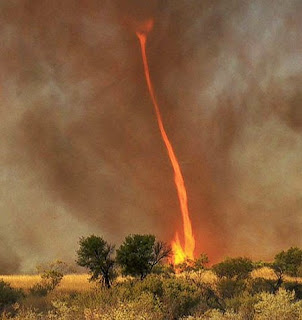 While suicide is considered a mortal sin according to the tenets of Hesaya, it is allowed here.  For an appropriate donation, the priests of that place will wash you, annoint you, and fill your lungs with the breath of heaven.  Then you jump into the pit of fire, at the end of mass.  This is the only acceptable suicide.  Devout and desperate people travel here from all over the Hesayan dominion to kill themselves.

If you jump into the fire pit without paying, you are commiting self-murder as well as theft.

Who's Jumping Into the Pit Today? [d6]
1 - A PC's mother, who thinks them dead.
2 - Some old woman with a dead cat.
3 - A cartload of sullen orphans.
4 - A veteran of foreign wars.  His battlecries have turned to ashes in his mouth.
5 - 1d3 criminals fleeing justice.
6 - A pair of forbidden lovers.

According to legend, the Pillar of Fire marks the spot where Iasu banished the demon Jangorian back to hell.  And indeed, the fields around the pillar are studded with clumps of bristly hellgrass, demonseed, and the other abyssal flora.  Everyone watches for demons amid the bristling cones, but there aren't any.

During the winter solstice, the fire actually recedes completely.  This actually creates a passageway to hell, if you want to skip the underdark and proceed immediately to the deepest pits.  You only have a day to finish your descent though, so don't tarry.

Will paladins be chasing you the whole way down?  Probably.

Are people going to be burned alive when the fire is turned back on?  Probably. 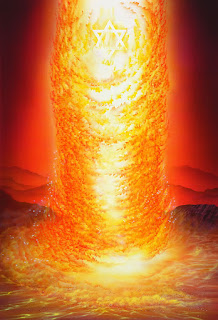 This is platemail that you are locked into.  Originally, this was something that aspiring paladins did voluntarily, in order to reinforce their vows by experiencing utter obedience.  Eventually, it became a punishment for paladins (and aspirants).

Each set of Oathbreaker's Armor comes with an oath inscribed on the front.  This is a single rule that the wearer must absolutely follow.  It's usually something like "I will protect this group of pilgrims" or "I will allow no one to enter the Hall of Priests except priests".

Anything that changes the engraved letters on the armor also changes the terms of the wearer's new oath.

While wearing the armor, you cannot speak.  The helmet is usually shaped like an alligator, a creature that is associated with lies. 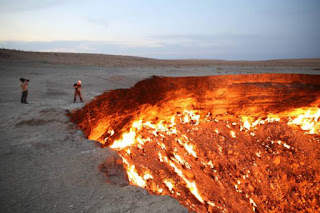