Curses and Stuff from my Viking Game 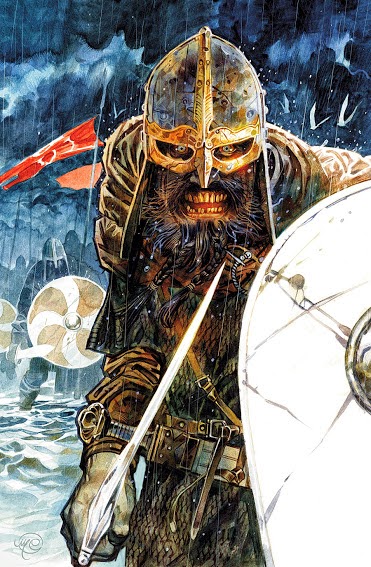 A person who dies wearing this cloak will be resurrected in 1d6 minutes with full HP, as long as they are still wearing the cloak at that time.  It is brilliant and unmistakable, and also gives you +4 to save against cold.

You cannot get rid of the monkey paw.  If you burn it, throw it away, eat it, etc, it will reappear in your pockets in the morning.

You get no good sleep while carrying the monkey paw.  You will wake up exhausted and covered in small scratches, as if from a monkey.

Short of dying, the only way to get rid of the curse is to make a wish on the monkey paw.  The monkey paw will grant any wish as long as it is directly harmful to the wisher.  Wishing for benevolent or beneficial things will be twisted, subverted, or ignored entirely.  For example:

Basically, the monkey paw is going to try really hard to make you regret ever using it.  It's sort of an asshole.

Functions as a potion of cure light wounds and then, if the eater fails a Con check, bestows a random mutation.

Anyone trapped in this painting can reach out (3' reach) and touch someone with a successful attack roll.  Someone who is touched must succeed on a save or be sucked into the painting, switching places with whoever is trapped in the painting.  Only works on living, sentient creatures.  If the painting is destroyed (it is not especially durable) the person in the painting dies (although it might be possible to restore the painting if you visit a painting restoration expert in a museum or something).

This tattoo is on your cheek.  Every day, it will crawl closer to your eye.  On the ninth day, it will reach your eye and rip it out, and a creature from the Outer Darkness will enter through your bloody eye socket, devour your soul, and wear your mortal body as a shell.

This tattoo is sometimes given by powerful evil creatures as a form of geas.  When the expected task is completed, the tattoo dispels itself, crawls to the person's back, and becomes a (relatively) mundane tattoo.

Curse of the Fairy Queen

Over the course of 3 turns, all non-fairy creatures in the Snow Queen's palace will turn into HD 1 rabbits (bite for 1d4).  Creatures that escape before 3 turns are over are safe.  Curse lasts until the wedding is over.

Can unlock any lock, but cannot be removed until the chest/door/whatever is closed and locked once again.  Can also be used to open people's ribcages (save or die), but this requires a successful attack roll.  Removing it from a rib cage also takes a round.

Found sleeping.  Once you wake it up, it will behave much like a normal newborn.  Every day it is alive, it will age 1 year and gain 1 HD.  After 18 days, it will leave the planet to rejoin its people among the stars, becoming a star itself.

It is valued by evil creatures because of its value as a sacrifice.