Here is my rejected submission for +James Raggi's thing.  It's based on Tlon, Uqbar, Orbis Tertius by Borges and the book from The God That Crawls. 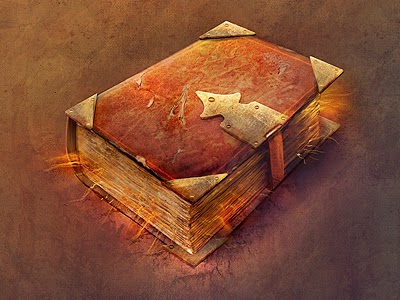 This is a huge tome.  The cover is made from acid-etched aluminum and cochineal-dyed leather.  The cover depicts a bearded man wearing a coat of stars and holding a scepter and a globe.  (Upon close inspection, the globe is actually a startling accurate map of the world.)

Once translated, the book details the thousand-year-long history of the Dvang-Ungali people.  They had a highly advanced empire before they fell into decadence and decline, eventually succumbing to the more primitive but infinitely-more persistent barbarian tribes that surrounded them.  They built three-sided ziggurats.  At their peak, they were sorcerer-kings of shocking power and childish cruelty.

For every week spend studying the book some new intriguing information is gathered.  (This is the bait on the hook.)  See the table below*.

Several things about the book are odd.

#1. They describe facts about the world that were only discovered recently (Cape of Africa, discovery of the Americas, I don't know history or years).

#2. They describe facts that are incongruous with the common knowledge (e.g. the book might propose that earth revolves around the sun, in a setting where this known to be heresy.)

#3. The authors don't seem to be human.  The speak of their "inner eye" and the unpleasantness of when the inner eye receives "unexpected visitations".  They also describe the conception of a child as requiring three parties: the father, the little mother, and the birth mother.

#4.  The book seems to change subtly each time it is read.

The first time the book is read, the Dvang-Ungali civilization is described as ending 700 years ago, a burnt-out shell of its former glory.  With each week spent reading the book, however, the date becomes more recent, and the empire in its final days is described as being more vital and adroit.

Histories of Dvang-Ungal can be found in other books in other libraries.  These books are not magical, and will corroborate whatever the most recent revision is.

In fact, the Empire of Dvang-Ungal is resurrecting itself, clawing out of the ashes of history into the present day.

These changes start out subtle, but by the time Dvang-Ungal has almost caught up to the present-day (say, it ended less than 200 years ago) the changes have become drastic and impossible to miss.

The PC can stop reading the book at any time, but if Dvang-Ungal ended less than 300 years ago, scions of the dead empire will appear after 1d20 weeks in attempt to reclaim the book.  These scions will usually be (50%) powerful archeologist-wizards with fossil golems, or (50%) powerful ancestor-worshipping aristocracy attempting to engineer events from a distance.

*Information Gained By A Week's Reading

1. Political useful information (knowing the true ancestry of the current monarchy allows for many blackmail opportunities).

2. The location of a hidden burial ground (which possesses a profitable high reward:risk ration)

3. A rare or previously unknown spell**.

4. A rare or previously unknown knowledge***.

1. Conjugal Venom
Level 3 Magic-User Spell
When this spell is cast upon a person suffering from a poison, all of their immediate family members suffer similarly.  More distant family members have milder, more cosmetic effects.

2. Innocent Revenant
Level 4 Magic-User Spell
When this spell is cast upon a creature that died in the last 3 turns, it immediately returns as an undead version of itself with full HP.  This revenant can never gain HP, and loses 1 HP every hour until it is destroyed.  The revenant is unaware that it ever died, even ignoring obvious signs of death (no heartbeat, cold flesh, gaping wounds).  However, if someone else insists on confronting them with evidence of their own death, they fly into a rage, becoming a mindless undead.

3. Summon Fish
Level 1 Magic-User Spell
A random fish within 1 mile is compelled to swim as close to the caster as easily possible.  5% chance of disaster (e.g. sea monster).

1. Recipe for nitroglycerin.  (dynamite does 5d6 damage)  Requires wyvern semen and gunpowder, but a more potent version can be made from dragon semen.

2. Construction plans for a catapult of superlative design.

3. The oaths of undeath, words which, if spoken with the proper intonation, supposedly guarantee safe passage from undead, as part of an ancient treaty with the emperor of Dvang-Ungal.

4. A remarkably accurate map of the world (although all of the names are bizarre).