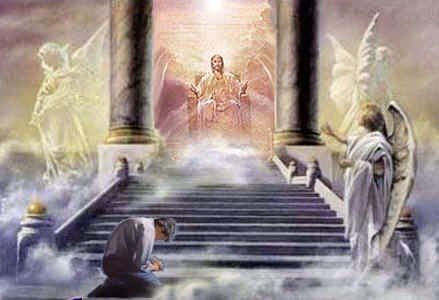 The Throne of God is the center of the Immaculate Cult.  (They desire to end all sentient life on the planet so that the universe will "reset".  They want this because they believe that Shaitan defeated God a long time ago, and that this world has been given over to sin and misery.  They're all nice guys, and they're led by the Radiant Maiden.)

It is hidden, of course, and in believed to be somewhere in the city of Trystero.

The Throne is an actual golden throne (worth 10,000gp).  It is empty, to symbolize the absence of a benevolent god (the Heralds think he was killed by Shaitan, and the world has since been abandoned to evil).  It is literally the chair that God sat upon when he visited the earthly realm.

Anyone seeing the Throne loses 1d6 faith (see bottom of page), save for half.

The Throne is surrounded by hundreds of men and women in white robes.  These people are entirely fixated on worshipping the throne.  They do not see anything except the throne.  They do no hear anything except their chorus of praise, which they constantly chant in unison.  As long as they are allowed to worship, they are in a state of bliss.  You can walk between them, even slapping their asses, without disturbing them in the least.

Treat them as level 0 commoners who can each cast cure light wounds once per day.

If they are prevented from worshiping the Throne, they will do whatever it takes to return to that state of grace, beginning with nonviolent means (but they're flexible).  At no point will they ever aid the enemies of the Heralds, or act against the interests of the Heralds.

If killed and examined, it will be discovered that they have no genitalia, anuses, digestive tracts, or blemishes of any kind.  Their worship has made them perfect.

The sanctuary also contains other members of the Heralds (who have not yet served enough to be allowed to join their friends in blessed worship).  They look forward to it, though, since it is believed to be a literal manifestation of heaven.

The sanctuary is also patrolled by angels.
Angel, Preacher
HD 4
AC 15
Move fly 15
Attack preach* or flaming sword (1d6+1d6 fire)
Save 6+
Morale 8
*When an angel preaches, all who hear it take 1d6 faith damage (save for half).  30' range.
**Anyone wishing to attack an uninjured angel must succeed on a Save.  Failure means that they are unwilling to violate such perfection.
***Angels will only use their flaming swords if their preaching is ineffective.

Since life and souls begin at conception, and most fertile zygotes never implant in the uterine wall, or if they do, spontaneously abort so soon that the prospective mother never has any idea of it, and the souls of children and babies go to heaven, most of the heavenly population is composed of the unborn.

If you look above the Throne, you can see them, humming and glowing like a great pulsing river.
Chorus of the Unborn (Angel Swarm)
HD 6 (swarm*)
AC 10
Move fly 15
Attack 1d4 radiant damage to all within their mass, + state of grace**
Save 13+
Morale 12
*As a swarm composed of pinpoint-sized flying zygotes, they are immune to most damage from mundane weapons (which only deal them 1 point of damage).  Torches deal them 1d4 points, and they always fail their save against area of effect damage (like fireballs).  They are affected by wind.
*Anyone damaged by the Chorus of the Unborn must make a save or be stripped of their imperfections.  They lose all diseases and class abilities until they commit a sin.

The Unblemished are what happens when an unborn soul is incorporeated in an adult body.  More on them later.

This is pretty much like sanity, except that if it drops to 0, you convert.

Everyone has a faith score equal to their Wisdom, except for clerics, who have a faith score equal to their Wisdom+cleric level.  If your faith score drops to 3 or less, they are overcome with doubt, and will refuse to attack angels, and will instead spend time questioning their faith.   If their faith score drops to 0, they will become believers.  They will not attack their old friends, but will try to keep them from harming the Heralds (as the charm spell).  Their biggest priority however, is presenting themselves to the Radiant Maiden and confessing their sins.
Posted by Arnold K at 10:26 AM