Random Encounters in the Abominable Island

Thinking about this dungeon. 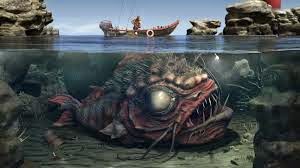 These are 1 HD berserkers.  Their attitudes range from murderous rage, to psychotic rage, to crazy insistence that the PCs join them in killing a monster that they "have cornered" in the next room (roll another random encounter). Each one is led by a 2 HD leader with a weird name, e.g. Beautiful Blood Sickness, King Toothsome.

If they depart amicably, they will offer the words: "Watch out for Charles."  (They don't know what it means.  It's just what everyone says down here.)

These are 1 HD berserkers who fight with no weapons, and instead bite and scratch for 1d4 damage.  However, each wound (and eventually, scar) becomes encircled by blue rings and purple keloids.  Each time a wretched prisoner damages a person, each scar that person has pulses with blood, dealing another +1 damage.  So the first scratch does 1d4 damage, the second does 1d4+1, etc.
If they depart amicably, they will offer the words: "Watch out for Charles."  (They don't know what it means.  It's just what everyone says down here.)

These are 1 HD fighters wearing leather or no armor (50% chance of each).  They are normally nonviolent (bonus to reaction roll), but will absolutely refuse to let PCs progress any further in the dungeon.  They will use barricade hallways, link arms, sing hymns, and argue that the PCs must not trespass on this holy place, not during this important season.
If they depart amicably, they will offer the words: "Watch out for Charles."  (They don't know what it means.  It's just what everyone says down here.)

Sort of like a triceratops-centaur golem made from living coral.

HD 9
AC 18*
Atk +7/+7 fists (1d8+numbing**)
Spd no faster than human walk
Immune to magic except that which specifically affects plants or animals
*Every 5 points of damage that the coral golem takes, it loses 1 point of AC as it crumbles apart to expose its fleshy inner body.
**Save or go numb.  1 failed save = pins and needles.  2 failed saves = -2 to all actions, 3 failed saves = paralyzed for 1d6 rounds.

HD 5
AC 13
Atk +5 natural attack (1d8 + kidnapping**)
*They resemble white marble statues, and so blend in with the environment, giving them a 4 in 6 chance to surprise.
**They can abduct people they strike, pulling them away through the marble statue walls that swing open to admit them.  On a hit, the target must make a save or be abducted.  On a failed save, the homunculus and the target are pulled through the wall into an adjacent room.  Each homunculus will only use this ability once per combat.

They resemble huge, predatory cats with long necks (like an eel), no fur or eyes, and gelatinous flesh.  Visible in the center of their semi-translucent body is a football-sized egg, which contains a embryonic princeling (very valuable to the proper sorts).

HD 10
AC 16
Atk +8/+8 claws (1d8/1d8 + rake*)
Morale 8
*if both claws hit, it hits for another 1d8 damage as it rakes with its hind legs.
**attacks that pierce its gelatinous body far enough to damage the egg (this usually requires a full length spear) deal double damage and force the egg bearer to make an immediate morale check.

Egg bearers are always found sleeping, coiled around their eggs. (They have a 0% chance to surprise.)  Each one is surrounded by 1d4-1 dreams, which cavort around the sleeping egg bearer and the egg.  They will not wake up unless something touches them or makes a loud noise.  Upon waking, all dreams nearby vanish.

Treat each dream as a HD 4 shadows that deal 1d4 cold damage on a touch, and deal an equal amount of Charisma damage, which recover 1d4 points each time the person gets a good night's sleep.  Each dream has a random appearance.  d4: 1 - fishman, 2 - some sort of fish, 3 - shark skeleton, 4 - drowned sailor.  Roll a reaction for the dreams as normal.  Dreams that are destroyed will be gradually replenished.

Although they are always found sleeping, they still move around when the PCs aren't looking.  Treat them like you would any other wandering monster.

Worms with hard bodies (like a spinal skeleton) and huge, succulent red lips.  They burst from the walls and kiss away your blood, leaving behind patches of blood plasma and painless needle pricks.

HD 1
AC 15
Atk +1 blood drain (1d6)
Morale 11
Movement as human*
*They are immobile while jutting from the wall (10' reach).  It takes a worm an entire turn to pull into the wall, or to burst from it.  While they can crawl along the floor, they always prefer to burrow through the walls whenever possible.

He is a 12 HD fighter.  Naked, but completely covered in blood.  Gore weighs down his long, greasy hair.  He has +3 AC from agility.  He became the unwilling, uncomprehending avatar of the Egg when he touched its surface.  His body is filled with exotic fluids that humanity never named, and his mind is full of dreams beyond his comprehension.  He is mad.  He wields the Blackest Hatchet (see below) and does not use a normal reaction roll.  Instead, roll on this table, even if it is not the party's first time encountering him.

1 - Psychotic rage.  Will chew his own lips halfway off and try to kill everyone, while spitting blood.
2 - Runs away laughing and banging on walls.  (Roll a wandering encounter check.)
3 - Approaches party singing work songs.  Will attack party when they do not know the proper words to the song.  (An impossible task, since he makes up the songs as he goes along.)
4 - Giggling Homicide.  Will spend time after a kill taking a trophy.
5 - Taunting.  Will attempt to tease the party by disarming them, knocking them down, etc.  33% chance of wasting his turn blathering incoherent insults at the party.
6 - Approaches party grinning and asking them about fish.  Will decide to kill the first person in the party who answers his questions, and pursue them to the exclusion of all else.

Regardless of his initial disposition, he will revert to #1 Psychotic rage as soon as he becomes seriously threatened (or below 50% HP).

He regenerates 1 HP per round.  If killed, he will dissolve into a nauseating black mist (tastes like poison and burning, but no serious effects) and will be resurrected by the Egg in 1d20 hours without the Blackest Hatchet.  He knows the location of the Hatchet, and will seek it out, Gollum-style.

This is a one-handed lumber axe (as battleaxe +1).  Against armored opponents, it destroys 1 point of AC with each attack.  On a natural 20, the target is crushed by benthic pressure: they make saves until they make it.  Each failed save does 1d12 damage, as their body is crushed into a unrecognizable pulp. 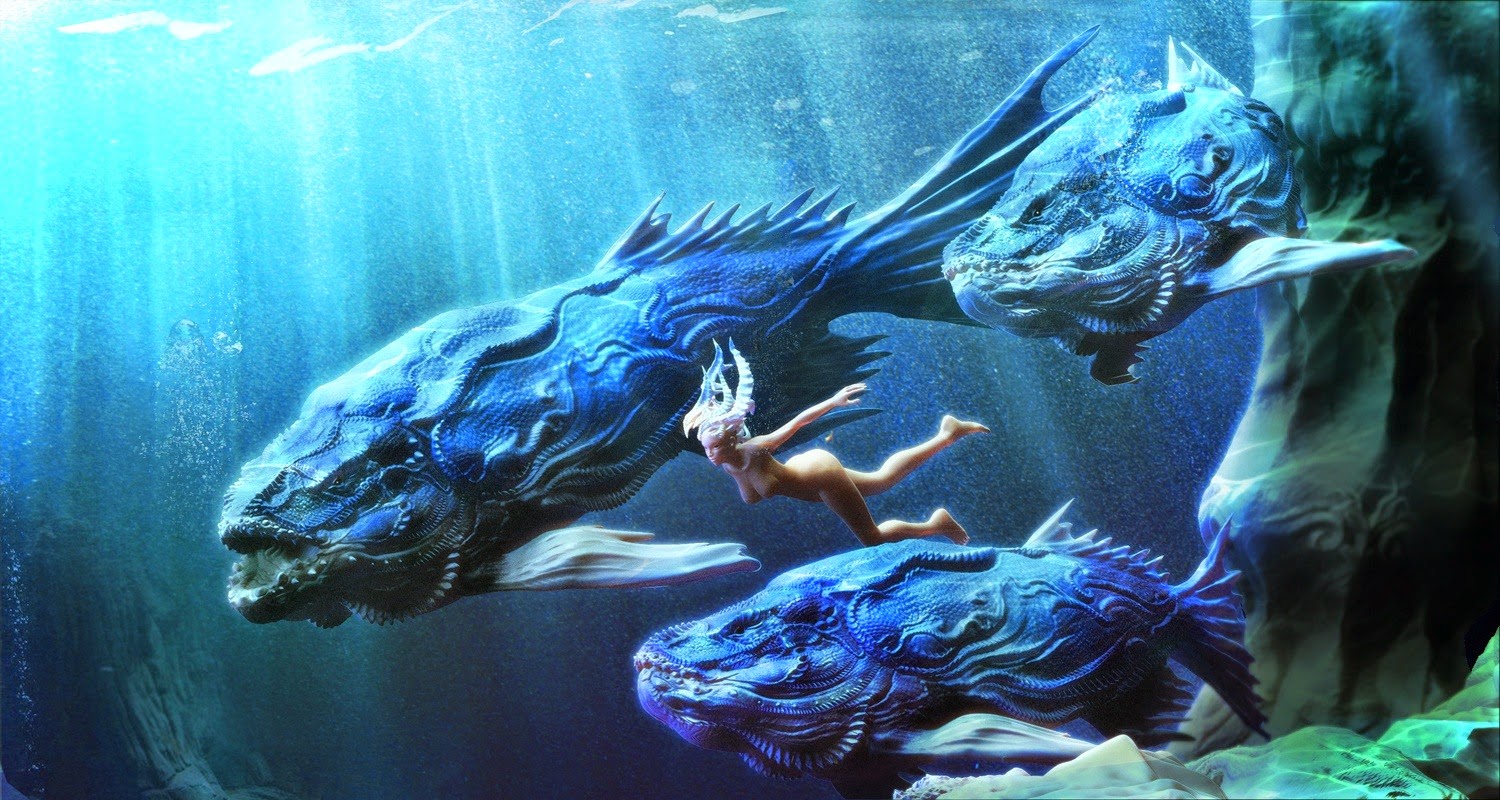 Accompanied by 3 bodyguards and 2 prostitutes, Gongui the Profit has been living inside the Island for almost two years.  He has grown pale and weird and rich.  He knows the upper levels better than anyone, but has never ventured down into the lower (although he has sent people down there, who rarely come up).  He sells maps, passports, and fresh water.  His face is a mask of politeness.

He is turning into a fish and thinks that's so totally rad.  Drunk on dolphin milk and jellyfish stings.  He has some things growing on his neck.  See that?  That's a gill!  Don't tell me it doesn't look like a gill.  What's a matter with you, you never seen a gill before?

This prisoner is all fucked up.  His skin is sloughing off and his eye sockets are shitting bloody paste.  He'll beg the PCs to kill him, and is too incoherent to do much else.  If somehow calmed (probably requires magic), he'll know a bit about the lower floors.

Sir Bredwin of Baine has gotten lost inside the Abominable Island while hunting an escaped prisoner.  He has lost his helmet and sword, fights with a statue's arm, and is desperate for a real weapon.  After calming down, he will make the party tea (he always carries tea), and appoint himself team leader (or the conscience of the party, at least).

Ghosts of fishmen drift through the halls.  They babble in their ancient tongue, confused and lost.  If somehow questioned, the ghosts only mutter about their missing queen-concubine and the needles that they've lost in the water.

A horde of sea lice boil through the area.  They crawl and jump all over the PCs, but are otherwise harmless.  In a few minutes, they are gone, except for a few errant specimens.

It's best to spring this on the players seemingly in response to something.  Like if a PC opens a door, inflict it on that PC.

The sounds of crashing wave and pounding surf get louder and louder.  One PC spits of some brine.  Then another barks out a mouthful of kelpy vomit and fish heads.  Then the hallway seems to fill with water that forces its way down everyone's throat.  Save vs drowning each turn until you make a save.

On the first failed save, you fall prone and begin to spasm.  On the second, your blindness darkens your eyes.  On the third, you die.  After the first successful save, the illusion is broken forever and you can see your companions writhing around on the floor, clawing at the air as they try to swim through it.  An escaped PC can try to help a "drowning" PC, giving them a +4 bonus to their next save vs. the illusion.
Posted by Arnold K at 12:25 AM