Something spooked the horses.

There are two leading theories about Feral Infant Syndrome.  The first is that it is a type of lycanthropy, which only affects certain infants, and is brought on by the sickness that is always present in moonlight.  The second theory ascribes it to faeries and their ilk, and claims that after a faerie has stolen a baby away, it replaces it with a Feral Infant, which is the source of both fear and wonderment among honest men.

Feral Infants do not stay in their beds at night, but instead leap from their cribs and wander the streets.

Laying awake in your bed at night, was that a cat that you heard yowling underneath your window?  Something woke you up, but was it the neighbor's goat? You've never heard it cry like that before.  Didn't you close that window before you went to sleep?

Feral Infants are possessed of an agility and strength far beyond their daytime selves.  Newborns that are too weak to lift their heads are suddenly capable of scampering up a drainpipe.  It has been said that they fight like cornered weasels.

Their nocturnal activities are varied.  Sometimes they travel around singly.  Sometimes they travel in packs.  They break into houses, gorge themselves on cheese and milk, and despoil what they cannot eat.  Or chase down stray cats and kill them in dark alleyways.  If threatened, they will hiss and bite.  If seriously threatened, they prefer to disappear down storm drains and mouseholes (which they can do with a 4-in-6 chance).  Only rarely will they seek the death of someone.

Adventurers who notice the pink-skinned imps shitting in their rations and seek to strike them down would do well to remember that at the end of the day, these are someone's children.  Feral Infants that are killed (brought to 0 HP) have a bad habit (2-in-6 chance) of crawling back into their cribs before expiring.  And in most communities, the penalty for killing a feral infant is the same as for killing a normal one: death.

And in many communities that 'suffer' from packs of feral infants, there is a strong, native pride in them.  Why be ashamed of such vital, energetic youth?  In these communities, feral infants are seen as something worthy of pride.  Windows are left open and milk left on the sills.  Many people seek out rituals or herbs, in order to entice the same transformation in their newborn.

Of course, these communities rarely share this secret with outsiders.  Especially not paladins or witchhunters.

It is said that feral infants who grow to adulthood become dhampir, who seek shadow but do not know it.

No, that's not right.  Feral infants grow up to become sorcerers of fey blood, and have the scent of scentless forests.

Or they flee into the forests and become druids, or perhaps bugbears.

Lastly, it should be mentioned that people speak of some darker, overarching intent the bind the feral infants together.  They sometimes coordinate their actions when they have no method of communicating, or behave with intelligence or knowledge that they should not possess.  For example, a parent attempting to restrain their feral infant by locking it in a cage will usually be assaulted by the other feral infants in the city, who will attempt to free their fellow.

Feral infant activity peaks during the full moon, but they are invariably quiescent during the new. 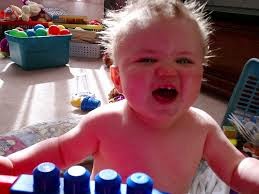 How to Use This in your Game

Put it on the random urban encounter tables, obviously.

Feral babies don't need much lore, other than "Although they are feral babies who bite out the bottoms of your pockets, they are someone's babies and you probably can't just kill them the way you would kill a rabid dog."

They occupy the same monster-space as urban imps or gremlins.  Run around, break shit, kill pets, despoil food.  However, their logic is (maybe) a little more straightforward than an urban gremlin, plus they have the complication that people won't thank you for killing them.  Also, they're babies who hide in cupboards and throw knives at you.
Posted by Arnold K at 12:09 AM