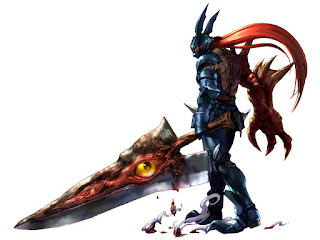 One path to immortality lies through undeath.  This is lichdom, and it is frequently sought by spellcasters.

Another path lies through demonhood, and it is usually a warrior's path.

Like the process of a lich's acension, a demon blade's transformation is a closely held secret, shrouded in secrecy and red rumor.  It is known to require a willing demon and a paladin's blade.

Digression: The essence of a demon is corruption.  Demons are not made from evil souls; instead it is the greatest saints who are shaped into the greatest demons.  Because demons do not exist separately (they do not breed nor build) they are forever the our dark mirror.  Their history does not, cannot diverge from our own.

The process creates a cursed blade, imbued with the warrior soul (or more accurately, the warrior's seven souls).  This demonic weapon is the true demon blade.  The figure clad in bone armor, whose blade burns with green fire, who pulls his enemies heart into his hand from across the room--that is just a puppet. 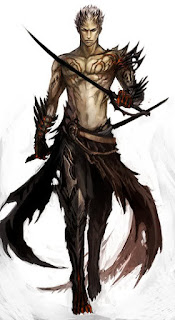 Use the cleric as a base template, subtract clerical stuff.  Use the fighter's XP progression.

Demon Blade
You are a hellish red sword (although I guess you could be a hellish axe or hammer if you really want).  You are a sword +1 that can dominate whoever wields it (as is standard for many cursed weapons).  People who are unwilling to be dominated follow the usual rules for the dominate spell.  Dominated creatures use their own ability scores, but every else (save, attack bonus) is derived from you (the death blade).  Dominated creatures chafe against the reins, and get -2 to all attack rolls for the first week.  The domination effect ends as soon as they stop touching you, so if you are disarmed, they're free to follow their natural inclinations.  You cannot dominate a new person unless you release your old one, and if a target makes their save against your dominate, you cannot try again until tomorrow.

You can see and hear out of the blade, but you cannot speak except through your wielder.  (But really, who is wielding who?)  Regarding damage and breakages, you follow the same rules as any other magic weapon (you can be damaged by things that are at least as magical as you are, like a bad hit against a shield +1 or a demon that can only be hit by +2 weapons or greater.)

Chariot
A person who willingly joins with you (instead of just being dominated by you, and without coercion or threats from you or your allies) becomes your "chariot".  That's the demonic term for a willingly dominated person.  When you are wielding a chariot, you get several advantages:
Getting someone to willingly be your chariot is not something you can do with coercion or threats.  You need to find a truly, truly desperate NPC to agree to it and then probably perform some service for them.  (Sounds like a quest to me!)

Harvest Soul
You can drain the soul from a recently killed enemy.  This takes a standard action and requires you to impale the corpse with your demon blade within 1 round of the corpse's death.  No effect on targets that lack souls.

This has two effects.  First, your wielder heals 1d6 HP, plus 1 HP for every HD of the target.  Additionally, the target's soul is trapped in the demon blade.  The demon blade can hold up to 3 souls.  Trapped souls can see and hear from inside the demon blade.

At any time, you can chat with souls trapped in the demon blade (and it may be difficult to get them to shut up).  They are generally unhelpful (similar to speak with dead) but can become helpful if you do favors for them (pass messages on), fight against a mutual enemy (orc souls will happily tell you everything they know about elf territory), or entertain them (a soul might appreciate seeing a favorite opera, for example).

Spellcasting
You can cast spells from the demon blade list.  Beginning at level 3, you learn a new spell every level (your choice), and another new random spell every time you kill a dungeon boss.  (If a dungeon has no obvious boss, the boss is the highest level hostile creature in there.)  If you learn the 12 spells listed below, your DM has to come up with some newer, better ones.

Spells are powered by souls trapped in the demon blade.  You can cast as many as you wish, as long as you have sufficient trapped souls.  If you see an 'X' in the spell description, it refers to the HD of the trapped soul.  You use a soul in its entirety--no half-spent souls.  And when you use a soul to power a spell, always try to flavor it as appropriately as possible.  Using reap with a goblin soul should probably sound like a shrieking goblin and leave goblin bite-marks on the target.  Using burning blade with a lich's soul should probably conjure up blue flames that cause numbness rather than immediate pain (that comes later).

Minions
A bunch of demons show up to pledge their loyalty to you.  3d20 lemures, 1d4 bone devils, and 1d4 succubi.  They will expect you to lead a crusade back into hell, to reconquer it from the paladins. 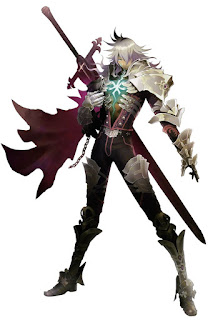 2. Dance of Hell
T: self (blade)  D: X rounds
You function as a dancing weapon.  You still maintain control of your chariot.

3. Deathgrip
R: 50'   T: creature
If a creature fails a save, it is pulled to adjacent to you.  You may make a basic melee attack against it if you wish.

5. Disguise
R: 0  T: self  D: X hr
You appear as someone else of comparable size.  This is only an illusion, but it also changes your voice to match.  (If you are playing with detect evil, I suppose it can fool that, too.)

6. Heartripper
R: 20'   T: creature
If a creature has Xd6 HP or less, it's heart is ripped out of its chest and into your hand.  No save.  This is usually fatal.  No effect on creatures that lack hearts.

8. Inferno
R: 20'  T: self  D: X turns
Everything takes 1d6 fire damage each turn (Con check for half).  Most shit catches on fire.  You are immune to fire damage for the duration of this spell.

10. Salvage the Chariot
R: 0  T: self (chariot)
Instead of dying, the chariot survives with X HP and is stunned for 1d6-X rounds (min 1).  You still suffer the other effects of the injury (broken limbs, etc).

They lack a fighter's HP and attack bonus, but they get a lot of little tricks to compensate.  The first and probably strongest is just that you're a cursed blade.  You're really hard to kill, but then again, even goblins will probably figure out that this blade is fucked, let's pile a million rocks on top of it and be scared of it forever).  And of course, there's always the option to just pass the blade off to an enemy, who you can then dominate.

What a really want to see is a player chuck the demon blade like a spear, impaling the enemy commander, and then dominating him.  I'm okay with this because it has so many ways that it can go wrong.

And since the only thing that you import from the dominated creature is ability scores, even a dominated goblin will have your levels and (a similar) HP.

Some of the spells are quite powerful, but the slow rate of acquisition balances it out somewhat.  The small capacity of the blade (3 souls) and the rarity of the ammunition (you gotta stab people the round after they die) balances it out further.  Plus, it creates an interesting dilemma in combat.  Do I harvest the soul of the guy I just killed, or do I help kill the ogre that's still standing?

There's no class abilities after level 3, but that's because the spells are self-balancing.  As the players kill higher HD creatures, the demon blade character will have higher HD souls to spend on bigger spells, like a +8d6 damage reap.

There's also a bit of character motivation backed into the mechanics, since players benefit from killing high level clerics and demons.  A person playing a demon blade for the first time, who has no idea what to do next can read the character sheet abilities and announce, "guys, I think we should go to the church and kill the cleric".

UPDATE: J.M. Perkins wrote a post about the different types of immortality that different classes enjoy.  A Lich for Every Class.
Posted by Arnold K at 12:07 AM