There's already an obvious example of this in play: wizards can learn new spells by finding scrolls and adding them to their spellbook.  So a wizard, even if they are at the level cap or whatever, still has a mechanically incentivized reason to play.

And there are a few old-school things that advanced characters without just giving them XP.  Like a fountain that gave +1 Str to whoever drank from it, for example.

You could also argue that magic swords and their ilk are a method of advancement not tied to XP, but we're getting into gear, and that's almost a different thing.

I've been gradually inserting other examples into my homebrew.
<digression>   I just had this idea about cherubim, and added it to the angels page.

Cherubim are extremely important, for one reason: they are engineering the birth of the messiah.  You think saviors are born just by chance?  It requires hundreds of generations of careful breeding to bring about the right collection of genes and environmental factors to create the next Prophetess, which only happens if the right people fall in love with each other.  And woe to anyone who interferes with the finely wrought clockwork of their fanshipping.  </digression>

So, with that in mind, here's my idea about monks.

When I picture a monk, I'm basically picturing a pastiche of all the martial artists I've ever seen in anime.  This includes Goku.

And how does Goku become more powerful?  Not by winning.  Goku becomes more powerful by losing, and then running away and training for a fucking six episode piece of shit why is King Kai even a thing.  Fuck him forever.

Anyway, here's my first draft of an ability that you learn at level pXX: 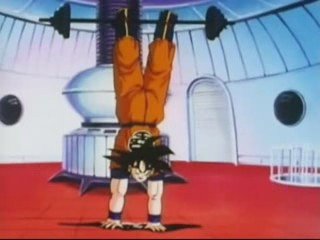 You learn your first Secret Technique: Stunning Fist.  You learn additional secret techniques whenever you are defeated by a powerful foe and then spend a day training in some dramatic location in order to beat them.

What constitutes "defeated by a powerful foe" is left up to the DM, but a sincerely-fought combat that ends in player death or retreat should be considered a defeat.  Alternatively, the monk could seek out a Hidden Master and receive training from him.

Secret Techniques
Each secret technique costs 1 HP to use, maybe.
So Where Is This Hidden Master Anyway?
What Bullshit Does the Master Demand Of You?