So I went to my first con.  I wouldn't have gone if Vic hadn't bullied me into it, so thanks, Vic.

It was awesome.  It was like a zoo full of nerds.  I spent a few minutes gawping before I found myself discussing dice mechanics with a guy in a 13th Age shirt, and I realize that I, too, am a nerdy zebra, and this is herd.

It was a small con in its first year.  I stayed in the same hotel, six floors above.  This was convenient because I like to mix beer and D&D and I was worried that this would be impossible at a con.

I got to meet +Stacy Dellorfano, so that was cool.  She speaks about games optimistically and critically, as if they were tools that could change the world for the better.  Which of course, they are, but it's rare to have it discussed through that lens.  She also has really nice hair.

Everyone at a con has one thing in common: we are all passionate about games.

Some of the players you meet at your local comic book store are just there because their friends are there, but anyone at a Con shelled out some serious shekels to be there.  There were no filthy casuals, stinking up the place with their talk of raids or Heismans.

And this homogeny was doubly nice, because it's always easy to talk to someone about the subject of their passion.  (Most people are passionate about something.  Some people are passionate about lots of things.)  I could walk up to someone and just start yelling at them about how bluffing and bidding games were awesome because they had a built-in metagame, and they would happily start yelling back because they had opinions about that.  Everyone did.

There really wasn't time for shyness.  I don't know about everyone else, but I felt a sense of urgency.
Every hour I spent sleeping or eating was an hour that I would be missing out on all the cool stuff.

Maybe that's why everyone was so friendly.  Or maybe all cons are like that, and it's not just because OrcaCon bills itself as an "inclusive analog games convention".  I was wondering what "inclusive" implied until I saw that you can identify your preferred pronouns by hanging a ribbon underneath your badge that identified your preferred pronouns.


My Name Is Arnold K. and my preferred pronouns are he and him.  <Contessa ribbon goes here.>

There were also pins that let you identify yourself as asexual, pansexual, other sexuals, and/or a straight ally.  Also the t-shirt was an orc riding an orca riding a big gay rainbow wave.  It was very lovable. 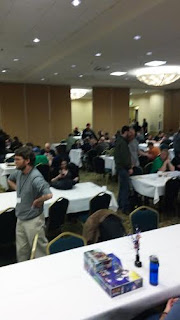 There was a game called Golem Arcana.  I played it and it was awesome and I had fun.  It's a miniatures wargame where you control a team of golems (basically fantasy mechs) and smash other fantasy golems.

But what was really interesting about it was that everything took place inside an iPad.  All of the positioning, movement, dice rolling, cover calculations, etc took place inside the iPad.  The minis (and they were big, beautiful minis) were just a mirror to the stuff on the iPad.  You moved your pieces on the screen, and then you moved the minis so that the situation on the table would mirror the situation on the iPad.

The minis were entirely superfluous.  You could run the game just fine without them.  They only existed because people love relics of our hobbies.  We love things we can pick up and hold.  The spine of your DCC shirt looks cool on the mantle, sure, but a row of miniature dragons looks cooler (and is a lot easier to explain to your aunt).

Digression: You could also claim that minis aren't a lot more than just a representation.  They give a sense of depth, thickness, stability, motion that a picture can't do.  And you'd have a point.  But bear in mind that these are $40 minis, so I'd argue that people are paying for more than just an interesting piece of art.

Now, when you love a hobby, you want to go out and buy it, surround yourself with it.  But D&D, as I play it, is a pile of intangibles.  It doesn't have a lot of physical artifacts unless you play with minis.  It's plots and monster descriptions and words like "batrachian".

Dice are the only real artifact that we have.  That's probably why I buy so many I don't need.

Digression: There's nothing wrong with minis, but I have noticed that a lot of DMs and players treat them as if they were all the description a situation needs.  You already know what the monsters look like and where they are, so there's no need for the DM to go into any further details about them.  It makes (some) DMs lazy. 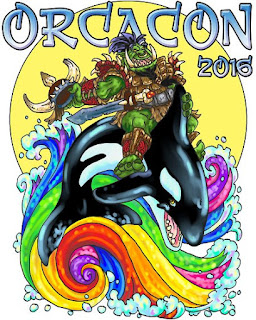 The OSR was not represented there.  Except, I suppose, by me.  In a couple of the 5e games there was some scheming, improv, and rules flexibility (things I associated with the OSR), but the other games were just naked mechanics.

Mind you, some of the mechanics were excellent mechanics, and/or mechanics that allowed for fun roleplaying.  I played in a 13th Age game, and there was tons of roleplaying.  But the roleplaying was just a paint job--it didn't really affect the actual gameplay one iota (which was just a set piece combat against a pile of nameless, mute orcs).

Digression: I feel like 13th Age has a lot of things that encourage roleplaying (icons, one unique thing) but those are just wrapping paper on a combat system that is as rigid as 4e.  (And by rigid, I mean it depends on rules, not rulings.)

And talking to people, I saw all this excitement and attention given to mechanics.  Games were codified, judged, and discussed in terms of their rulebooks. There was the sense of "any problem can be fixed by fixing the mechanics, because any problem is a mechanical problem". (At least among the few people I talked to on the games room floor, not at the panel about games and education.)

Which is weird for me, because I see rules as only a tiny part of D&D.  Like, you pick up a Swords and Wizardry book and you look in it, and you see all these rigid, interacting systems, and you'd be forgiven for thinking that the game was just as rigid and deterministic as chess.  But then you actually play in a Swords and Wizardry game, and you realize that the rules are just a skeleton inside a fleshy body, and that the real meat of the game is DM rulings and players scheming outside the box.

Anyway, there was little attention given to the softer aspects of a game.  Maybe its my fault for talking to board game designers about the value of rules that lend themselves well to improvisation, or why rulebooks (even rulebooks for board games) should include a few words on interplayer attitudes and framing.

Online, I hang out in my echo chamber of OSR bloggers (as do a lot of you, I suppose), and it's easy to forget what tiny minority we are in the larger tabletop RPG world.  I felt like an island king who sees a world map for the first time.

I ran a table.

I was nervous to DM, which was interesting.  I haven't been nervous about DMing for years.  Even that was pleasant, in a way; nervousness is a young man's game.

Perhaps it was because every other table that I saw had polished, finished products.  They ran D&D with glossy DMGs and fully painted minis.  All I had was a backpack full of dice and paper.  And not even the right paper, dammit.  Ten minutes before the game I was still printing out handouts and stealing pencils from better prepared people.

Anyway, the game was excellent.  Everyone had a lot of fun.

I ran a semi-sandbox in Goblintown (which grown enough that I should probably write another post or two about it).  Out of five or so options, they chose to sell their services as bounty hunters, and attempted to kill Filthmaster Blorth, reputedly the filthiest goblin in goblintown.

(Goblintown is ahistoric.  Goblins do not keep records of anything.  They have no idea what year it is, and they disagree over who the last king was.  Filthmaster Blorth is also the closest thing that the goblins have to a historian, since he can read the secret history of objects.  His filthiness is next to godliness.)

The high point was probably getting to the end of the Filth Library and finding the final room empty, except for walls covered with creeping crud and a porcelain throne.  Sitting on the throne (and making their save) granted the players a free question, which would be answered honestly.

They asked "Where is the Filthmaster?"

I told them "Behind you, descending the shaft inside his gelatinous cube mount."

The session ended with the players looting the Filthmaster of his ring of control ooze, ring of protection from acid, porcelain snorkel, and then riding away inside his gelatinous cube.  At least one of them wanted to become the next Filthmaster, which honestly sounds like a great start to a new campaign.

I fucking love D&D.  Thank you Jeff, Brody, Brandon, Cici, Andrew, and Bev for being such excellent players.  You were the pros of the con.

Anyway, those guys and girls gave a lot of feedback, mostly good, but I've been mulling over one piece of advice: "When you write adventures, be aware that most people aren't as good a DM as you are."  I think that's a suggestion to write more clearly defined adventures, with more rigid and clearly defined mechanics.  Less improv, more machinery. 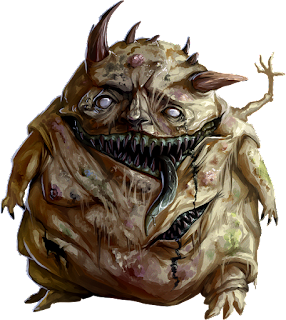 Also, one of my players noticed that the filth was dissolving their body, and they decide to allow it, becoming one with the filth.  One of the more metal deaths I've had in my games.  Truly a superlative goblin.