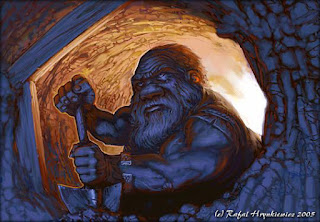 Dwarves don't worship the dwarf god.  There are no dwarven gods (possibly because no dwarf has been creative enough to invent any) and in fact, the whole notion of gods usually requires some explaining in the first place.

Hesaya is the primary religion of the dwarves, just as it is the primary religion of the entire continent of Centerra (although it takes a few different forms).  Like everyone else, they indirectly revere Zulin, Prince of the Upper Air and directly worship a multitude of local priests and slave-gods.  But how do you get dwarves to worship an air god?

Missionary: "What is better, the earth or the air?"
Dwarf: "The earth, because it gives us toil, tombs, and bread."

Missionary: "But does not the act of digging create an air-filled tunnel, which allows you to access more of the earth?  You claim to love the earth, yet you strive for its absence."
Dwarf: "Harrum.  This does not seem to be entirely untrue."


And so this is the root revelation of the Dwarven Covenant: that goodly dwarves will never escape the cycle of rebirth and enter the Heavenly Mansions of Truth.  Instead, goodly dwarves will simply be reborn as dwarves, to dig in the endless earth for all eternity.

One knock on effect of this philosophy is that each dwarf believes that they are already the best lifeform possible.  There is no hope for a better life, because the dwarven life is the best life for them.  This leads to a great deal of civil contentment and smugness.

Note: If you're a regular reader of this blog, don't try to follow Hesaya too closely.  It's gets rewritten every couple months because I can't make up my mind. 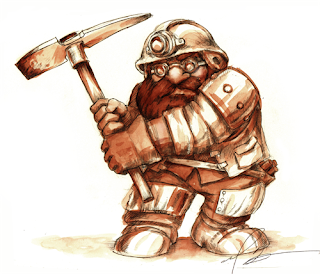 And so the most devout dwarves engage in the Quest to Find God, which mostly involves digging as deeply as possible.  It's a cross between mining, a never-ending pilgrimage, and the Crusades.

There are multiple, concurrent Under-Quests.  Each one is a legion of dwarves digging to the center of the world, supported by supplies from their surface cities.  In the centuries since they started, the front of this ant-line has moved deeper and deeper into the Underworld, leaving dozens of empty cities and cathedrals behind them, abandoned as they build new ones deeper and deeper.

Quite of few of the Dwarven Crusades have become lost, and the fate of these unknown, eternally digging colonies is not known. 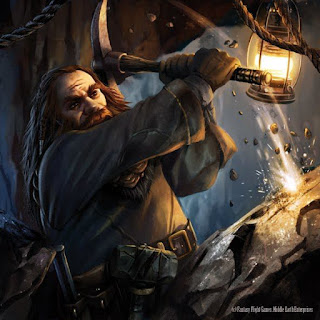 Dwarves have no concept of gender, and struggle to discuss sex.

Male and female dwarves look identical, unless you get them naked.  They are completely unromantic when sober, and marriage and conception is something that is usually performed in the service of their king or council.

The non-creative, work-obsessed dwarven psychology disappears entirely when they are drunk.  It is during these times when dwarven acts of passion are committed.  These include marriages and joint mortgages, but they also include more traditional one night stands (which are usually accompanied by a lot of fumbling around with belts and beards, and a lot of speculation whether the other dwarf's hardware is a "bolt" or a "nut".  Not that it changes the outcome much, except when it comes to pregnancy.)

They don't have gendered pronouns.  The closest thing that they have are the concepts of craftsdwarf and miningdwarf, which they use as translations for 'female' and 'male' respectively.

A big divide in dwarven culture exists around the concepts of those who obtain raw resources (the miners) and those who refine them (the crafters).  This schism is large enough that dwarves often lament their irreconcilable psychologies ('craftsdwarves are from Venus, miningdwarves are from Mars').  And like human genders, these labels come with a host of stereotypes and cultural expectations.

Craftsdwarves tend to care more about their appearance and be more assertive, for example.  (The appearance thing is not to be understated; some miningdwarves are filthy, and spend decades without beds, baths, or razors.)

Dwarves use craftsdwarf and miningdwarf as stand-ins for 'woman' and 'man' in private, or around humans if they are still largely unexposed to human culture.  This is because miningdwarves are usually away from home, doing hard labor, while craftsdwarves rarely travel too far from their hearths.  This is the most salient detail dwarves notice when trying to tell apart human men and women.

They struggle to notice boobs and timbre.  Gender just doesn't sit very close to sexuality in the dwarven headspace.

The biggest oddity is that dwarves sometimes change professions throughout their lives, especially in the miningdwarf to craftsdwarf direction.  This leads to odd questions, such as:

Dwarf: "You repaired that saddle excellently.  Are you planning on becoming a woman in a few more years?"
Man: "The fuck you say?"

It is rare, but not unheard of, for biologically female dwarves to adopt human culture down to its gender roles.  These dwarf-women shave their beards; other dwarves usually mistake them for halflings at this point. 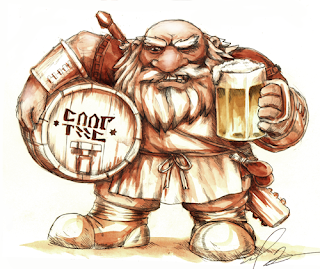 Dwarves frequently identify themselves according to what their labor produces.  Here are some sample names for a miner, gemcutter, and warrior.


First names are reserved to intimate friends.  Those who meet Tivik had best become accustomed to addressing the dwarf as "The Smagdarine Eye" for a while.


<digression>This is similar to how dragons identify themselves by their hoards, or by the most valuable item in their hoard.</digression>

Being non-creative, sober dwarves struggle in leadership roles.  For this reason, dwarven kings are never kings themselves.

They are known for kidnapping clever people and forcing them to rule the dwarven kingdom.  (They are good at detecting duplicity and schemes.  They are non-creative, not stupid.)

But they sometimes engage in the practice of shackled kings.  This is when they summon a clever devil and force them to become their king after extracting a lengthy and comprehensive contract has been drawn up.

And not just one devil-king.  They usually get a hold of several devils and force them to work at cross-purposes.  (Pitting the Devil King of Infrastructure against the machinations of the Devil King of Military keeps the devils working in the dwarves' interest.  Most of the time, anyway.)

The only time that dwarves are ruled by dwarves is when they have a Council of Drunkards. 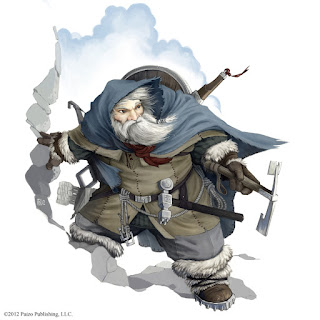 When dwarves invade a place, they usually kill all the underclasses, but preserve the nobility.  The captive aristocracy is confined to their houses, but is generally allowed to continue going on as they always have.

They are attended by dozens of servile dwarven war-butlers, armed with daggers in case the old nobles try anything funny.  The children of these nobles grow up in a city that is 99% dwarven.

The former aristocracy will be depended upon to run the administrative tasks until the dwarves figure out how to take over these things themselves.  Then these human families will be ushered into service industries: masseuse, psychiatrist, and bards (roles that dwarves struggle with, or despise doing).

Debt is something that is common to many dwarves, and they frequently incur a mutual debt in order to cement a treaty or a marriage.  It is a revered--almost holy--tradition.  Since one dwarven family might be richer more than another, or they may be unequal when it comes to repayment, it is often that one family slides into debt to another.  A large proportion of dwarves are born with huge debts.

This isn't seen as too onerous, since it is honorable work.  It only requires fourteen hours of labor a day for several decades, and then the dwarf is free.  Working your way out from under a large debt is immensely respected among dwarves, and is accompanied by parties, laurels, and all the tasteless beer they can drink. 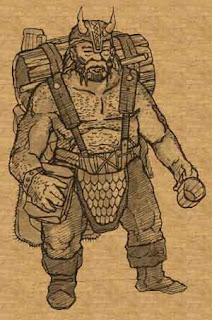 Dwarven prisons are always fortified labor camps.  This is also not seen as too terrible, since there is always work to do and the work is always tallied accurately.  Sometimes a human is condemned to a life of hard labor in a dwarven work prison, and the dwarves will wonder why the human cries so much when the sentence is read.

Even dwarves in solitary confinement are given bricks to stack or a pile of straw to sort.  Lacking that, dwarves go insane, and will smooth the walls until their hands bleed, or slip into the idiosyncratic madness known of fleshmining.

More than any other race, dwarves tend to go insane.  There is a lot of genetic pressure on their behavior, and it creates a lot of psychic friction.

Stable colonies of insane dwarves are known as the duergar.

But there is an upside to this madness.

It is well-known that magic items (aside from scrolls and potions) are only created by a master craftsman in a mindset of great instability: fear, love, and of course MADNESS.

Dwarves are also the most likely of the races to allow madness to run its course.  Mad dwarves are often sealed up inside their homes and given the materials needed to perform their crafts.  A close eye is kept on them, and they usually send for the healer when the mad dwarf begins headbutting the floor monotonously or eating their own beard.  This is why dwarves have more magic weapons than anyone else.

They also sometimes die from overwork, but this is something to be revered, like starving to death because you gave all your food to hungry orphans.

What do dwarves do when they have no work to do?  When there is an absence of gems to cut or metal to work into armor?  There must be a release valve somewhere, for the overflow.

And this is the function of tombs in dwarven society.

A dwarf's most prized possession in their tomb.  The usually begin digging it when they are very young, and they will slowly excavate it throughout their entire lives.  They like this because it is concrete and (relatively) impossible to steal.  It is eternal.

And so every dwarven city is surrounded by a halo of tombs, most of which are occupied.  This also helps with their brand of ancestor-worship.

If you do a great service for the dwarves, they will probably reward you with one of the royal tombs.  (The laborers who built the royal tomb are already buried under the floor.  It is their tomb, too.)

Humans who would prefer to have territory, money, or soldiers instead of a royal tomb are usually given these lesser honors, with a shrug.  Who can understand the minds of humans? 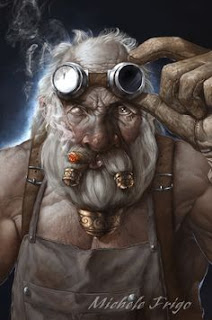 According to the high elves (who alone have a history that predates the Time of Fire and Madness), dwarves were created by them be a race of asteroid miners.

I've been thinking a lot about dwarves lately.  Hopefully this will make the beards stop.

See Also:
A Few Words on Dwarven Culture
The Dwarves of Mt. Doldrum
Posted by Arnold K at 11:00 PM