Go read a list of demons and you'll notice how Christian they are.

I don't mean that the demons themselves are Christian, just that they are designed as an evolution of human morals.  Demons are often designed to exploit one of the seven deadly sins, for example.  And angels are stamped from the same Judeo-Christian coin, just the opposite side.  And this set of Christian morals informs the whole structure of morality and divinity within a game.  The good gods are the ones that embrace Christian values, and the bad ones are the ones that eschew them.  Time and time again.

This is moral chauvinism.

The funny thing is that D&D has often been about exploring other cultures, religions, and ways of life.  The best parts about it were like the best part of old Star Trek.

And yet this diversity of otherworldly cultures never really spread into morality.  And once you notice that, a strange incongruity begins to emerge.  There are lots of races with bizarre cultures and moralities, not just Christian ones.  Yet, the arrangement of heaven and hell mirrors Christian values, and only Christian values.  Where are the foreign angels?

And that last paragraph was just for normal, Earth-human cultures.  We haven't even gone into the deep end of fantasy cultures yet.

What if D&D was written by elves, for whom pride was the highest of virtues, and chastity the deepest of shames?  Or by druids, who see language as the root of all evil and bestial mindlessness as something to be aspired to?

Fuck, what if it was written by work-obsessed dwarves?

There are many places where we could begin rewriting the moral cosmology, but maybe we should start here, and just start

Human angels represent human values (which are not monolithic, but have certain predispositions), and tend to resemble humans (if they resemble any humanoid at all).  Their angels tend to be white and radiant, while their demons are often muscular and fiery, and speak to their private shames.

Dwarven angels represent dwarven values (which are not monolithic, but have certain predispositions), and tend to resemble dwarves.  Most notably, they all have beards (which dwarven demons never do).  Dwarven angels swim through the earth, and many of them resemble moles or other burrowing creatures.  Most of them give gemstones as gifts, or leave them in their wake.  Many of their angels are associated with fire or other symbols of the forge.  Dwarven demons tend to be invisible things, or creatures without any muscle or callouses.  Every dwarven demon is supposedly unique.

Elven angels are freakishly beautiful.  They offer a great many compliments, and expect a great many in return.  They are also fairly worldly, and many expect hospitality to be offered to them.  Elven demons are tremendously ugly.

Orcs have no angels, only demons to torment them.  Their demons sometimes resemble the other races.

Merfolk angels resemble edible fish, and are themselves edible.

Goblin "angels" (of the goblins who worship the False God) resemble goblins with wings made from wires and trash.  They have no powers, no special knowledge, and are mechanically indistinguishable from normal goblins.

Druidic angels are all fucking bears.  So are their demons. 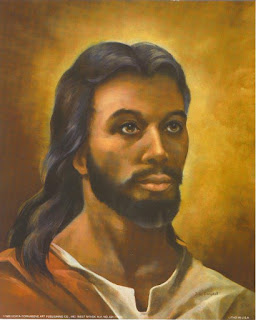 How to Use Foreign Angels

Like all angels, they're sent to help the good guys.  But the cultural gap can be huge.

Maybe the party is supposed to seal a demonic portal in the Underworld, and the cleric prays for assistance.  A dwarven angel is nearby, hears the prayer, and decides to show up.  It casts (a morally relativistic version of ) detect evil and sees that one of the party members donates their money to people they don't even know, and another of them is only interested in knowledge, not money.

If the party can convince the angel that they are good, greedy, and hardworking, it might help them out.  It'll probably just leave, mildly disappointed and disgusted by the party's vulgar display of unrepentant sin.  It probably won't attack them (angels, on average, tend to not be total dicks) unless the party pisses it off by casting ESP on it, trying to pick its pocket, or arguing theology.

Maybe the party is in an abandoned Elven rocket-ship tree and they pray at an elven shrine for assistance clearing out all the orcs.  An elven angel shows up and nearly vomits at how repulsive the party is.  None of them have a Charisma above 15.

But the angel is a professional, and made certain Oaths in the name of Authority.  Besides, it hates orcs, so it negotiates for a little while.

It wants to challenge mortals to testing their skills, so perhaps it will ask the party to go through the dungeon in a more difficult way.  Or challenge them to fight a certain monster in a duel, rather than a group fight.

"You are skilled with a blade, are you not?  If you were truly excellent, you would walk up to those orcs, naked except for your weapon, and challenge their leader to a duel."  or  "Orcs are truly miserable creatures, worth your contempt.  A party of elves could kill all of the orcs in this building in less than an hour.  If you could do the same, I will open the door to the basement, and you can perhaps claim some weapons of the Elven ancestors.  Though you cannot escape the ugliness of your race, there is no reason why you could not bring your skills to an elven level of prowess."

This angel usually manifests as a dwarf with gemstone eyes and enormous badger claws.  It's dirty, muscular, and has a soothing musky scent, like lumberjack beard.  It's belly is fully of dark soil and silver nuggets.  It exists to help dwarves overcome the obstacles that would prevent them from achieving the object of their greed, or to reassure them if their greed should waver.  They strive against evil (lazy dwarves who aren't greedy)

Digression: a strange bureaucracy of heaven seems to be emerging where dwarven angels oversee dwarves and hold them accountable to dwarvish morals, human angels oversee humans and hold them accountable to human morals, and everyone bows to Zulin, Prince of the Upper Air, Servant of the Authority.  How does this work?  Can a dwarf convert to human-flavored Hesaya?  Are the angels of one the demons of another?

<Unworthy Wealth>  10% of a character's metallurgic wealth combusts (gold, silver, copper, etc).  (5% on a save.)  It does X holy damage to them, where X is equal to the square root of the wealth that was lost.  (So if 100gp were lost, the character would take 10 damage.)  It can do this ability once per round as a free action.

<Mine> Whenever a beneficial magic effect occurs within 100', the Angel of Greed can copy it onto itself.  (This applies to healing spells, as well as healing from potions.)

<Spells> Can give a person a permanent version of find the path so that they will always know how to get to the thing that they want.  Can give away one of those extradimensional chests that is summoned/dismissed by waving the key around.

This angel usually manifests as an extremely tall elf, clad in a shapeless cloak of leaves in which diminutive birds-of-paradise nest.  Flowers trail behind it, and the whole world seems to be more beautiful because the angel's sense of magnificence, but also uglier by comparison.  When it is in the room, all other beautiful things are not beautiful.  Not your lovely young wife with Cha 18, not the naked nymph (whose beauty-based abilities would also be suppressed).  The Angel of Pride has no Charisma score, because (a) that would be enough to heretically suggest that it's beauty is finite, and (b) it's Charisma is ineffable.

It wants creatures to be proud of what you are good at.  It wants everyone to strive to be better, more skilled, more beautiful, more exemplary.  It wants you to love yourself, and love that excellence within yourself.  And it wants you to ignore anything to the contrary.

It leaves most groups wanting to take a bath and buy some exfoliating skin cream.  It fights with a rapier and a halo of bird-of-paradise feathers, which dart around like arrows, or like hungry minnows.  It can probably also turn you into an ugly little bird, like maybe a kiwi or a small wood duck.

<Perfection> As long as the Angel of Pride is at full health and hasn't embarrassed itself, creatures who want to attack it must succeed on a save or be compelled towards admiration.  Once it takes damage, the illusion of perfection is ruined and you see it for what it is: a vastly superior creature with immaculate skin, otherworldy grace, and incandescent beauty.  The person who kills it must make a save or fall into a deep depression that lasts until the end of the day or until they get a positive emotion effect.  While in this fugue, they won't want to do anything except mope and apologize to the angel's corpse.


<Look Down Upon> Each time the Angel of Pride is damaged by a filthy mud-creature, it reacts by growing 1d6 feet taller and more beautiful.  (The ceiling grows to accommodate the angel, if necessary.)  It casts command as a free action.

<Eloquent> When it talks to you, every sentence is a suggestion.  When it smiles, save vs charm.

<Boons> Gives away a permanent +1 Charisma to whoever has the most Charisma already.  Give away a suit of elven mithril +1 that can glamour itself into a party dress/tuxedo, but all of this sweet magic only functions while the wearer is at full HP.  Gives a ring of glamour to whoever is highest level that also increases XP gain by +5% or something.  Maybe give you a really racist magic sword that only obeys you as long as you kill orcs and don't take orders from ugly people.  Gives the whole party a blessing that they can expend at any time to double their bonus to a roll (so the people who are already good at something get extra better).

(Dwarven) Angel of Toil (the value of hard work, and lots of it)

(Elven) Angel of Sloth (wants you to rest, take care of your body, get other people to do it)

(Elven) Demon of Chastity (bundled up in many layers, full of STDs)

(Orcish) Demon of Mercy (spare the child and spoil the horde)

(Orcish) Demon of Peace and Agriculture 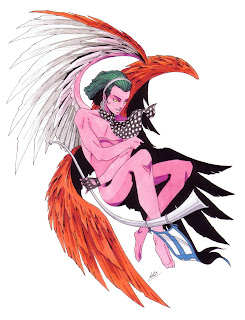 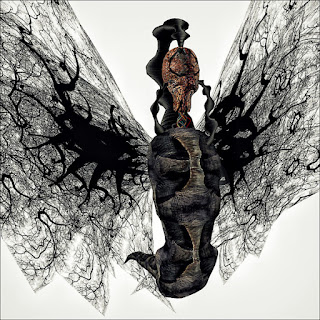 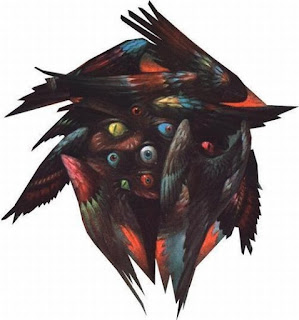 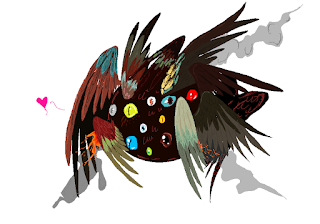 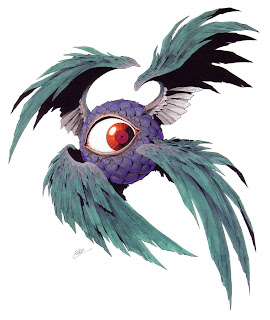