Why not have regional variations of each of the four basic classes?  Regional subclasses.  Like in one part of the world, fighters train in this style, and in another part, they train in this style.  Maybe not all the fighters in that part of the world, but perhaps most of the fighters.  Or perhaps that is the style of fighting that they are most known for, even though few people actual practice it.

It gives a map a different kind of texture that players will care about.

If I wrote a bunch of these, it might just be a book of alternate classes.  You don't need to restrict player choice when it comes to these classes BUT YOU COULD.  There could be two levels two character generation: the first one when the gaming group decides where their adventuring party is from (which determines which classes are available) and a second one when each player decides what class they are from.

It allows a group of players to create a party that is already identified with an organization or a group within a part of the campaign world.  They are born complete with affiliations and motivations.  I like that.  Born with hooks in 'em.

One thing that unites all of Centerra is that they all bow (to varying degrees) to the Reincarnated Prophetess and the Holy City of Coramont.  This support is paid not through money (that was condemned by the Prophetess) but through personnel.  A great deal of talented people assemble in the name of Coramont and then set out to work in the interest of the Church or the free people of the continent. 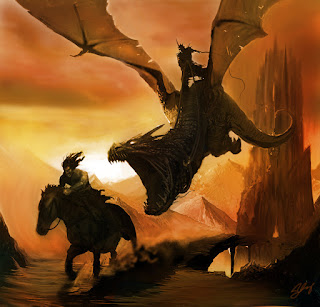 The Kingdom of Kaladar

When I first started writing Centerra stuff down, I decided that there would one vanilla, generic, white-bread place somewhere on the map where I could stick all the knights and dragons and damsels and people with names like Goldenloin and Lionsbreath.

That place is Kaladar (formerly known as a bunch of other names that all started with K).

It's basically a generic Camelotoid except for: 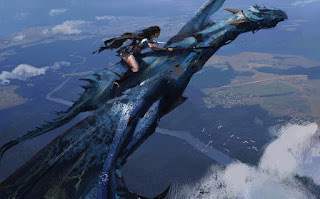 Oh man, everyone thinks that it's so great to be a dragon knight.  Ride dragons into battle, be a bad-ass.

Well, I got news for you.  It sucks.  Compared to his mount, a dragon-rider is about as badass as a rat riding a wolf.

Because think about it.  Between a man and a ten-thousand pound killing machine, who do you think is going to be in charge?  That's right.  The dragon is the boss.  All the dragon knight does is protect his neck with a shield-lance (the only really vulnerable part of a dragon) and try not to vomit during the acrobatic parts.

If you don't clean Sir's scales perfectly by the time he wakes up, you're fucking fired.  He'll get a new squire faster than you can say 'flambe'.  There are a lot more dragon-knights than there are knight-dragons.

Some dragon-knights are wizards.  They specialize in divination and communication spells.  They're basically the knight-dragon's radar and comm systems. 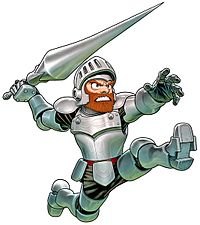 Keldon is the Generic Fantasy Kingdom so of course it has Generic Fantasy Knights.  I f igure the fun thing about being a knight is the knightly character, and how the knight fits into the rest of the world, not so much the mechanics themselves.  They're interesting in the same way that a paladin can be interesting. 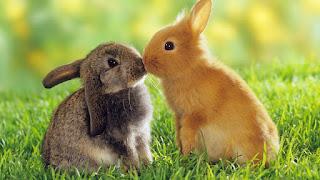 The Black Rabbits are a family of wererabbits loyal to the king.  They were formally a powerful cabal of thieves until they were captured and threatened with execution.

In time, what started out as a forced relationship (the king held many members of their family hostage in his household to ensure their loyalty) has turned into a convivial one (many of the Black Rabbits have now married into the royal family).

There is a secret place called the Royal Warren.  It is full of rabbits, and the rabbit king lives there.  The black rabbit family has intermarried into this royal family, too.  (And some of the Black Rabbits are married to a rabbit princess and a human princess, neither being aware of each other.  Rogues, right?)

The Black Rabbits aren't common knowledge, but people in Kaladar know not to fuck with rabbits.  Fuck with too many rabbits and you end up buried in five different burrows in five different counties.  They're rabbity ninjas.

The Black Rabbits manipulate a lot of things in Kaladar.  They're the only reason the dragons are still in power, for example.  The dragons are powerful and immensely good at focusing their attention at a single big task (like leveling a kingdom) but they are basically blind when it comes to noticing things that aren't shiny, shouting, or waving a sword in their face.

There's a part of Kaladar called the Plentymore Plains, named after their fertility.  It's full of big networks of farms built around hub-towns, each one about a day's travel from each other, like what actually existed in the medieval ages.  It's entirely safe to travel through as long as you don't ask questions or open any locked doors.

Saint Borgaine is sort of the anti-druid.  Forests are evil; parks are good.  Forests must be pushed back and tamed until future generations think of forests as someplace peaceful and relaxing (because that is true victory over the wild). 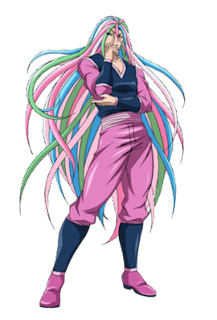 So there's this space dragon called Forganthus Valore.  Centerra holds nothing that he desires, except perhaps some tasty food.  But not just any food.  He needs a stew cooked to his specific specifications--which are so exotic and precise that it usually takes about a hundred years to assemble and cook them all.

So Forganthus shows up every hundred years or so, eats a huge stew brimming with exotic flavors and impossible alchemy, gives instructions for the next stew which is to be served to him in 1d20+90 years, and then flies back into space.

In exchange for this stew, Forganthus answers questions.  He was alive prior to the Time of Fire and Madness, and knows the truth about the elves.  He doesn't see the future, but he's a hell of a prognosticator (and gives really good stock tips, so to speak).  He has two heads; one eats while the other answers questions.

Example ingredients: Three black goats, each born with a third eye.  The tear of a laughing angel.  The laughter of a man who has destroyed what he loved most.  Ten thousand mermaid hearts.  Basilisk blood boiled with butter for the last three years.  A furball coughed up from a calico cat.

And Forganthus has a delicate tongue.  Delicate enough that he could taste the difference between a hairball from a calico cat and a hairball made from the mixed hair of different colored cats.  That little fuckup cost Kaladar 60,000gp (for the new tower) and a princess (which was kidnapped and never replaced).

The particular little branch of the royal Kaladarian* apparatus that is in charge of overseeing this stew-dragon-prophecy business is the Stewer's Guild.  Except for the dragon families (taken as a whole), they are the most powerful force in Kaladar.

*Ye gods, it sounds even worse as an adjective.  I love it.

They are composed primarily of alchemical chefs, but their numbers also include some bureacrats, mercantile speculators, historians, spies, and seers.