Bards are a service that the players can (and should) seek out in town, similar to how they seek out sages and alchemists.  They usually offer the following things: 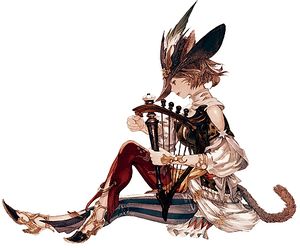 Bards talk to a lot of people.  Specifically, they talk to the kind of people that adventurers are most likely to be interested in: tomb robbers, travelers, law enforcement, and one-armed Joe.

This means that they can be convinced to part with some of their knowledge.  Want explicit knowledge of where the dungeons are?  Done.  Want to buy some rumors to go along with those dungeons?  Done.  Pay even more and you might even get some higher quality rumors that the bard knows to be true.

The party might pay in coin, but they might also pay in information themselves, but it has to be the stuff that bard is interested in.  A rival adventuring party looted a legendary sword and used it to kill a a paladin of Saint Ferragun?  That's juicy stuff.  The ghost in the mine moaned the king's name?  Tell me more.  Stories, in a word, not just mere information.

I like this because it quickly tells the party where adventurin' is to be had.  No pussyfootin'. 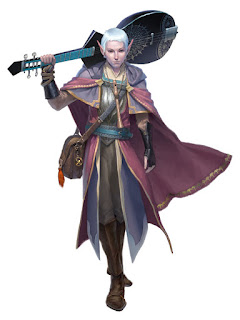 Want to keep rival adventuring parties from looting the newly discovered dungeon out from under your feet?  Spread rumors that it's empty except for dust and the deadly dickrot disease.

Want to get invited to a fancy party?  Spread a rumor that you killed the hydralisk that was menacing the local swamp (even when you didn't).

Want to keep the local law enforcement off your back for a short while?  Spread a rumor that someone saw Kesselgrave in the nearby swamp, pulling the heads off bears. 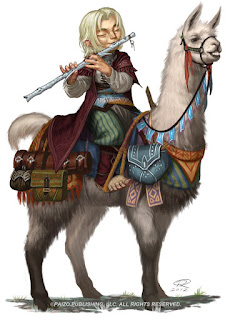 This is getting into story game territory, but bear with me.

Basically, the party asks the bard to tell them about a dungeon that they haven't heard of before, and then the DM asks the group to provide the details about the dungeon.

So the DM asks about what dungeon do they want to hear about, and they're like, let's hear about the sunken tomb of the pirate wizard.

Then the DM rolls their eyes and asks about what treasures are in the dungeon ("Why, I didn't know anyone else had ever heard of the sunken tomb!  It is a tale believed to be false by most.  What hast thou heardest?") and the players are like, a magic boat and a telescope that can teleport you to wherever you're looking.

Then the DM asks about what sort of deadly perils the dungeon holds, and the players are like, barnacle men, zombie sharks, ghost-possessed treasure, and lots of cursed gold that you really don't want to touch.  ("Touch no coin of the pirate wizard's hoard!  Because they are all cursed, each and every one!")

Basically, you just design an outline of a dungeon with the party, bouncing ideas off each other.  Especially pay attention to what they are most excited about, and what they don't want to have in the dungeon.

And then the characters pay the NPC bard for the honor, and you go off to design that very dungeon in between sessions.

But here's the kicker--everything that you just established about the new dungeon are just rumors, which means that they can be true, false, or anything in between.  You can even roll for their veracity if you want, in a pleasant inversion of how things normally work.  (I like a rumor table that is 70% true, but I also think that this should be influenced by how much they pay the bard.  Cheapskate the bard, or threaten him, and the bard will tell you more lies (50% true), but pay off the bard very well, and he will tell you the secrets that he promised not to tell anyone (80% true).)

In a way, it's like the payers paying GP in order to play as the bard, who is playing as the DM.

And then when the players get there, give them the dungeon they wanted, more or less.
Posted by Arnold K at 1:29 AM