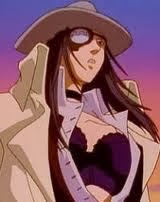 Still working on the Land of Flowers.  It's gonna involve sailing, and the best part about writing encounter charts for sailing is the pirates, obviously.

You know how people are always calling pirates Foobeard or Plunderbeard and shit?  Centerra has a similar convention.  Boy pirates often take the name of Jack, and lady pirates often take the name of Jane.  It's common enough that "jacks and janes" usually refers to a pirate crew, but the captains rename themselves so its totally literal for them.

I've included their ethnicity.  A lot of them are marinel, because they're the seafaringest race. 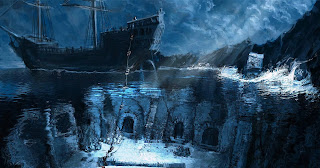 
1. Onion Jack
An Afner (halfling) famous for his accurate slingshot, enormous ballista, and tendency to boil unpleasant people in oil. He values ignorance above all things, and is fond of saying that nothing in books compares to the experience of life. He is kind to children and cruel to scholars. His ship is The Golden Bee and his flag is an onion.

2. Prickleback Jack
A darklander famous for his long dreadlocks, each one stiffened with fats and tipped with a different blade. He fights with a hooked pike and his battlecries can carry over a mile of water. He never travels with a few barrels of mosquito larva, his favorite food. His ship is The Dancing Bear and his flag is a hedgehog.

3. Jack Mox
A former slave, Jack Mox is an pale man (Gilean) in pale clothing, known for his extreme cruelty to slavers and their ilk. He's known for his bizarre speeches on democracy, free enterprise, and the cure for slavery (wealth). His ship is The Liberator and his flag is a pair of manacles around a diamond.

4. Jack the Moonbeam
A bisexual and hopeless drunkard (Marinel), there is a 50% chance at any time that he is unconscious in his hammock. While awake, he is a powerful magic-user. His favorite tactic is to bewitch his opponents, forcing them to jump into the water where a trio of charmed sharks circle. His ship is The Urchin's Revenge and his flag is a crescent moon beneath the waves. 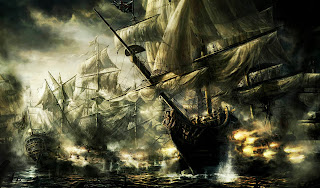 5. Kill Again Jack
A pirate with a lame gimmick. He first time he runs into you, he lets you go. The second time he runs into you, he kills you. He's a huge, blackish man (Lassic) who has lost a hand. In combat, he fights with a held harpoon and a bolted on axe. He's an idiot, but he's a dangerous idiot who fears being made a fool of. His ship is called The Devil's Tooth and his flag is a pair of skulls, one smiling, one frowning.

6. Lightning Jack
An exceptionally lanky man (Marinel), he is exceptionally proud of his long ponytail, ringed with gold bands and seashells. He prides himself the best swordsman on the ocean, and loves dueling and whoring. He is involved in a back-and-forth with the Patriarch of the Church, and the two men are constantly exchanging angry letters. His ship is The Firestarter and his flag is a trio of lightning bolts.

7. The Invisible Prince
He's permanently invisible as a result of some adventure he went on in his youth. Following theme, his ship is small and camouflaged. He walks around deck naked, or wearing an enormous hat. Many are hunting him, hoping to learn the secret of invisibility. This has made him famously paranoid, and he has developed several verbal tics from the stress. His ship is The Lacuna and his flag is a black rectangle with a hole cut in the center.

8. Djanza-Town Jane
She's a tiny (4'9”) woman from Djanza Town (Bashani). She's a passionate pirate known to be afraid of ghosts. She is impatient, imperious, and has a lover in every port. In fact, her numerous boyfriends may be a bigger problem than herself. She carries a crossbow, a rapier, a magic throwing needle (1d4 damage and never misses), a garrote, knock-out gas ampules, numerous poisoned rings, and a half-dozen daggers. Her ship is The Cure for Honesty and her flag is a flaming skull with dice for eyes. 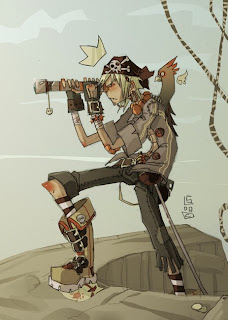 9. Churchdoor Jane
She's a huge (6'1”) woman from Kaskala (Lassic). She's a widow and a devout Hesayan (although a believer in the Pirate Heresy) and hates Noth for the conquest of her own homeland. She sleeps atop a pair of mattresses atop a church door. She has a complicated backstory, and believes that she would be a saint were it not for corruption within the church. Her ship is The Heavenly Vessel and her flag is Hesaya's holy symbol beside an inverted one.

10. Carvanu the Nine-Eyes
A woman (Bashani) from the desert nation of Abasinia. She wears a tall white hat and cape. She has had a bracket mounted to her skull that she uses to attach a dazzling array of telescopes and lenses. She is a crack shot with the crossbow and the ballista, and is always hunting for trophies to bring back to her family in Nalta. Her ship is The Handsome Devil and her flag is a 3x3 grid of eyes.

11. Iggy the Freak
She (Marinel) has the most fearsome hair on the Sea of Fish. Her boat is painted neon colors, as is her body. Her brilliantly-hued crew contains members of every race, including a Lykorian (sort of a race of 7' tall wookie intellectuals with no visible faces, survivors of a sunken city). Her crew indulges in all sorts of depravities; beginning with everyone as a singular color and concluding with every sailor a rainbow. Her catamaran is the fastest thing on the sea.  Her ship is called The Vicious Circle and her flag is a unicorn.

12. Calico Kill
Captain Kill (Marinel) is the Pirate Queen. The bounty on her head is worth a king's ransom, and she practices piracy with absolute impunity. She has a small fleet of eight other ships. She has survived a hanging and two other near-death experiences, and it is said that the Kraken owes her a favor. Her ship is The Cat's Paw and her flag is a dead bird. 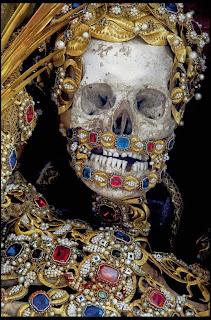