So I read through Jack Vance's significant corpus this year. It was very edifying.  And satisfactory to finally be reading some Appendix N material.

Why if, you all knew how shallow my Appendix N exposure truly was, you'd punch a hole in your computer screen, break your keyboard over your knee, and urinate all over your hard drive. Then you'd put all of those things in a box, fill it with ox blood and the chimneysweep's curse, and mail it to me.

That's the singular reason why I don't post my address online.

Anyway, Jack Vance is awesome.  I get the appeal of Vancian magic.  I do, I really do.  It's a fantastic storytelling device.  Chekov's ammo, really.

Nowhere does he have spell levels. Vance's wizards are more flexible than that. 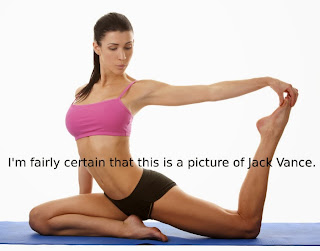 So here's my idea: a more flexible Vancian system. We take over the government and collapse all of those big Spells Per Level Per Day tables that wizards have into a Flex-points Per Day progression.  We'll call it MP for Magic Points, and they can be used to prepare spells of any level.

This is how we can convert the existing magic-user charts into equivalent MP-per-level.

I know, in my heart of hearts, that this system is flawed.  Spell power isn't linear.  A trio of level 1 spells are not as useful as single level 3 spell.  But it's close enough, to make this interesting, right?

We'll never know unless we try.

Let's start by looking at S&W and LL and adding up all of their spell ranks on a spreadsheet. We'll add in the spell progression from 3.5 as a control group, to see how much the game has changed in 30 years.  The "Goblin" column is a progression of my own devising, but I'll come back to that.

So this looks interesting.  3.5 style spell progression actually creeps up the highest of the three in the middle, but ends up limiting itself at the last minute.  LL and S&W seem to parallel each other nicely, at least in this respect.

(Also S&W spell progressions are a little weird.  I know they were drawing on the ancestral genome when they drafted themselves, but wow.  Also, S&W is all about giving you lots of mid- and low-level spells, while being very frugal with the level 7-9.  Seriously, as "low" as level 16, you can cast 5 spells from every level 1-6, but still no level 9 spells.  You never get more than a pair of level 9 spells.  Conversely, high level LL gives you more spells in the 7-9 range, but fewer in the 1-6. Is this important to anyone??? Totally yes.)

I was pretty excited by all of this thinking about spell progressions.  To be honest, I was getting a little sweaty. So I do what I always do when I get sweaty: make some graphs. 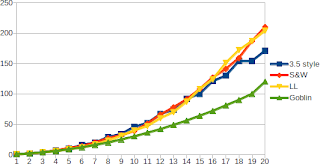 Then I made a semi-logarithmic graph and zoomed in on the areas of interest. You can sort of see the wiggles in the different lines.  Also noticeable is how the 3.5 graph jumps in power every other level, a product of it's extremely regular intra-spell-level progression. 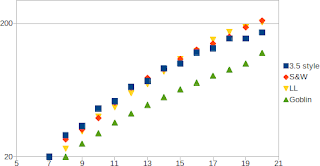 Anyway, if you actually played a wizard using flexible MP, it would be a pretty big advantage to be so flexible (everyone go do pilates).  They'd be able to prepare a shit-ton of level 1 spells if that is what the day required, or just prepare a handful of their highest level spells.

So, a compromise was needed.  I made my own MP progression.  It's up there alongside the others, labeled "Goblin". Unlike everyone else's weird squiggly lines, my progression is mathematically perfect all along its length (except at level 20, where I gave them +10 MP, because level-fucking-20).  It's also yields a lot fewer MP than the other 3 alternatives.  Which is appropriate, since you are trading quantity for flexibility.

Vancian? I think so. Rhialto doesn't roll up with a bunch of Magic Missile and Hold Portal. No! He brings 5 big-awesome-sexy spells that are all gamechangers (and coincidentally appropriate) over the course of his day.

But can we make it more Vancian?  Can we give the class even fewer MP so that they'll only cast handful of spells?  And give it a stupid name?

Hit Die: d6
Armor: as Thief
Weapons: as Thief
Attack Bonus: as Thief
Everything Else: as Magic-User

The Vancomancer learns, prepares, and casts spells in much the same way a Magic-User can (including the spell levels that are accessible).  However, a vancomancer is not limited to any particular number of spells per day of a particular level. Instead, a vancomancer has a pool of magic point (MP) that they expend each morning when they are preparing their spells. It costs a number of MP to prepare a spell equal to the spell's level.

At the same time, they're slightly less useless in a fight, with a little more hp and attack bonuses.

I feel like Vance's wizards only wore huge robes because of how comfortable and luxurious they were. Sort of like lounging around in gilded pajamas. The whole "wizards can't wear armor" thing seems to be an exercise in niche protection. Or maybe people just like the preserve the iconic glass cannon.

But heck, even Vance's wizards swung weapons with some alacrity. Gandalf had a sword!

Alright, I feel justified enough.  I can hit the submit button now.
Posted by Arnold K at 1:34 AM