Escape from the Gladiator Pits of the Yoblin Kings

So it looks like I'm going to be DMing for some first timers, which is fucking awesome. I love introducing people to my hobby. But here's the thing: they want the "traditional DnD experience" which apparently means fighting goblins.

But I'm going to use my funky fungal goblins and make it into an introductory dungeon-module-thing.

I'm going to call it Escape from the Gladiator Pits of the Yoblin Kings.

Because you only know the title and you already know what it's all about.

Yoblins were the my very first monster that I ever felt ownership over, so it'll be nice to start the first dungeon with the first monster. They have a wonderful lifecycle: 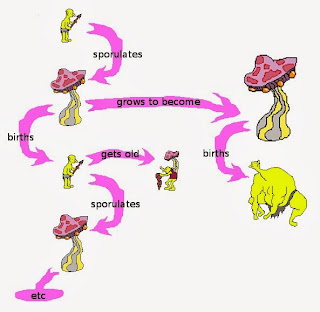 It's called Escape but really you can either start as (a) gladiator slaves of these horrible fungus fuckers, or (b) you can start on the outside and fight your way into rescue the slaves.  It should work either way.

It's a dual city, split between two tribes of yoblins (and an unaligned witch).

If you start out as slave-gladiators, the game begins in media res, fighting. . . I dunno, psychic porcupines or something. When they get back to their pen, they get to meet their fellow gladiators.

Harmok the Trollslayer is a one-eyed dwarven berserker (F2).  He's well-spoken when resting, but he flips the fuck out in combat and kills everything.  He's even killed allies in this bloodlust.  Despite his uncontrollable battlerages, he's also the only one whose been here more than a month, and he knows his way around.

Yami Yaga is an elven witch (MU1).  She's soft-spoken, languid, probably evil, and obsessively cleans her feet.  She prefers to sit away from the party, and will never consider herself a member of their group.  Around her neck, she wears her dead familiar, a raven.  She has sworn revenge on the yoblins but will not hesitate to abandon or kill the party.

Papon is a Brynthic spearman (F1), braved and bearded and far from home. After he watched all of his spearbrothers die in the arena, there was no one left who spoke his language. This has made him broody.

Stomper, who's real name is Kepler, is really just a boy.  He's not a minute more than 16.  He's a consummate thief (T1).  The yoblins cut off his legs, but they gave him a little cart to wheel himself around on. He cracks a lot of jokes, despite having no legs ("I bet I can do more chinups than you!") and keeps trying to befriend the gloomy Papon.

Anyway, the whole thing takes place during the Festival of False Gods.

Basically, this is just the yoblins throwing a 3 day party while making fun of everyone's gods.  Expect to see comedic retellings of all of the rest of the world's religions. 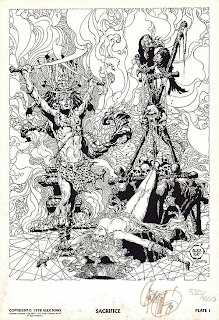 Anyway, the party can escape whenever they want.

This is because Stomper has already stolen the key to their cell. The only question is when do they want to attempt their break out.

If they attempt their jailbreak immediately, the town will be full of yoblins decorating and moving around.

With every day of the Festival that passes, the goblins will get increasingly drunk and slovenly. Guards will leave their posts to go eat fried rats with their families. Merchants will be less likely to investigate the disappearance of their silk rope.

However, there are also gladiatorial matches every day of the Festival that the players are expected to be a part of. Every day they linger is also a deathmatch that they have to take part of in the yoblin coliseum. If they fight through all three days of the festival, the yoblins will be at the pinnacle of their drunkeness, but that's three potentially deadly fights.

Metagaming, this is my way of asking the players how much they want to balance combat with sneaking around.

The three day festival concludes with the visitation of Fingle, ("All gods are fake, and Fingle is the god of all gods."), who is clearly just a bunch of yoblins in a shoddy costume.  Fingle goes around the crowd, giving his blessings and devouring the unfaithful, who disappear into his muppet-like mouth.

I'll add in some rules for sabotage and subterfuge, even while imprisoned.

The city is called Yakratuga and the two kings are Hodag the Demonslayer and Gorp, Son of Gorp. Hodag is sort of a pissed off cross between a yoblin, a death knight, and Judge Dredd.  Gorp, Son of Gorp, is morbidly obese and doubles in weight every couple of years.  He's also a potent wizard.

The other party in the city is the Hogwitch (who uses undead pigs as spies, by skinning them, filling the skin with explosive gas, and sending the horrible pig balloon to go peek in windows with its stitched-up eyes; and other piggly magic both bilious and vile). 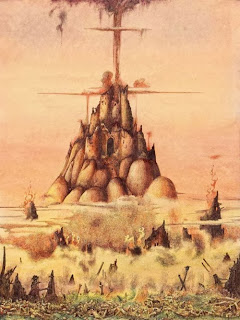 Now I just gotta come up with about 50 locations and all the important NPCs and their little plots and some unique magic items.  Should be a cinch.

I also plan to use a mutant form of this table.
Posted by Arnold K at 4:04 AM