One big difference from old school DnD and younger forms is the weight that it gives stats.

That is: how much STUFF does the Intelligence stat actually do in your system of choice?  How many pieces of the mechanics does your Strength stat touch?  Obviously, the trend through different editions of DnD has been for stats to carry more and more weight.  But why?

This is sort of a complicated question, and it lies at the heart of the different design philosophies.  Here's a pie chart for credibility. 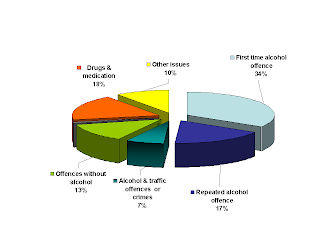 When you give ability scores more weight, you make them a lot more important.  This makes characters more stat-dependent (instead of class-dependent, feat-dependent, or maybe even player-skill-dependent).

This funnels DIRECTLY into how the players approach the game.

Games with "heavy stats" tend to offer (and require) methods of generating stats that give more consistent stats and more freedom to arrange them however you like.  I'm not just talking about DnD, but that will be my example because that's what I'm most familiar with.

In 4th edition, a Level 1 Dragonborn Paladin might have stats (default array, racial bonuses) will have stats that look like 18 Str, 13 Dex, 12 Con, 10 Int, 11 Wis, 16 Cha.  He is a hero BECAUSE of his excellent ability scores, and he excels because he is born awesome.

In 1st edition, a Level 1 Human Thief might have stats (artificial 3d6) that look like 7 Str, 14 Dex, 9 Con, 10 Int, 8 Wis, 12 Cha.  He is a hero DESPITE his average ability scores, and because he learned to be awesome through experience.

Why choose one over the other?

When designing a class for 3.5 edition (for example), there's an unspoken sense that "characters who have the higher appropriate ability score should be better at class features than ones that don't".  It makes sense, on it's own level.  After all, that's where INDIVIDUALIZATION and CUSTOMIZATION come from, right?

The problem with that, though, is that stats become so important that the effective character builds tend to cluster around narrow builds, removing the customization that it tries to encourage.

Using a 4d6-drop-lowest during chargen has a smaller standard of deviation than 3d6.  You're removing randomness when you use a 4d6-drop-lowest.  You're creating more homogenous characters, not more vibrant ones.

I'm not trying to bash 3.5.  There's are advantages to have a system where the stats carry a lot of weight.

-If you want to have a system where you can easily generate super-powered characters using the same system, a "heavy stat" system can be advantageous.  It's easy to stat up a level 1 Hercules--just give a level 1 Fighter a Strength of 30 and watch all of the other numbers on the character sheet adjust automatically.  (On the downside, you might struggle with figuring out what adventures are most appropriate for a level 1 Hercules.)

-Corollary to the last point: if you want to have a second type of scaling aside from level, you could benefit from "heavy stats".  It's easier to pair up a level 1 Hercules beside a level 6 spearman, for example.  B/X DnD might just say that Hercules was born a level 6 Fighter and leave it at that.

-It's also an advantage if you want to build monsters according to the same system as player characters.  If you're exceptionally worried about balance, this can help allay some of those fears.

-Limiting multi-classing/protecting each classes "niche".  There's less reason to multiclassing into Thief if all the Thief abilities are tied to Dex and your Dex is 9.

There's also some advantages to having a system where the stats don't carry much weight:

-Multiclassing isn't so fucked. A magic-user/fighter can still be viable at higher levels in older versions of DnD (whereas they tend to suck in 3.5, for example).

So when you're building your own retroclone or whatever, think hard before you start putting "+dex mod" all over the place instead of "+2" or "+class level".  Think about how much weight you want your stats to carry.  Should strength extend to carrying capacity?  To-hit bonuses?  Melee weapon damage bonuses?  Bending bars or other skill checks?  All of the class abilities?

The right answer depends on what type of game you want to make.  Your stats can either be "the foundation upon which everything else depends" or "the stuff that used to matter before I gained my first class level".

Conclusion: This is a pretty shitty essay, but you system-builders should still think about why you factor in ability scores when you do.
Posted by Arnold K at 12:38 PM

Email ThisBlogThis!Share to TwitterShare to FacebookShare to Pinterest
Labels: boring, system, why do I write these fucking things