Three Things and How They Died 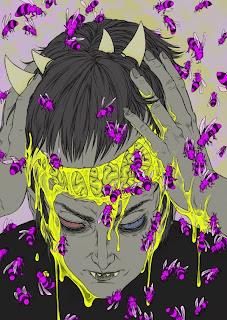 They filled her mouth with daffodils and cleaned her face of dirt.  They placed her palms together and even retied her shoe.  They hemmed her ragged corners in and closed her misty eyes.  They loomed above her body like mirages, their shoulders pressed against each other, huddled from the cold they no longer felt.

Dismembering and remembering was all that they knew, and those were like nothing at all.

The nape of his neck broke the water every four minutes. The seconds in between were filled with constant movement. The ocean's soft suction against his skin. The insistence of the whirlpool, that spun him around to face the black rocks and then the sinking ship and then the black rocks again. The reassuring bump of the sandy bottom that dislodges the harpoon.  He would be here for less than an hour before the slugs found him.  Their barrel mouths would mince him with pinecone monotony.

Truly an object, now. Pulled apart and spun like fine flax. A few seconds ago she was an adrenaline respone and inviolate skin and bloody engine, beating faster faster to be this far down. But suddenly seized and teased apart by quantum fingers and the molecular loom. Thus decanted, her fibers were whisked down invisible arterioles. She traveled a hundred miles in every direction at once. Discrete tongues tasted her and, having recognized her, pointed their noses into the ether.
Posted by Arnold K at 3:37 AM