West of the Yoblin Kings, there is the Rancid Ravine, a big, ancient canyon-cave.  Shovelheads hunt glowbats n the stony ceiling, and the mushroom paddies grow among the flooded stalagmites of the ravine floor. Half a dozen rope bridges criss-cross this canyon, clinging precipitously to the walls of the cavern. Sulphur vents in the south pump bacteria-rich sludge into the cavern, providing a valuable influx of biomass. Clouds of minuscule saltflies buzz over this nutrient-rich slime, ignoring all other creatures.

It has a few secrets and a lot of wildlife, some of which can be found nowhere else in the world. One of these rare creatures is the Tubular Peacock.

Tubular Peacocks are descendants of marine slugs.  They have a tubular head that bifurcates into a pair of body-coils.  It grows in a spiral, like a snail. Among other things, this means that its two anuses exit onto the sides of its body.

It eats by swallowing a tubefull of bacterial sludge, filtering it, and then vomiting the non-biotic elements back out. It is also one of the few creatures that can safely eat green slime, which it relishes.

Like peacocks, the males are garish and extremely territorial while the females are dun and shy.  The males trumpet sonorously (a bit like roosters), and their calls are a familiar elements of certain underground biomes, such as sulphur vents and thermal muds.

Its tiny eyes are atop soft, horn-like stalks, and each half of its body is ringed with long, hydrostatic stalks that look a bit like wings, which it uses to swim atop water like a weird-ass duck.  The only real endoskeleton it possesses in its hips and legs, which are analogous to a heron's.  Each leg is tipped with two soft "fingers" and a single, calcified claw. The razor-sharp 5" claw has disemboweled many unwary adventurers, and they are commonly made itno daggers among subterranean dwellers.

The males' brightly colored bodies (there are several different phenotypes) and are frequenly made into garish hats.  And of course, the creature is sometimes made into bags that can be used to safely transport green slime (though it loses this ability in only a few months). 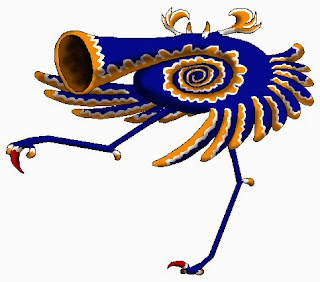 
Barf. Once per day, a peacock can vomit in in a target's face as a ranged attack, causing pain and blindness until you take an action to wipe off the crud (usually a mixture of bacterial sludge and gritty silt). If encountered in its native habitat (underground), there is a 2-in-6 chance that its stomach contents include green slime, which adds to the barf's effects.

Female Tubular Peacocks have the same stats as the males.  However, they have morale 8 (unless they are protecting their nest) and likely to hide/flee when encountered (unlike the makes, who are extremely aggressive).

Green Slime
Green slime is an immobile green slime that is found on subterranean surfaces. It devours both plant and flesh with terrifying alacrity, and even a few drops can liquify an adult human in seconds.  This process creates a lot of waste products, but also a fresh crop of green slime.  It can crawl a few inches per minute, seeking food. It is fond of ceilings, where it can sense animals beneath it and then drop down.  It is instantly destroyed by bright light and fire.

Green slime does 1 damage per HD per round of exposure. This continues until you are devoured or until you spend an action scraping off the carnivorous ooze, which only succeeds if you roll under you Constitution. Using large amounts of water gives a bonus on this check, and sticking the affected limb in a fire automatically succeeds.

One of the few things that can be used to safely transport green slime is glass bottles with finely ground glass stoppers. Possession of green slime in civilized areas is usually a capitol offense.
Posted by Arnold K at 12:54 AM