Encounters on the Sea of Fish 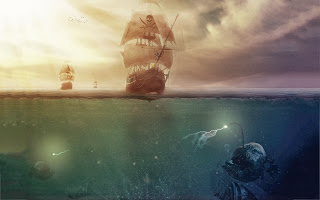 Because I want to eventually put together a Land of Flowers campaign, I probably need some tables for the Sea of Fish, which you'll probably be sailing back and forth across to reach the Land of Flowers.  It's a big, subtropical sea comparable to the Caribbean, and full of interesting shit.

The one exception is the Kraken, because if you run into the Kraken, all the metagame knowledge in the world won't affect the outcome.  So I guess I can tell you about him. 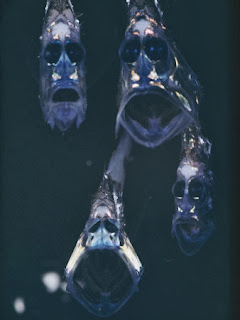 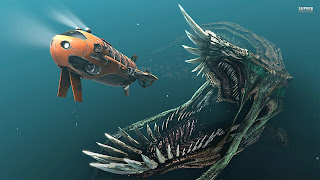 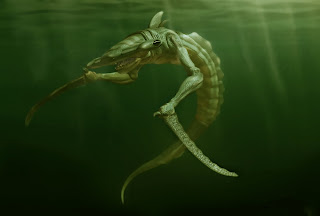 1 Dolphins
2 Flying fish
3 Sea gulls or other birds
4 Whales
5 Wild shangrayl
(migrating herd of giant sea slugs (think manatees) that make fart sounds with their mouths)
6 Island turtle (zaratan)
(usually covered with the weird plants and animals that can survive it's infrequent dives)
7 Island jellyfish (zaraphora)
(nice place, but don't go into the water or pop the balloon-mountain-floatation device)
8 Island tree (pelagic dendriculi)
(more like a loose raft of floating banyans, leaves adjust for the wind, flat roots paddle the water)
9 Glowing jellyfish river
(huge phosphorescent flocks, resemble a glowing river at night, said to lead to treasure)
10 Roamy grizzlewisps
(Sort of like paper-thin balloons in the shapes of bears, eating plankton from the surface)
11 Vegnasnicken
(Huge migratory sea snakes that take naps on deck, harmless only if not annoyed or woken up)
12 Floating forest (tend to be populated, roll 3x for other encounters)
(Floating kelp trees use flammable gas balloons to lift their fronds nearer to the sun) 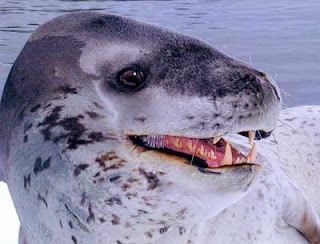 1 Mating
2 Just passing through (migrating or following the boat)
3 Fighting or eating (but will otherwise ignore you)
1 Harmless Sea Creatures
2 Dangerous Sea Creature (roll again)
3 Another Ship (roll on random ship encounters)
4 Hunting something else, but will happily hunt you as well
5 Hunting Happily
6 Hunting Desperately 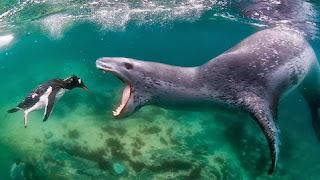 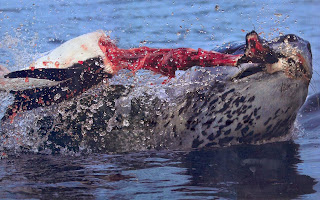 I'll do Other Ships in a separate post.  Merchants, pirates, poets, madmen, etc. 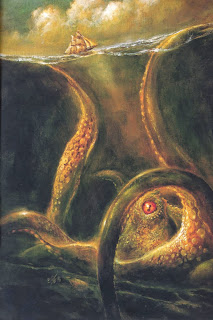 Not a species, but a singular creature.  Most believe it to be a creature older than all of history, a servant of gods that have been dead for millions of years.  It has a brilliant mind, although it does not and cannot ever understand language.  But it's better known for it's impossible capacity for emotions.

Those who communicate with it magically, report loneliness and frustration beyond that of any human capacity to feel. In the same way that a creature may be much, much more intelligent than another, the kraken is capable of much, much more emotion than any other creature on the planet.  A hyper-intelligent creature is called a genius, but there is no comparative word for a hyper-emotional creature.  There is only the Kraken.

Its body is that of a huge squid, smooth and completely unblemished.  It regards the world through eyes the size of wagon wheels.  It can change its color freely, but is most usually red, black, purple, or blue. It has been described as "calming in its perfection and symmetry, though terrifying in its actions".

The Kraken prefers to swim though distant oceans, hunting whales visiting the poles.  On the ocean floor, it visits dead cities, sifting through the silt and reexamaining the detritus, like an elephant handling the bones of a dead parent.

Humans usually only have a few types of experiences with it.

The Kraken may sometimes be seen, swimming along the surface of the open ocean, on its way to some distant locale.

The Kraken sometimes swims into the harbor of a city and spends several days observing the inhabitants with its huge eyes. Cities that dare attack it are usually destroyed (or at least, all of the parts of the city within 200' of the water).  Sometimes it leaves recovered artifacts on the docks.

It sometimes approaches ships at sea out of a sense of curiosity (although our language is insufficient to describe (or even understand) its emotions and motivations).  It usually tears the deck off the ship and then examines the cargo and crew. Creatures and crates will be picked up and examined. The kraken has powers over flesh, and creatures will mutate powerfully and instantly in its grip. Some of these mutants seem to displease the Kraken, and will be torn apart instantly. Others will be returned to the ship or the ocean, depending on whichever environment it is more suited for. No one knows what the Kraken hopes to accomplish by this, but empaths that have read the Kraken's emotions at this time report that it "sighs" after every failed attempt. 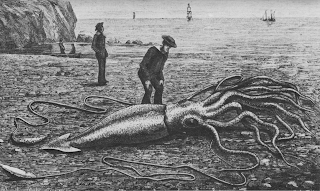