Once there were many gods.  There was Toranga-lusus, the god of creation and destruction, who created the world from the air and then destroys it with fire and waves.  There was Boru-galalan, the god of war and peace, who created humans and animals to make war upon each other and then find peace.  There was Mogo-vatika, the god of law and chaos, who gave us names and the madness of old age.  Then there was Toa-Makakang, the god of fertility and starvation, who invented sex after one hundred years of confusion.

All of our gods had two names and two faces.  Two genders and two domains.  They are all dead now, but we still remember then.

When Toa-Makakang gave birth to the Leviathan, the sky was torn asunder and the stars fell to the earth.  The earth spat venom, to kill the Leviathan, and from the cloud-mansions there issued lightning to strike the creature dead.  Finally, all of the waters of the earth came and piled atop Balalang, to drown the Leviathan.  We all drowned then.

But the Leviathan devoured the poison, and became venomous.  Then it grew its ten-thousand triangular scales that rattle in the light, and the lightning slid off.  Finally it swallowed all of the water of the oceans, and grew larger than any other thing.

Finally, it devoured the gods. 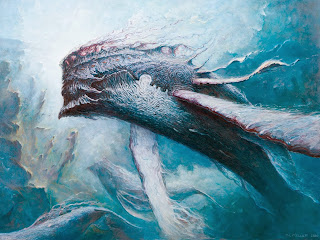 When it was done, it looked to the drowned people, and said to them, "You are drowned, and now you are nothing."

The drowned spirits replied, "We have died, O Leviathan, but please return us to life and we will be yours forever."

The Leviathan spoke, "I owe you nothing.  Your own gods destroyed you.  But I will do this thing that you ask, and you will be mine forever."

Those who were loyal to the Leviathan he restored to life, and placed on Balalang where we have lived ever since. 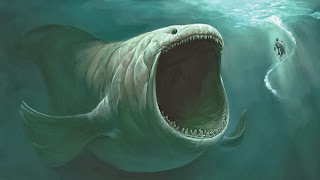 We are the Balalangans, the People Who Once Drowned.  For seven thousand times seven thousand cycles we have served the Leviathan, who we call by many names.  Grandfather Count-the-Days.  The Great Devourer.  The Swallower of Whales. 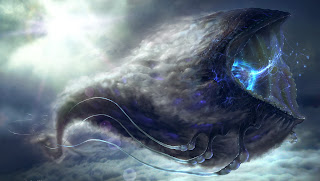 We are whalers.  You will see us on our black canoes, like long flat knives against the water.  There is no profession more noble than whaling.  Against big whales, we sometimes jump from the boat and drive our harpoons deep into the whales body.  We are great jumpers, and do not burden ourselves with excess weight.

We hunt whales in imitation of the Leviathan, who we serve in all things.  This is why we must eat a part of every creature that we kill.  If the creature is poisonous, we must cook it or find a way to make it not so.  If it is still poisonous, we will cook it and bake the ashes into a black bread.

Demons are always poisonous, and our magicians conjure them from the brains of octopi (who dream of mad and distant lands) and slay them.  The demon corpses are then burnt and baked into black bread, which is where men get their magic from.

Women get their magic from the stars, because the moon, because their bodies and souls follow the tides.

We honor the Leviathan by bathing in the hot blood of sacrificed animals and by swallowing life fish.  We comfort him by sailing out to a secret place that only we know, over very deep water, and binding a holy woman in heavy chains, and then throwing her overboard.  The priests accompany her as she sinks, and perform final rites on her body as she descends into the abyss where the Leviathan dwells. 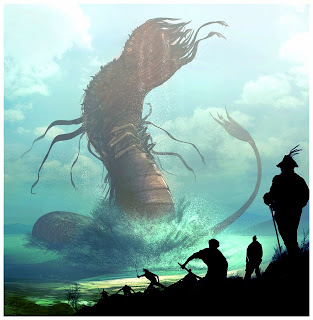 During these dives, the priests are gone for several minutes, but it is said that in olden days, they descended for hours, and even entered the presence of the Leviathan.

The priests are divers and swimmers.  The warriors can see long distances and jump great lengths.  By these methods, a man may be recognized after he is reborn, and then reclassified according to caste.  If a man cannot jump over three others, nor hold his breath for five minutes, he is a farmer, and if his farm fails, he becomes a slave of the priests'.

True kings and queens are not burned by hot coals, but they are usually accompanied by so many other miracles that it is usually not necessary.

We do not worship the Leviathan, but we honor him.  When the priests tell us that the Leviathan requires us to go and kill men in distant places, we do so.  The priests are usually obvious to find in any community, since their faces are always blacked by smoke from burning octopi.

We do not worship our dead gods, who drowned us, but we still call upon their spirits for miracles.  Even in death, they have some small power.

This is how we implore one of the dead gods for a miracle:  We carve a statue out of tan wood, and anoint it with fragrant oils so that it becomes a part of their body.  Then we strike the statue with blades and insult it, and promise it greater pains if it does not comply.  Since all gods have been devoured by the Leviathan, they feel pain and will perform the miracle out of fear.

Every town has a totem of their patron in the center, which is pissed upon and attacked with staves.  Everyone curses the god as they pass it, and this is the proper way to behave towards a god, since they failed the world and died so pathetically.  Even though gods have some power yet remaining, they dare not strike as us, who are protected by the Leviathan.

One day, one of us will kill the Leviathan, and cut our old gods from his belly, and make them our slaves.  And so every generation, one or two warriors, veterans of hundreds of whale hunts, will go to the house of the Leviathan and do battle with him.  The Leviathan always devours the warrior, but one day we will triumph.

There are petty demons and evil spirits everywhere.  They attack those who are healthy and victorious.  For this reason, when a child is born, the family cries, "What a wretched pup we have spawned!  How ugly and sickly!"  And when two Balalangans meet, they first spend some time complaining to each other of their health ailments, in case their are any demons nearby.

Because of the importance of eating, the traditional greeting is, "Have you eaten yet?"  Anyone who visits the home of a Balalangan will be offered food.  If they accept the first offer of food, they are either starving or very rude.  It is only acceptable to accept an offer of food if it has been offered three times, or more.

The power of a person is stored in the crown of their head.  If another person touches it, the power is stolen.  For this reason, we cover our heads with cowls, only removing them for important moments when we need all of our power, such as warfare, whaling, ceremonies, and sex.

If another man touches you on the head during a fight, you must become his slave until you have earned back your power.

This is why we make shrunken heads of great warriors, or of our ancestors.  We keep them in shrine houses and touch the crowns of their heads before important moments.  Sometimes we even wear them on our belts, but still, a shrine is the proper place for them.

The Leviathan knows of this and agrees, for it is proper that the strong should devour the weak, and everything weakens with age.  It doesn't matter how many cycles it will take, even if it should be seven thousand times seven thousand a thousand times.  We will sharpen our harpoons and clean our muskets, and when we kill the Leviathan that we serve, we will eat him and never be hungry again. 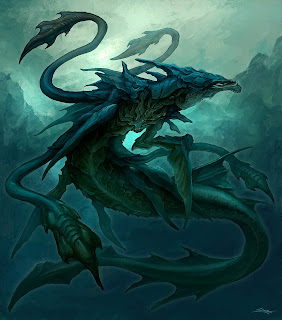 Don't think of them as mud-dwelling savages.  These are primitive people who have felt the touch of colonialism.  A generation ago they might have lived in huts and carved canoed with stones, but now they have steel and stolen guns, from which shrunken heads and other fetishes dangle.  Their church is an actual church, but the crucifix is made from harpoons bound together with tanned man-leather, and a pair of tiny sharks circle in the baptismal font.

This is made for +Richard G's Post-Colonial Heistcrawl, which is sort of a brilliant-weirdgood combustion of 1600's colonialism in southeast Asia and all sorts of buffet-style madness.  If you are curious, there's a good chance that you're about to click this link to find out more.

Email ThisBlogThis!Share to TwitterShare to FacebookShare to Pinterest
Labels: heistcrawl